Did Trump Say 'Anyone Being Investigated by the FBI Is Not Qualified To Be President'?

Occupy Democrats shared a meme with this purported Trump quote after news broke that his Mar-a-Lago property had been searched by the FBI. 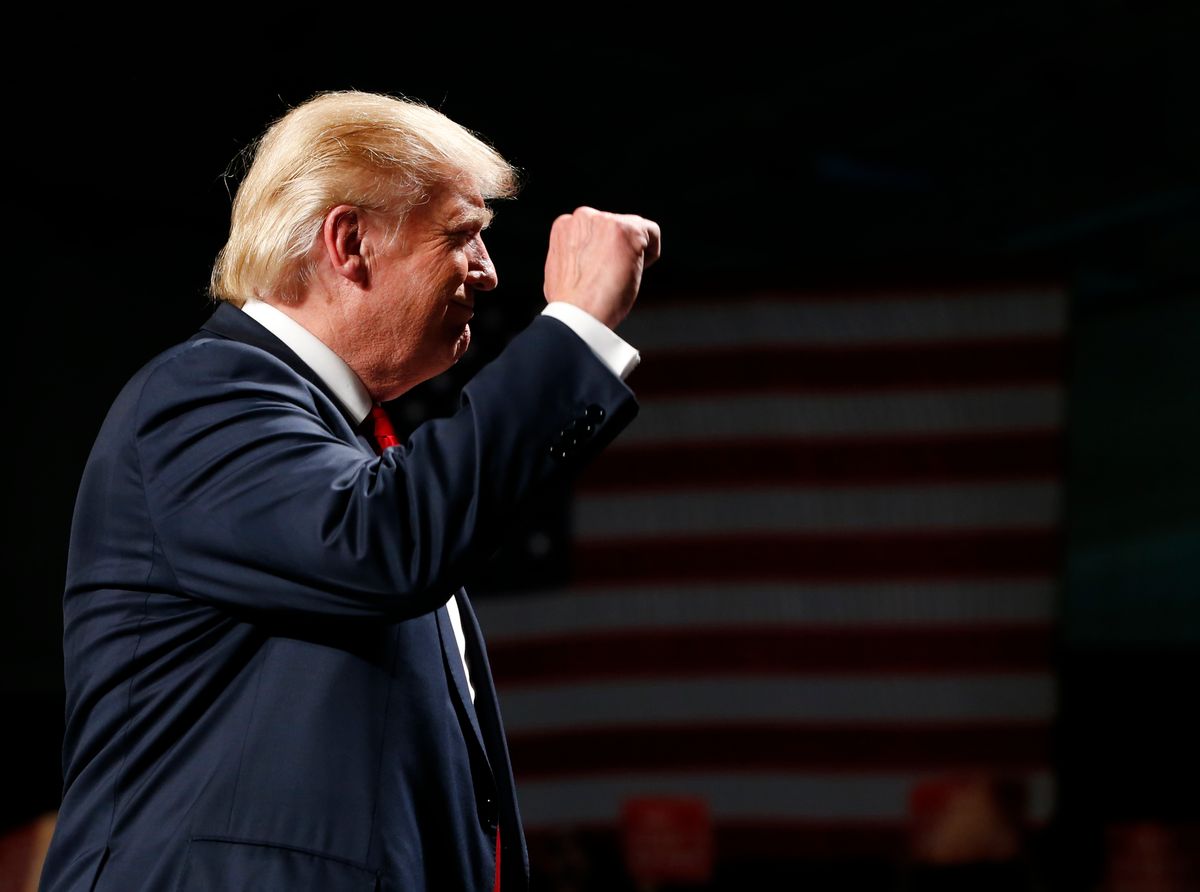 Claim:
Before being elected to the presidency, Donald Trump said, at least six times, that "Anyone being investigated by the FBI is not qualified to be the president of the United States."
Rating:

We were unable to find statements by Trump using these exact words, outside of memes and social media posts claiming that he did. Below, we documented other, somewhat similar quotes by him and others that bear on the central theme of this claim.

On Aug 8, 2022, news broke that the FBI had executed a search warrant at former U.S. President Donald Trump's Mar-a-Lago property in Palm Beach, Florida. In response, Occupy Democrats and a number of other social media accounts shared a quote meme that claimed Trump had said several times in 2016, "Anyone being investigated by the FBI is not qualified to be the president of the United States."

We were unable to find evidence that Trump ever said these exact words.

The supposed quote was widely shared on Twitter, both as a meme and in text form:

According to The New York Times, the FBI's goal of searching of Trump's estate was "to obtain information related to his handling of classified information." This matter was "separate from the Justice Department’s investigation into the Capitol attack on Jan. 6, 2021, according to multiple people familiar with the investigation," the Times reported.

The Birth of the Meme

The "not qualified" quote and meme that mentioned Trump and an FBI investigation may have been born out of a previous tweet from March 24, 2017. In that tweet, the same rumor was spread with a message in favor of impeaching him from office.

This meme mentioned more dates from 2016 than the subsequent Occupy Democrats version did.

Four days before this tweet was posted in 2017, The New York Times had reported that the FBI was "investigating whether members of President Trump’s campaign colluded with Russia to influence the 2016 election."

Four years later, The Associated Press reported the findings of the Republican-led Senate Intelligence Committee. The committee issued its fifth and final report on Russia’s efforts to interfere in the 2016 U.S. presidential election and detailed the extent to which Trump campaign officials had involvement in the matter:

The Trump campaign’s interactions with Russian intelligence services during the 2016 presidential election posed a ‘grave’ counterintelligence threat, a Senate panel concluded as it detailed how associates of Donald Trump had regular contact with Russians and expected to benefit from the Kremlin’s help. […] Russia launched an aggressive effort to interfere in the election on Trump’s behalf. It says the Trump campaign chairman had regular contact with a Russian intelligence officer and that other Trump associates were eager to exploit the Kremlin’s aid, particularly by maximizing the impact of the disclosure of Democratic emails hacked by Russian intelligence officers.

In our searches for the origins of the purported "not qualified" Trump quote, we did locate several remarks by him that bear on the central theme of this claim.

For example, Time.com reported that on Nov. 2, 2016, Trump said, "If Hillary Clinton were to be elected, it would create an unprecedented and protracted constitutional crisis." He was referencing the fact that the FBI had just announced days earlier that it had reopened the investigation into the former secretary of state's emails.

On Nov. 3, Trump mentioned Clinton being under FBI investigation in a speech in Selma, North Carolina. According to a transcript from Factba.se, a website that transcribes presidential speeches, he also mentioned the word "disqualified."

On Nov. 5, Trump said that Clinton's "current scandals and controversies" would make it "impossible for her to govern."

The quote from Trump that might be closest to the "not qualified" message in the meme came from a speech in Grand Rapids, Michigan on Oct. 31, 2016 (a date that was not included at the bottom of the meme).

According to a video of the speech, Trump referenced over the course of several sentences the FBI's reopening of the investigation into Clinton and, separately, that he felt she was "unfit and unqualified." The remarks begin below at the 13:06 mark in the video:

A transcript of Trump's remarks from Oct. 31 went as follows:

Hillary is likely to be under investigation for a very long time. One of her long time supporters, a top Democratic pollster, good guy, smart guy, sharp guy, Doug Schoen, is now totally withdrawing his support. He's supported their family for years.

He wrote in an article -- he wrote in an article, "I'm a Democrat. I worked for Bill Clinton. But I can't vote for Hillary." And this is so important. Now, I don't think that's gonna happen so hopefully. That happens, we did a bad job out here, folks.

Schoen warns that if Hillary is elected, she would be under protracted criminal investigation and probably a criminal trial, I will say. So we'd have a criminal trial for a sitting president. In the meantime, Putin -- who she likes to say bad things about -- and all of the other leaders, many of whom she says bad things about, then you wonder why the world hates us. But all of these people will sit back and they will laugh and they will smile.

While the speech may have indicated Trump's apparent concern with a sitting U.S. president being the subject of an FBI investigation, the remarks did not contain the quote attributed to him in the Occupy Democrats meme.

According to CNN.com, Clinton was once again cleared of wrongdoing on Nov. 6, 2016, just two days before Election Day. The investigation into Clinton did not last "for years," as Trump had claimed it would.

Trump also tweeted at least six times in 2016 that Clinton was "unqualified" or "not qualified" to be president. However, none of the tweets specifically mentioned the FBI investigation and all of them were tweeted well before the dates mentioned at the bottom of the Occupy Democrats meme.

Former Democratic presidential primary candidate and U.S. Sen. Bernie Sanders said on April 6, 2016 that he believed Clinton was "not qualified." But according to The Atlantic, Sanders did not mention the remarks during the speech with anything related to Clinton being investigated by the FBI. According to ABC News and CNN, Sanders appeared to "backtrack" a bit on his "not qualified" remarks later that same week.

As for people who were in Trump's corner, former Trump White House counselor Kellyanne Conway once tweeted on June 7, 2016, "#Hillary made history today:we've not nominated someone under FBI investigation whom a majority of Americans says not trustworthy not honest."

Sarah Sanders, who served as one of Trump's White House press secretaries, tweeted on Nov. 3, 2016, "When you're attacking FBI agents because you're under criminal investigation, you're losing." This was a genuine quote:

Occupy Democrats also shared this Sanders' quote in the aftermath of the FBI's search of Trump's property.

In sum, we were unable to find evidence that Trump said the words, "Anyone being investigated by the FBI is not qualified to be the president of the United States." Further, Factba.se also reached out to us and said that they, too, were unable to locate the quote in any past transcripts. For these reasons, we have rated this claim as "Unproven."

Calfas, Jennifer. Here’s What Trump Said in the Campaign About a President Being Under Investigation. Time.com, 15 June 2017, https://time.com/4819919/donald-trump-obstruction-justice-investigation/.

Chavez, Paolo, and Veronica Stracqualursi. Bernie Sanders Explains Why Hillary Clinton Is Both Qualified and Unqualified to Be President. 8 Apr. 2016, https://abcnews.go.com/Politics/bernie-sanders-explains-hillary-clinton-qualified-unqualified-president/story?id=38258722.

Report of the Select Committee on Intelligence, United States Senate on Russian Active Measures Campaigns and Interference in the 2016 U.S. Election. 2020, https://www.intelligence.senate.gov/sites/default/files/documents/report_volume5.pdf.