Did Trump Have a 'Diet Coke' Button in the Oval Office?

With a push of a button, former President Donald Trump could summon a Diet Coke to the Oval Office. 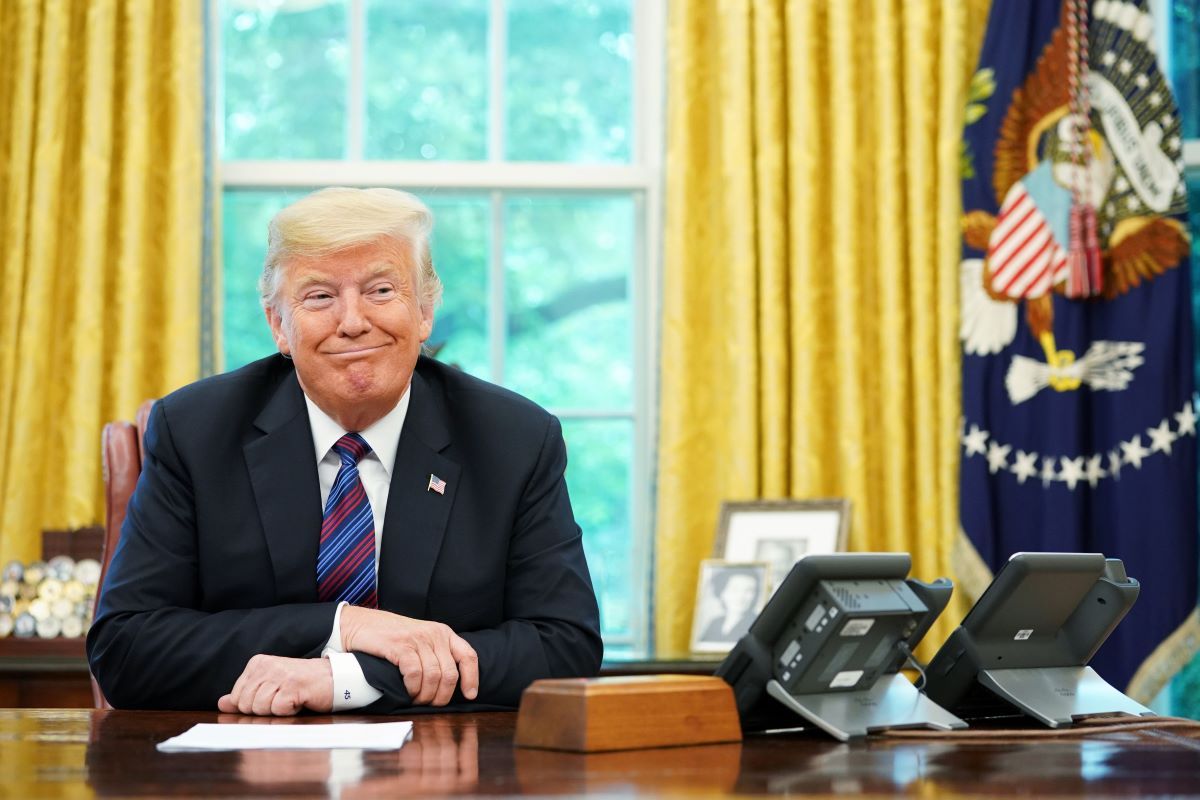 Trump had a button in the oval office that was used for ordering Diet Cokes.

This button was not used exclusively for ordering Diet Cokes, nor was it installed during the Trump administration. Previous presidents also used this general service button.

It should also be noted that Biden still has access to this usher call button and photographs show him in the Oval Office with this button on his desk. It's unclear how Biden will use this service button, but he will be able to use it, like his predecessor, to order Diet Cokes or anything else available at the White House.

Richard Branson, the CEO of Virgin Airlines, wrote in his autobiography that Obama once told him the button was used to order tea for his guests:

As we stood up to leave I noticed the red buttons on his desk. Obama saw me looking at them. "They used to be there for emergencies, but now I use them for ordering tea for my guests."

"They used to be there for emergencies, but now I use them for ordering tea for my guests."

Trump's soda button first made the news in April 2017, when news outlets published articles concerning Trump's first 100 days in office. At the time, reports stated that this button summoned a regular "Coke" for the president.

Here's an excerpt from reporter Julie Pace's article "Nearing 100 days, Trump says his presidency is ‘different’" that was published by The Associated Press:

"A man accustomed to wealth and its trappings, Trump has embraced life in the Executive Mansion, often regaling guests with trivia about the historic decor. With the push of a red button placed on the Resolute Desk that presidents have used for decades, a White House butler soon arrived with a Coke for the president."

Demetri Sevastopulo relayed a similar anecdote for the Financial Times. Like Pace, Sevastopulo also noted that Trump could press the button to "order some Cokes":

Sitting across from Donald Trump in the Oval Office, my eyes are drawn to a little red button on a box that sits on his desk. “This isn’t the nuclear button, is it?” I joke, pointing. “No, no, everyone thinks it is,” Trump says on cue, before leaning over and pressing it to order some Cokes. “Everyone does get a little nervous when I press that button.”

While the initial reports noted that this button summoned Cokes, not Diet Cokes, Trump had a known affection for Coca-Cola's lighter offering. In December 2017, The New York Times reported that Trump, who once tweeted "I have never seen a thin person drinking Diet Coke," would consume as many as 12 Diet Cokes a day:

"Watching cable, he shares thoughts with anyone in the room, even the household staff he summons via a button for lunch or for one of the dozen Diet Cokes he consumes each day."

Former Trump administration communications aide Cliff Sims also mentioned this Diet Coke button in a passage from his White House memoir, "Team of Vipers: My 500 Extraordinary Days in the Trump White House." Sims was describing a meeting between Trump and Housing Secretary Ben Carson when he wrote:

I could see Trump starting to lose interest as Carson continued articulating the detailed plans inside his notebook. First, the President shifted in his chair and readjusted a small pillow he'd placed behind his back. Then, as Carson talked about different phases of his program and whatnot, Trump glanced around the room. At some point he noted his Diet Coke was nearly gone and went back to his button routine, but his heart wasn't quite in it this time. "People always wonder about this button," he told a confused Carson.

Finally, he pressed it again. Diet Coke arrived and Trump was done.

Trump's Diet Coke button was also featured in the monologues of at least one late night talk show. In April 2017, Stephen Colbert talked about Trump was "turning the Oval Office into a treehouse" by putting a diet coke button on the Resolute Desk.

Trump did indeed have a button in the Oval Office that he used to order Diet Cokes. This service button, however, was not novel to the Trump administration.

Updated [25 January 2021]: Updated to note that President Trump was not the first president to have a call button on his desk and that President Biden still has access to this service button. Status changed to Mixture.