Was ‘TRUMP’ Carved into a Florida Manatee’s Back?

Harassing a manatee comes with a price tag of up to $100,000 if convicted. 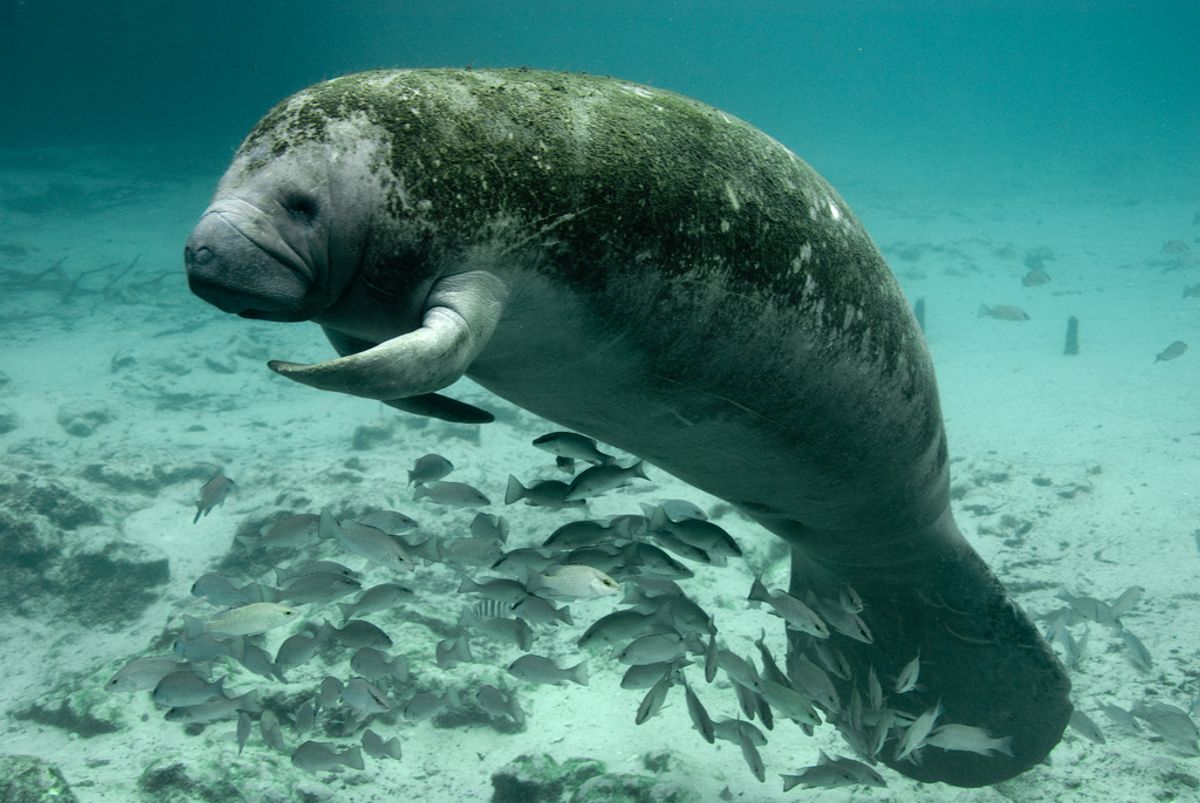 Claim:
An endangered Florida manatee was discovered with the word “Trump” carved into its back.
Rating:

The name "Trump" was etched into the algae on the back of a manatee. Wildlife officials have reportedly confirmed that the animal did not experience any serious injuries.

Earlier reports suggested that name had been "carved" into the mammal's back, resulting in "serious scarring," but this was not accurate.

In mid-January 2021, Florida wildlife officials announced that they were investigating the illegal harassment of a threatened Florida manatee after it was discovered that the word “Trump” was etched into the mammal’s back.

The incident was first reported by the Citrus County Chronicle, a newspaper in Crystal River, Florida, on Jan. 11, 2021. That report said that someone had “scraped” the U.S. president’s name into the mammal’s back. That same day, the Center for Biological Diversity published a news release that claimed the word was "carved" into its back and that the animal suffered "serious scarring in the form of the president's name."

A video of the manatee subsequently received worldwide coverage and went viral when media personality Exavier Pope shared a video of the mutilation on Twitter.

The manatee was discovered in North Florida’s Homosassa River on Jan. 10. But it is important to note that these earlier reports have since been revised after it was confirmed that “Trump” was not carved into the animal’s back, but rather written into its algae. Manatees are slow-moving animals that live near the surface of warm and tropical waters, making their backs and tails ideal for algae to grow. Several news publications have reported that wildlife officials do not believe that the animal suffered any serious injuries. Snopes sent an email to the U.S. Fish and Wildlife Service (FWS) for further corroboration but did not receive an immediate response.

The Center for Biological Diversity released an edited statement by the following day that replaced the word “carved” with “written” and excluded any mention of “serious scarring.” In a follow-up email to Snopes, the organization said that it had written its original news release based on “incorrect published reporting” and the update was based on new information from wildlife experts.

“We continue to be concerned that this creature was harassed in violation of state and federal law. These animals are sensitive and very vulnerable, and human beings shouldn’t mess with them,” wrote Jaclyn Lopez, Florida director at the Center for Biological Diversity.

Manatees in the Sunshine State belong to the West Indian species, scientific name Trichechus manatus latirostris. The large, seagrass-grazing mammals are found throughout the Caribbean Basin, from the southeast U.S. to northeastern South America. With a range-wide population of at least 13,000 — about half of which are in Florida — the so-called sea cows are threatened, meaning that they are likely to become endangered within the foreseeable future.

"West Indian manatees are essential members of the ecosystems in which they inhabit and are protected under the Endangered Species Act and the Marine Mammal Protection Act," said Aurelia Skipwith, director of the FWS, in a statement emailed statement to Snopes.

Due to their threatened status, these vegetarians are protected under the U.S. Marine Mammal Protection Act of 1972, the U.S. Endangered Species Act of 1973, and the Florida Manatee Sanctuary Act of 1978. It is illegal to interfere with manatees under Florida state and federal laws, including harassing, harming, wounding, or annoying the sea cows. And those convicted of violating federal-protection laws could face fines up to $100,000 and up to one year in jail, according to the Florida Fish and Wildlife Conservation (FWC).

“It’s heartbreaking that this manatee was subjected to this vile, criminal act,” said Lopez in the news release. “It’s clear that whoever harmed this defenseless, gentle giant is capable of doing grave violence and needs to be apprehended immediately.”

It is unknown when the vandalism occurred or the political affiliation of those involved, but the Center offered an award of $5,000 for any information leading to the conviction of the perpetrator. Anyone with information may call the FWC hotline at 888-404-3922. Additionally, the U.S. Fish and Wildlife Service can be reached by phone on its tips hotline at 844-397-8477 or by email at fws_tips@fws.gov.

Update [Jan. 12, 2021]: An earlier version of this article incorrectly stated that the word “Trump” had been “carved” into the manatees back, resulting in “serious scarring.”