Did President Trump Fail to Place His Hand Over His Heart During George H.W. Bush's Funeral? 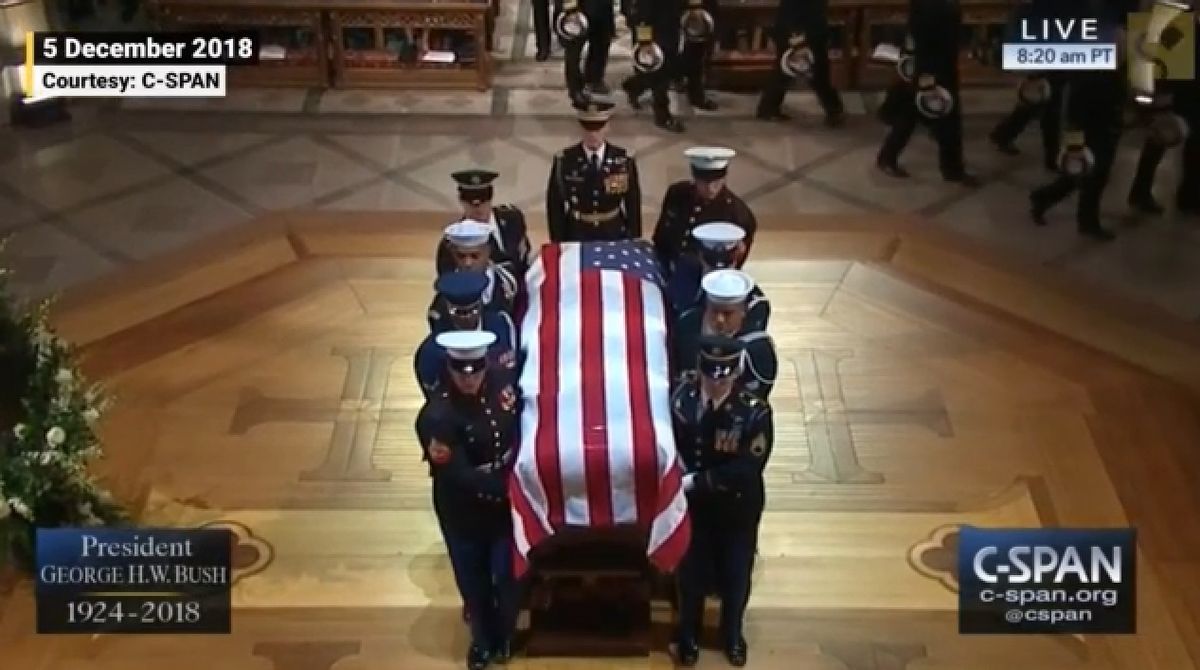 Images show President Trump with his hands at his side during President George H.W. Bush's funeral while other government officials and civilians had their hands placed over their hearts.

As former President George H.W. Bush's casket was carried into the Washington National Cathedral for his state funeral on 5 December 2018, many of the attendees, including former presidents, family members, and lawmakers, placed their hands over their hearts as a sign of respect for the 41st President of the United States. A number of social media users claimed, however, that President Trump failed to do the same.

Here are a few screenshots of the moment that were shared on social media as well as their accompanying comments: Idiot Trump refused to place his hand on his heart while saying goodbye to President George H. W. Bush like everyone else in the room.

I don’t blame Trump. He has no heart.

Wow, Trump without his hand over his heart. #GeorgeHWBushFuneral #Remembering41

So nobody gonna talk about how Trump the only one without his hand over his heart?

These screenshots are all genuine. At one point during the funeral, as George H.W. Bush's casket was borne into the cathedral, President Trump did not have his hand placed over his heart while several other politicians did. However, that wasn't the entire story.

President Trump did have his hand placed over his heart just a few moments earlier, as the casket was carried past the pew where he was standing. This moment was not visible in the telecasts aired by Fox News, C-SPAN, CNN, or many of the other news networks, but it can be glimpsed in photographs hosted by Getty Images. President Trump simply dropped his hands to his sides after the casket passed him by, while other government officials kept their hands on their hearts until the casket was at rest and the military guard that accompanied it had departed:

It's a little difficult to see, but a video uploaded by TIME magazine captured the moment when President Trump (and Vice President Mike Pence) lowered his hand from his heart (just over the top right of the casket at the 2:44:12 mark):


President Trump also wasn't the only person who had his hands at his sides at some point while the casket was carried in. In the following clip from C-SPAN, former President Jimmy Carter (second from the right in the front pew) can be seen in a pose similar to that of President Trump:

Furthermore, President Trump put his hand over his heart again (as did many of the other attendees) later in the funeral, as the casket was borne out of the cathedral:

President Trump had his hand over his heart as George H.W. Bush's casket passed his pew. He dropped his hand shortly afterward, however, while many (but not all) of the other government officials and civilians in the front row kept their hands over their hearts until the casket was at rest. President Trump then also placed his hand over his heart as the casket was carried out of the cathedral at the conclusion of the services.

Although screenshots showing President Trump with his hands at his side during the funeral are genuine, claims holding that Trump "failed" to put his hand over his heart, that he "disrespected" George H.W. Bush, or that he was the "only person" not to perform the gesture are misleading (if not entirely inaccurate).

This criticism is also largely based on the notion that government officials and civilians are expected to place their hands over their hearts during certain moments of a state funeral. We spoke to a former government official involved in protocol about the issue, who told us that although former presidents and other civilians might engage in the hand-over-heart gesture as a casket passes by, that symbolic action is directed at the U.S. flag draped over the casket and not at the deceased.

We examined videos of the funerals for President Gerald Ford and President Ronald Reagan and likewise found that although many attendees held their hands over their hearts as the caskets entered and exited the cathedral, the gesture was not unanimously employed.