Was Trump Given a ‘Bay of Pigs’ Award?

The Bay of Pigs refers to the failed 1961 invasion of Cuba led by U.S. Special Forces. 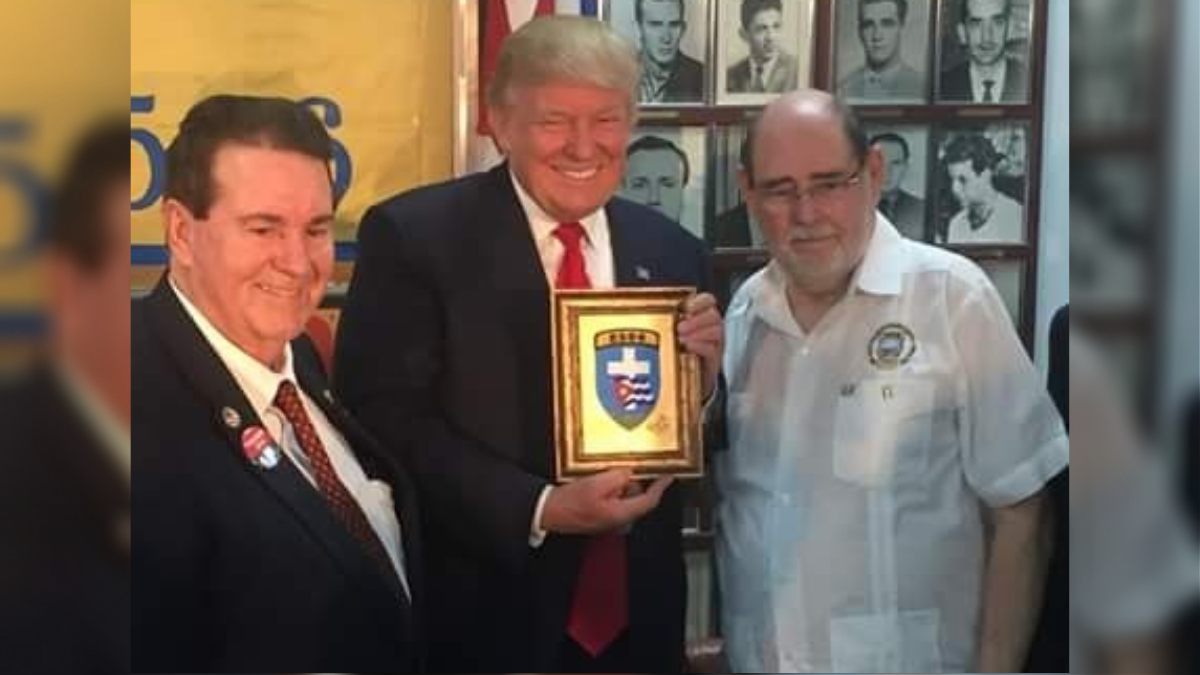 In 2016, then-presidential candidate Trump received the endorsement of a group of Bay of Pigs veterans, who also presented him with a framed, hand-painted image of the Shield of Brigade 2506, which Trump described in 2020 as a "Bay of Pigs Award." In a press release published four years after the fact, the Veterans Association Brigade 2506 recast the gift as a "recognition award."

However, the item was not described as an award at the time by those who presented it to him, nor in contemporaneous news coverage of the event, which focused mainly on the endorsement.

As the 2020 general election in the U.S. approached, the Democratic and Republican presidential candidates took turns jabbing their opponent with dubious accusations and boasts of self-promotion.

On Sept. 13, U.S. President Donald Trump continued the barrage when he reportedly bragged in a tweet that he had once been given the "highly honored Bay of Pigs Award," sparking controversy after some media outlets claimed the award did not exist, while others argued that the tweet was an attempt to sway Latino voters in the battleground state of Florida. The president reiterated his claim of receiving of the award on Sept. 13 in Las Vegas, Nevada, during the Latinos for Trump Coalition roundtable.

“As you know, a little while ago, I received the Bay of Pigs Award from the Cuban Americans in Miami,” said the president. “That’s a big honor and they don’t give it out easily.”

It is unclear whether the "Bay of Pigs Award" Trump says he received is a formally sanctioned token of recognition. Either way, Trump was recognized by the Bay of Pigs Brigade 2506 Association in 2016 as part of the organization’s endorsement for his first presidential campaign. It was the first time that the brigade had formally endorsed a presidential candidate.

(An important distinction to note: The group that represents the remaining members of the failed 1961 invasion at the Bay of Pigs do not collectively stand for Miami Cubans, or the general Cuban population, as Trump alluded to in his tweet).

The controversy began shortly after the president tweeted about the recognition when several media reports claimed that he had mistaken the Bay of Pigs endorsement for an official award.

The Bay of Pigs Brigade 2506 veteran group is housed at the Bay of Pigs Museum and library in Miami’s predominantly Cuban neighborhood, Little Havana, and described its association as a group of “freedom-loving, Cuban patriots from all walks of life.” During the Cold War, U.S. Special Forces recruited and trained members of the Frente Revolucionario Democratico (FRD), a group of Cuban exiles that left the island nation when revolutionist Fidel Castro took control of the Cuban government. These soldiers took part in the failed 1961 attack located in Cuba's Bay of Pigs, which was meant to catalyze an uprising in an attempt to overthrow the Cuban government of Castro, according to the CIA.

Trump first visited the Bay of Pigs veterans in 1999 when he was dancing with the idea of a presidential run on the Reform Party of the United States of America (RPUSA), a political party founded by Ross Perot in 1995 self-described as a “moderate, centrist and populist party that sits in the center of the political spectrum.” During his 1999 visit, the billionaire was presented with a plaque of the shoulder patch worn by soldiers during the invasion, reported The Associated Press at the time.

CNN reporter Daniel Dale first fact-checked Trump’s claim about the award in September 2020, adding that it was likely his “unprecedented endorsement” from the Bay of Pigs veterans that the president was referencing but that an official Bay of Pigs Award per se does not exist. The president has a history of touting fake awards, including a digitally manipulated Time magazine cover that featured Trump, and multiple false claims that he had won Michigan’s “man of the year” award.

Contemporaneous news coverage of the 2016 event focused mainly on the endorsement and mentioned in passing that the group had honored Trump by presenting him with a framed image of the Shield of Brigade 2506. Notably, no one in the veterans group was quoted as describing it as an "award" at the time, nor was it described as such in any media coverage of the event.

Trump War Room, the official Twitter for the Trump campaign, responded to Dale's tweet by sharing a photo of Trump holding a “hand-painted Brigade 2506 shield” while standing next to two unnamed men as evidence that he did, in fact, receive an award. A news release written by President of the Veterans Association-Brigade 2506 Juan López de la Cruz on Sept. 13, 2020 -- some four years after the fact -- said Trump had received a "recognition award" from the group in 2016. The statement went on to say the following:

It was with great satisfaction that we read President Donald J. Trump’s twitter mentioning the event in which the Veterans Association-Brigade 2506 presented a recognition award, consisting of the emblem used by our patriots during the battle of the Bay of Pigs Invasion, Cuba, 1961.

The award was presented to President Trump for the purpose of recognizing his political and social platform, which is in line with the conservative beliefs of our organization and his objectives of ending totalitarian regimes, drug and human trafficking and human rights abuses in our hemisphere and beyond.

We know what it is to live under socialism and we reject the efforts and the terrorist tactics that the extreme left is using to transform this country, our adopted country, into a socialist state. We know that President Trump will restore unity and law and order to the streets of our cities.

We strongly support and endorse President Trump and his campaign for the Presidency of the United States of America. His many accomplishments fully justify his reelection and the continuation of his efforts to Make America Great Again.

UPDATED [Sept. 16, 2020]: Rating updated to “Mixture” to better capture nuance in the original story around the use of the term “award.”