It's often difficult to make out the specifics of an intentionally generic image. 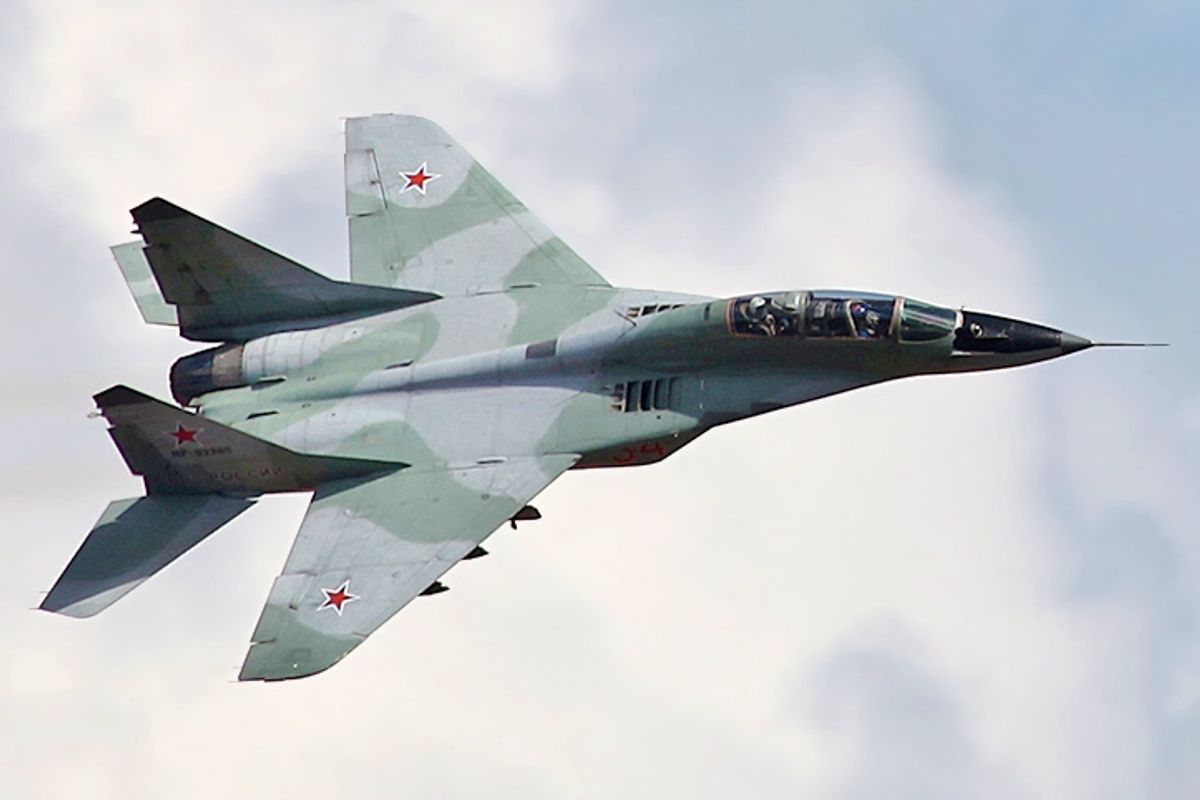 Claim:
A "Support Our Troops" ad from the 2020 Trump campaign featured an image of Russian fighter jets.
Rating:

In September 2020, an image supposedly showing a "Support Our Troops" ad that was put out by U.S. President Donald Trump's presidential campaign started to circulate on social media — along with the claim that it featured Russian fighter jets: This is a genuine ad that was released by the Trump Make America Great Again Committee, and the planes featured in this political advertisement are indeed Russian jets.

Politico was first to report on the error, writing:

A digital ad released by a fundraising arm of the Trump campaign on Sept. 11 calling on people to “support our troops” uses a stock photo of Russian-made fighter jets and Russian models dressed as soldiers.

The ad, which was made by the Trump Make America Great Again Committee, features silhouettes of three soldiers walking as a fighter jet flies over them.

According to the Google Transparency Report, this ad ran from Sept. 8 to Sept. 13.

Here's a comparison of the image used in the Trump campaign ad (top) and a photograph taken by Reuters photographer Gleb Garanich (bottom) of a Mikoyan MiG-29 near a Ukraine airbase in 2016: This is at least the second time that the Trump campaign has mistakenly used images of Russia's military in political advertisements. A 2016 Trump campaign ad featured an image of Russian military ribbons. When the campaign was alerted to the mistake, they replaced the ribbon image with an image supposedly showing Trump touching the face of a wounded veteran. That image, too, was misleading, since the "wounded veteran" in that image was not actually a veteran and did not lose his arms in combat.

Ruslan Pukhov, director of the Centre for Analysis of Strategies and Technologies in Moscow, told Politico that the planes in this image were Russian MiG-29s. Politico also got in contact with Arthur Zakirov, the creator of the image, who confirmed that the image featured 3D models of the MiG-29. Zakirov went on to say that this image was a composite of several different elements. The mountains in the background, for instance, come from Greece, and the soldiers in the foreground are taken from various armies.

Zakirov blamed the Trump campaign's error on "bad fact-checking" and "inattention" to detail:

"This is a completely recreated scene from various photographs of mine ... Everything happened through inattention."

While the Trump campaign did use Russian planes in an advertisement encouraging United States citizens to "support our troops," it should be noted that this image is purposefully generic. It is available via Shutterstock along with the description, "military silhouettes of soldiers and airforce against the backdrop of sunset sky."

A lightened version of these soldier silhouettes also carried a rather nondescript description: "five soldiers of different armies." Another version of the image shows these planes flying in front of a Syrian flag.

Lippman, Daniel and Bryan Bender.   "Trump Ad Asks People to Support the Troops. But it Uses a Picture of Russian Jets."     Politico.   14 September 2020.