The Arkansas Republican has supported drug screening for welfare programs, but never for Social Security. 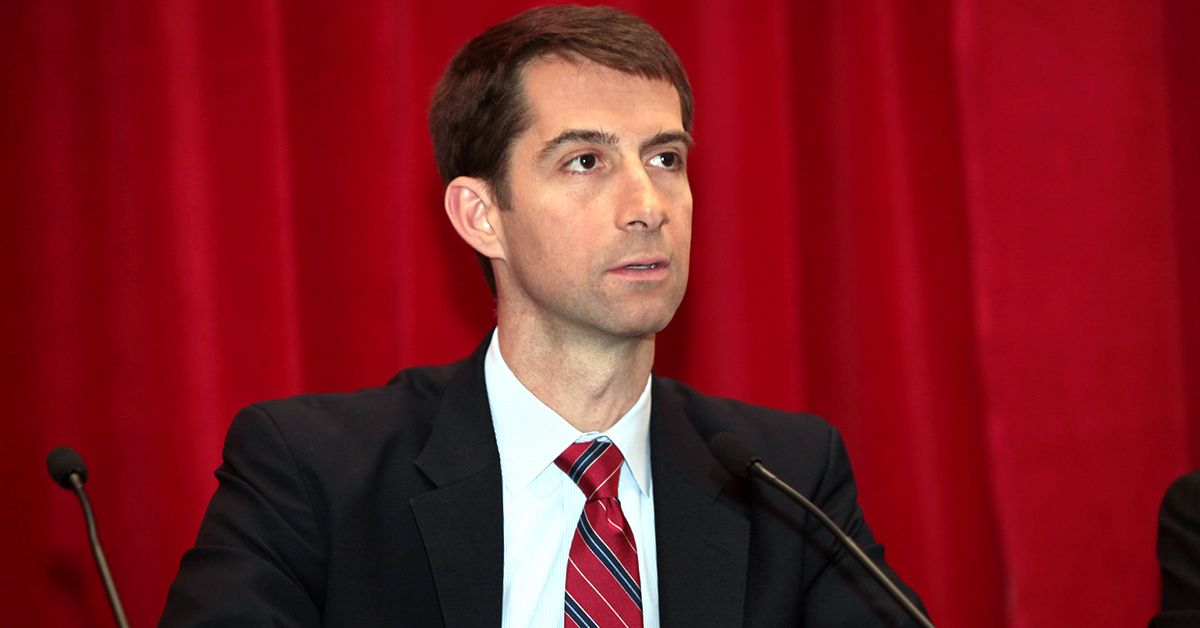 Amid tense talks between Congressional Republicans and Democrats over the 2018 federal budget, the attention of many observers turned to each side's record on government spending, benefits and entitlements, and fiscal priorities.

In that vein, a widely-shared Facebook meme took aim at Republican Senator Tom Cotton of Arkansas, accusing him of supporting a modified version of a long-standing liberal bête noire — drug-testing for welfare recipients.

Tom Cotton calls for every person who receives Social Security to be drug tested those who test positive will lose benefits. This claim is false. We searched Cotton's speeches, op-eds, and press releases, as well as the Congressional Record and news archives, and found no evidence of the Senator ever having advocated such a policy.

In an e-mail, a spokesperson for Cotton told us the meme was "completely false":

Senator Cotton does not support (nor has he ever supported) drug testing for Social Security recipients.

Indeed, even those who call for drug-testing for welfare recipients do not typically propose the same policy for Social Security.

This is because Social Security is more widely regarded as an earned benefit (workers contribute to it through payroll taxes), while programs such as housing assistance or the Supplemental Nutrition Assistance Program (formerly known as food stamps) are regarded as welfare.

Senator Cotton does, however, have a record of making statements and advocating policies around welfare assistance which have raised eyebrows.

It's hard to say what came first or caused the other: population decline or increased disability usage. Or maybe economic stagnation caused both. Regardless, there seems to be — at least at the county and regional level — something like a disability tipping point.

When a county hits a certain level of disability usage, disability becomes a norm. It becomes an acceptable way of life and an alternative source of income to a good-paying, full-time job...After a certain point, when disability keeps climbing and becomes endemic, employers will struggle to find employees, or begin — or continue — to move out of the area.

Population continues to fall, and a downward spiral kicks in, driving once-thriving communities into further decline. Not only that, but once this kind of spiral begins, communities could begin to suffer other social plagues as well, such as heroin or meth addiction and associated crime.


In 2014, while running for the Senate, a Huffington Post writer accused Cotton of "calling food stamp recipients addicts." Again, his comments were much more nuanced than that description.

According to a Huffington Post transcript of a virtual town hall hosted by Cotton in July 2014, the then-Congressman defended voting down a Democratic bill relating to agricultural payments and federal food aid, on the basis that it did not sufficiently reform the food stamps program, including by requiring drug testing for applicants:

I don’t think that we should be using farmers as a way to pack more welfare spending into Barack Obama’s government,” Cotton said. “Nor should we have a food stamp program that isn’t reformed, that doesn’t have job training and work requirements, that doesn’t have drug testing requirements, so we can get people who are addicted the help they need. Or make sure that long-term addicts or recidivists are not abusing taxpayer dollars.”

In March 2017, Cotton joined with Republican Senate colleagues in voting to nullify an Obama-era Department of Labor rule which limited the circumstances under which states could conduct drug-testing for individuals applying for unemployment insurance.