Were Cast and Crew on the Film 'Titanic' Sickened by PCP-Laced Seafood Chowder? 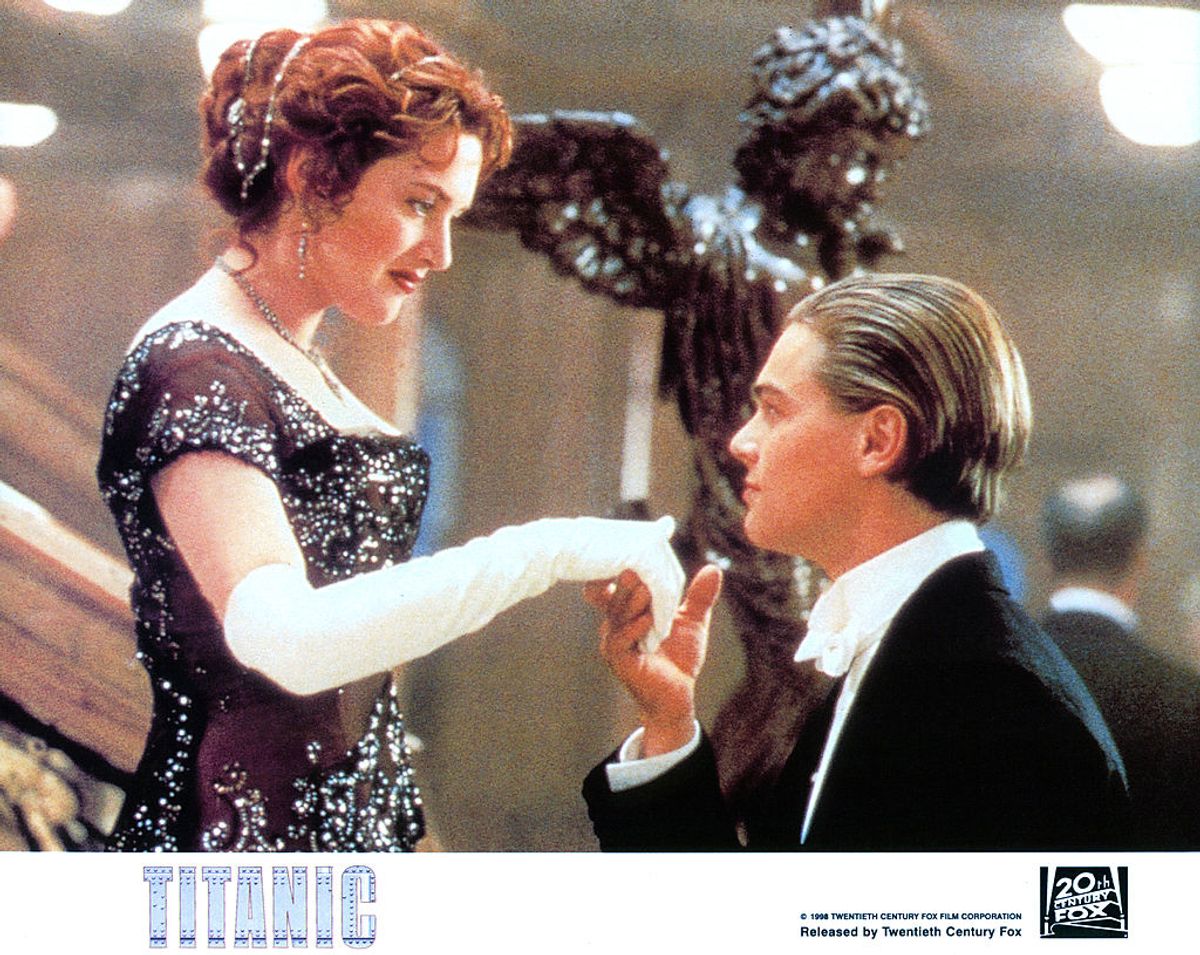 Kate Winslet offers her hand to Leonardo DiCaprio in a scene from the film 'Titanic', 1997. (Photo by 20th Century-Fox/Getty Images)

Claim:
Dozens of people on the set of the film "Titanic" were sickened after eating seafood chowder that had been spiked with the drug PCP on the final day of shooting.
Rating:

Dozens of people on the set of "Titanic," including actor Bill Paxton and director James Cameron, were sickened after someone laced the seafood chowder with PCP.

The movie's stars, Leonardo DiCaprio and Kate Winslet, were not on set at the time, and the incident did not occur on the final day of shooting. The Facebook page reads: "On the last night of filming Titanic, someone laced the cast and crew’s food with PCP. 80 cast and crew members, including James Cameron and Bill Paxton, started hallucinating and had to be hospitalized."

This Facebook post recounts a genuine news story from the set of Titanic. However, some of the details are misleading or inaccurate. For instance, this incident occurred during the final day of shooting at one specific location but not the final day overall for the film:

The location was the Halifax area on the Akademik Msislav Keldysh research vessel that Cameron used to film the underwater sequences, a year earlier. Fifty crew members made the trip to Nova Scotia for what was supposed to be a pit stop to the main event. However, on 9 August 1996, three weeks into filming, all hell broke loose when several people fell violently ill after a dinner break.

More importantly, the included image in this Facebook post is misleading, as neither of the movie's stars, Leonardo DiCaprio or Kate Winslet, were on set at the time of the incident.

On 26 August 1996, the Canadian press reported that nearly 80 people were taken to the hospital from the set of Titanic for what was initially thought to be food poisoning. However, the Halifax regional police investigated the incident and found that someone had laced the seafood chowder with PCP:

Though the movie's lead stars were not on set during this incident, other big names attached to the film, such as actor Bill Paxton and director James Cameron, were on set and did eat the PCP-laced chowder.

Paxton was quoted by Entertainment Weekly in 1996 saying that he typically didn't eat the catering on the set but on that night, for whatever reason, he decided to join Cameron for a bowl of the chowder:

Exactly who spiked the chowder remains a mystery — and the source of an ongoing criminal investigation — but for actor Bill Paxton (Twister), who plays a modern-day treasure hunter, it was truly a night to remember. After planning to eat Italian food in his trailer, Paxton opted instead to join Cameron for a bowl of lobster chowder. Within 15 minutes after eating, he recalls, ”the crew was all milling about. Some people were laughing, some people were crying, some people were throwing up.” Assuming that bad shellfish had caused the problem, Paxton jumped in a van headed for Dartmouth General Hospital. ”One minute I felt okay,” he says, ”the next minute I felt so goddamn anxious I wanted to breathe in a paper bag. Cameron was feeling the same way.”

Paxton also recounted the experience during an interview with Larry King:

Several other people who were on set that day have given their own versions of this story. Marilyn McAvoy, who was a standby painter on the set, spoke with Vice in May 2017:

Vice: Hey Marilyn, so tell me, what was that chowder like?
Marilyn McAvoy: The chowder was unbelievable. People were going back for second bowls. I really thought about going back because it was so good. And I think that was part of the problem: People ate a lot more than usual because it was so delicious.

What else do you remember about that night?
There was no indication that there was anything strange happening ... until the meal. By the time we got back from eating, after about 30 minutes, that's when I started noticing something was wrong. Everyone seemed confused. Everyone was having trouble getting their work done.

How did the rest of the crew react?
While I was trying to figure out what was going on, everyone else seemed to be going outside. They were all gathering outside of the giant doors of the building we were working in.

I also heard later on that as soon as James Cameron realized something had been put in the chowder, he ran up to his room and forced himself to throw up.

This incident is also mentioned in a biography of DiCaprio. In it, actor Lewis Abernathy was quoted describing how Cameron allegedly looked after eating the drug-laced chowder:

Actor Lewis Abernathy, who played a cynical sidekick to Bill Paxton's relic hunter, recalled: "There were people just rolling around, completely out of it. Some of them said they were seeing streaks and psychedelics."

"I thought it was food poisoning," he continued (luckily he had eaten in his hotel that night). "Really bad seafood can make you hallucinate and this caterer was big on clams. Jim was being loaded into the back of this van - I was just shocked at the way he looked. One eye was completely red, like the Terminator eye - a pupil, no iris, beet red. The other eye looked like he'd been sniffing glue since he was four."

Cameron confirmed that he had eaten the chowder but said that he avoided a trip to the hospital by forcing himself to throw up the contaminated food.

While police confirmed that numerous people on the movie set were sickened after eating PCP-laced seafood chowder, investigators never found out who was responsible. Some suspected that the culprit was a disgruntled chef, while others believed that a crew member was attempting to get revenge on Cameron, who has a reputation for being a tyrannical director.

As far as we can tell, the person who put drugs in the chowder was never identified and no charges were ever filed over the incident. In 1998, the Calgary Herald published an article entitled "Titanic Mystery: Who Spiked the Chowder?" In it, both Paxton and Cameron expressed their anger (as well as confusion) over the incident, saying that whoever laced the chowder put everyone on set, including elderly people and children, in danger: 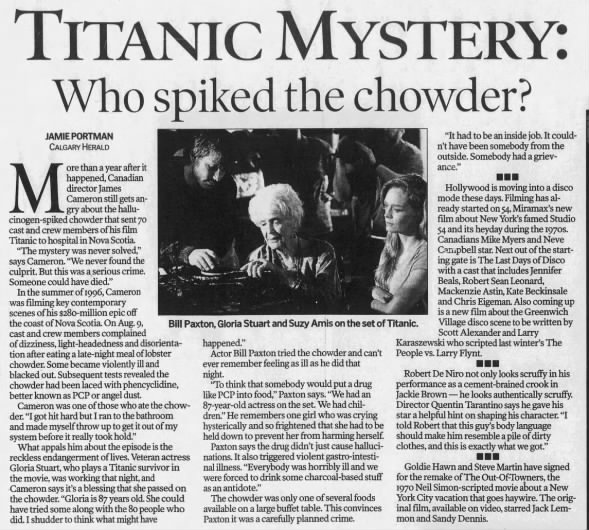 Some disagreement exists over the exact number of people who were sickened or the type of chowder (lobster, clam, or seafood?) that was laced with PCP. However, it is undoubtedly true that dozens of people unknowingly took angel dust on the set of Titanic after an unidentified person spiked the food with it.