Is This Time Magazine Cover About 'Global Cooling'?

Despite all their bluster, climate denial blogs still do not appear to understand the difference between weather and climate. 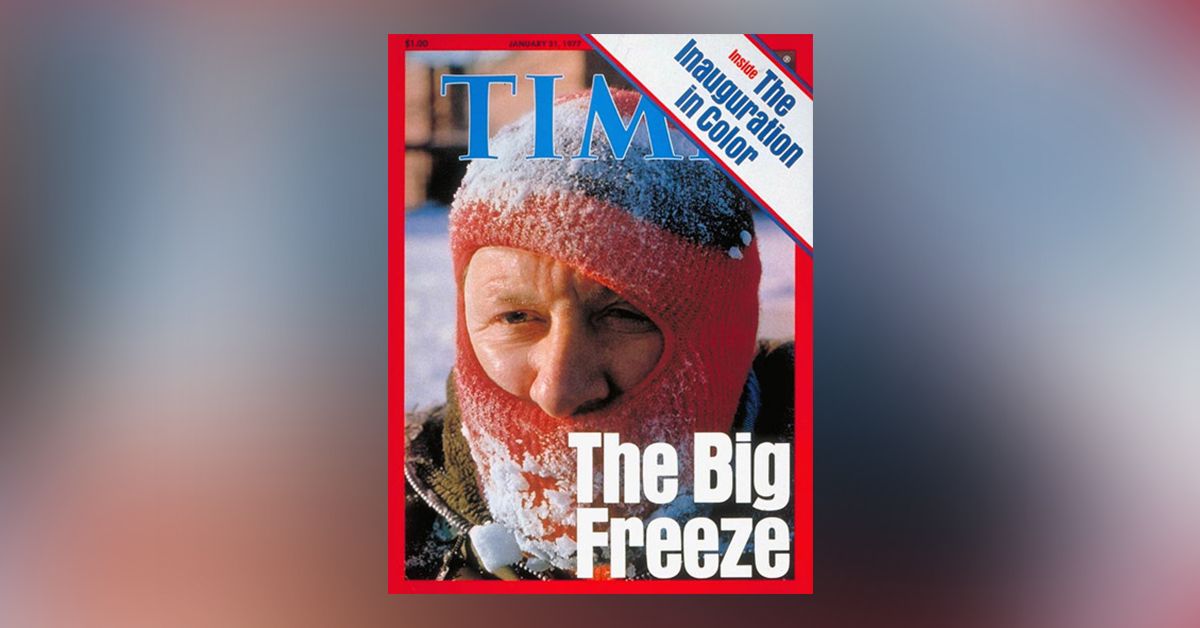 Claim:
A Time magazine cover from 1977 with the title “The Big Freeze” is an example of media fearmongering over “global cooling” in the 1970s.
Rating:

On 30 October 2017, climate change denier blog “Watts Up With That?” (which bills itself as “the world’s most viewed site on global warming and climate change”) published a guest essay by Leo Goldstein. This essay attempted to use a 1977 Time Magazine cover as evidence that Snopes and other news organizations had used a straw man argument in a previous debunker about Time Magazine and so-called Global Cooling.

(Goldstein appears to be under the impression he invented the concept of a straw man argument, and instead calls such a device by his own term “Flooding Fake.” We will use the established nomenclature here). The WUWT post went on to suggest, without evidence, that Time magazine itself wanted to hide the existence of this cover (which is freely available in their online archives) by manufacturing a fake cover for unsuspecting fact-checkers like ourselves to then debunk:

That cover is a seriously inconvenient truth for climate alarmists and their media accessories. So, Time attempted to re-write a history. It published a forged version of its own cover.

…and then easily debunked it as a photoshopped version of its April 2007 cover.  As I will explain below, Time magazine knew it was launching a hoax.  The rest of the liberal media popularized it, although it could have easily recognized it. Snopes adopted it, invented additional details that were not present in the Time article, and angrily condemned “climate deniers.”

It is clear that Goldstein either willfully ignored the contents of the article, or (as other prolific climate deniers proudly brag about) did not read it in the first place. The article, in brief, discussed anomalously cold temperatures during the winter of 1977, and the effect that such temperatures had on a variety of elements of American life, most notably shortages of natural gas:

Still, it is the brutal and unrelenting cold -- the Big Freeze -- that has transformed the inevitable grousing about the weather into personal agony and national hardship.

It was like living in the Arctic—an ominous reminder of how modern man, so proud of his technological mastery of his environment, remains so vulnerable to its whims. Indeed, his very reliance on energy-consuming machines, vehicles and conveniences contributed last week to widespread suffering. To meet soaring energy demands for heating, electrical utilities ordered temporary blackouts in some communities and reduced voltage in others.

A genuine crisis developed in the natural-gas industry. Suppliers put into effect emergency plans, cutting all deliveries to thousands of industrial users. Company officials pleaded for school closings, shortened business hours, and thermostats to be turned down to teeth-chattering levels in private homes.

Weather, which is the short-term scale fluctuation of temperatures, precipitation and other environmental factors that might describe a singularly cold winter in 1977, is a wholly different concept than climate, which is concerned with long-term averages of weather phenomena, normally referring to time periods no shorter than 30 years.

WUWT does reference media reports from the 1970s that, as we discussed in our fact-check of the other purported Time magazine global cooling cover, did indeed raise concerns about a cooling planet. However those reports did not represent in any way a consensus view from the scientific community, and the author of the most notable iteration of that story (published not in Time but in Newsweek), later admitted the article was high on enthusiasm but low on supporting science:

Here I must admit mea culpa. In retrospect, I was over-enthusiastic in parts of my Newsweek article. Thus, I suggested a connection between the purported global cooling and increases in tornado activity that was unjustified by climate science. I also predicted a forthcoming impact of global cooling on the world’s food production that had scant research to back it.

Because the cover in question is about a wholly unrelated topic to the one WWUT for some reason ascribes to it, we rank the remarkably superficial claim that this cover is about the concept of “global cooling” as false.

Delingpole, James.   “Delingpole: An Impertinent Pup from Snopes Tried to Fact-Check Me on Global Warming. Here’s My Reply”