Theodore Roosevelt on Criticizing the President

A passage attributed to Theodore Roosevelt holds that it is unpatriotic, servile, and morally treasonable to proclaim that there must be no criticism of the President. 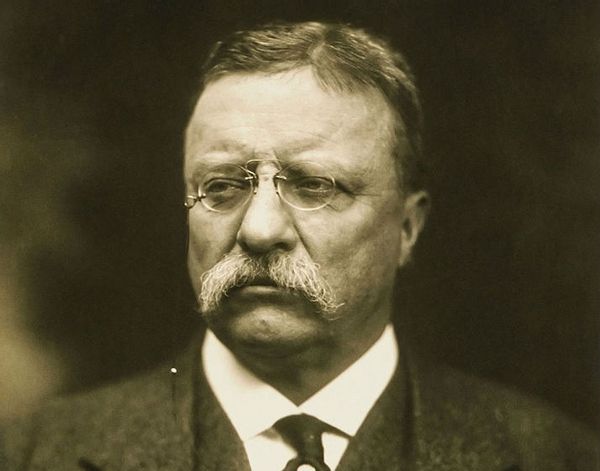 Claim:
Theodore Roosevelt said that speaking out against criticism of the President "is not only unpatriotic and servile, but is morally treasonable to the American public."
Rating:

In March 2003, Iraq was invaded by a U.S.-led coalition of forces mobilized by the George W. Bush administration on the grounds that Saddam Hussein's regime posed an imminent threat to world peace and stability. A large number of Americans remained unpersuaded by President Bush's justification for going to war, however, and thus his decision to do so was criticized before, during, and after the invasion took place.

Reflecting the growing political divide in the country, another segment of the American populace held that it was unpatriotic or even treasonous to speak out against someone who was leading the United States in a time of war. Critics fired back that far from being unpatriotic, it is one's patriotic duty to oppose a president whose policies put Americans in harm's way for no defensible reason. One way they attempted to claim the higher moral ground was by citing a quote attributed to the 26th U.S. President, Theodore Roosevelt:

“To announce that there must be no criticism of the President, or that we are to stand by the President, right or wrong, is not only unpatriotic and servile, but is morally treasonable to the American public.”

The passage is, in fact, from an editorial written by the former president in May 1918, when the U.S. was embroiled in World War I. Make no mistake, Roosevelt wasn't against the war — quite to the contrary, he believed the U.S. had entered it too reluctantly — but he was outspokenly critical of President Woodrow Wilson's conduct of the war, writing no fewer than two syndicated editorials a week over a two-year period advocating for a stronger U.S. presence on the European war front.

Roosevelt's criticisms led to accusations of "disloyalty" on his part, and worse. Ralph Stout, managing editor of The Kansas City Star, took note of the vehemence the attacks on Roosevelt:

Colonel Roosevelt's criticisms of the Administration were not widely popular. The Star never had any idea they would be popular, but it believed they were right and for the real good of the country. As he had foreseen when the connection was made, "Many of your subscribers will be perfectly furious at The Star for printing my editorials." They were. They wrote to The Star to denounce the Colonel for writing the articles and The Star for printing them. In popular discussion in the Middle West forms of disapproval ranged from "He should stand by the President" to "He should be stood before a stone wall and shot."

It was comments like these, exacerbated by suggestions from elements within the Wilson administration that Roosevelt's views ought somehow to be suppressed, that prompted him to craft this high-minded rebuttal:

The President is merely the most important among a large number of public servants. He should be supported or opposed exactly to the degree which is warranted by his good conduct or bad conduct, his efficiency or inefficiency in rendering loyal, able, and disinterested service to the Nation as a whole. Therefore it is absolutely necessary that there should be full liberty to tell the truth about his acts, and this means that it is exactly necessary to blame him when he does wrong as to praise him when he does right. Any other attitude in an American citizen is both base and servile. To announce that there must be no criticism of the President, or that we are to stand by the President, right or wrong, is not only unpatriotic and servile, but is morally treasonable to the American public. Nothing but the truth should be spoken about him or any one else. But it is even more important to tell the truth, pleasant or unpleasant, about him than about any one else.

Nearly 100 years after this, the passage was used to defend critics not only of President George W. Bush, but of President Barack Obama and President-elect Donald Trump, as well.