While a number of media outlets reported on some briefly-lived scientific fears over global cooling in the 1970s, viral images purporting to show a cover story on the topic are doctored. 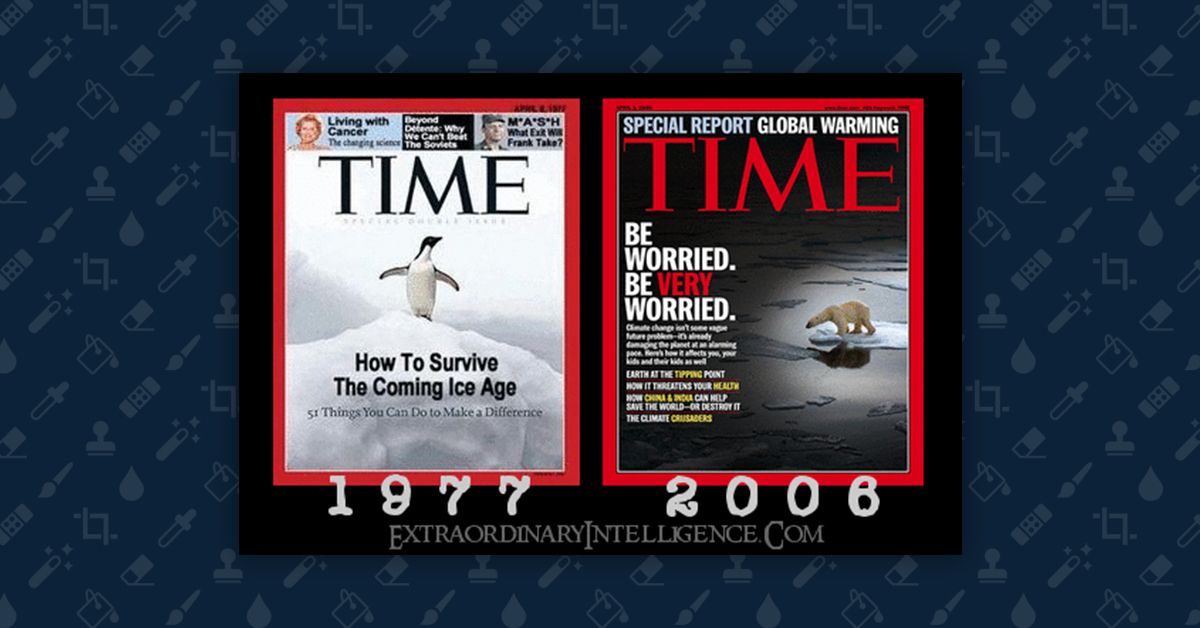 Claim:
'Time' ran a cover story titled "How to Survive the Coming Ice Age" in 1977.
Rating:

A rhetorical technique commonly employed by anthropogenic climate change deniers to diminish climate science is to reference fears some scientists had over the prospect of global cooling in the 1970s. One example of this approach comes from Wyoming Senator John Barrasso, who in a March 2011 hearing with former Environmental Protection Agency director Lisa Jackson stated:

This "flip-flop" is often gleefully documented in meme form and shared on climate skeptic websites. One commonly shared pairing, floating around the internet since at least 2013, purports to show two covers of Time Magazine: A 1977 issue with the cover story "How to Survive the Coming Ice Age" and a 2006 "Special Report" on global warming with the teaser "Be Worried. Be Very Worried":

As noted by Time itself in 2013, the 2006 image on the right is an authentic cover, but the 1977 image is a doctored version of an 9 April 2007 issue which actually featured an article titled “The Global Warming Survival Guide”: The notion that some scientists believed that global cooling could be a serious issue in the 1970s, or that outlets like Time covered the views of those scientists, are not without basis, however. While Time did report run a 24 June 1974 story titled "Another Ice Age?", the most notable and by far the most sensationalized version was a 28 April 1975 Newsweek story written by Peter Gwynne, bearing the title "The Cooling World":

The central fact is that after three quarters of a century of extraordinarily mild conditions, the earth’s climate seems to be cooling down. Meteorologists disagree about the cause and extent of the cooling trend [...] but they are almost unanimous in the view that the trend will reduce agricultural productivity for the next century. [...]

Climatologists are pessimistic that political leaders will take any positive action to compensate for the climatic change, or even to allay its effects. They concede that some of the more spectacular solutions proposed, such as melting the arctic ice cap by covering it with black soot or diverting arctic rivers, might create problems far greater than those they solve.

This article, and much of the media coverage in its vein, overstated the level of scientific concern regarding on global cooling and its effects from that time period, a point graciously conceded by the author of the 1975 Newsweek article in a 2014 story he wrote for Inside Science:

Here I must admit mea culpa. In retrospect, I was over-enthusiastic in parts of my Newsweek article. Thus, I suggested a connection between the purported global cooling and increases in tornado activity that was unjustified by climate science. I also predicted a forthcoming impact of global cooling on the world's food production that had scant research to back it.

While the media did play a role in giving voice to fears about global cooling, we rank the meme as false, because this cover image was digitally manipulated and because no story with its purported title was ever actually published in Time, or anywhere else.