We compiled a comparison chart for various brands of margarine as they were then formulated. 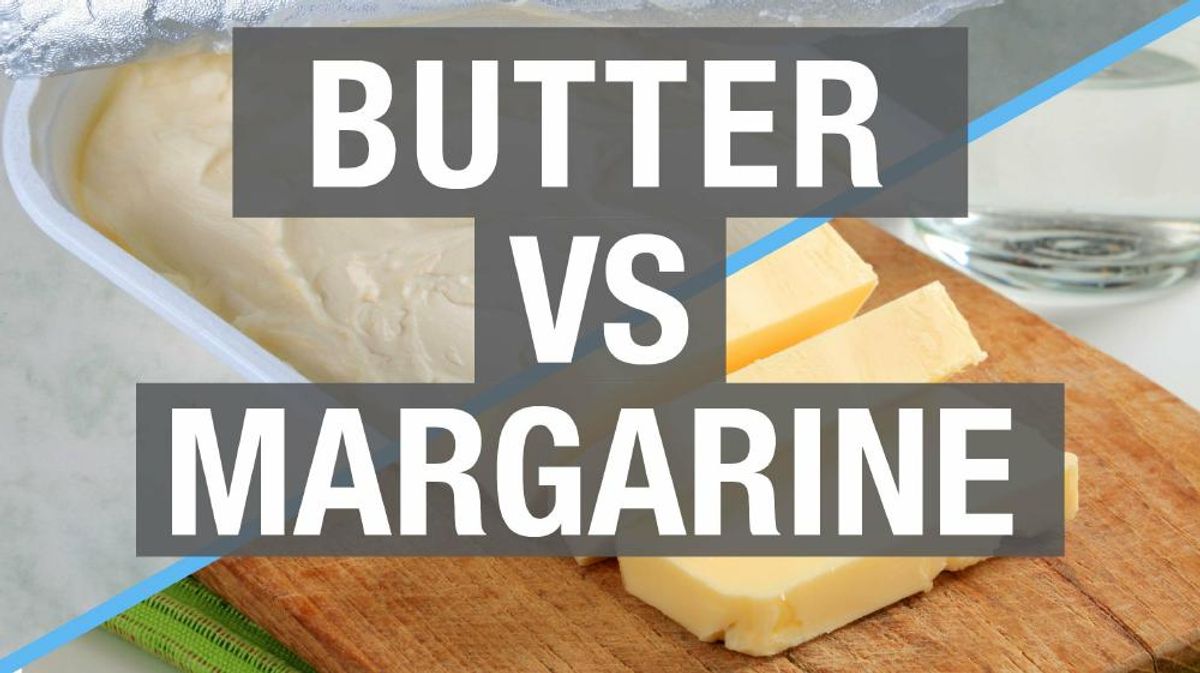 A compilation health piece about the health-related differences between butter and margarine began circulating on the Internet in June 2003, often under the title "Butter vs. Margarine":

The difference between butter and margarine?

Both have the same amount of calories, butter is slightly higher in saturated fats at 8 grams compared to 5 grams. Eating margarine can increase heart disease in women by 53% over eating the same amount of butter according to a recent Harvard Medical Study.

Now for Margarine, very high in trans fatty acids triple risk of Coronary Heart Disease, Increases total and LDL ( This is the bad Cholesterol), Lowers HDL cholesterol and this is the good one, Increases the risk of cancers by up to five fold, lowers quality of breast milk, decreases immune response, and decreases insulin response.

And here is the most disturbing fact......

Margarine is but one molecule from being PLASTIC..... (This fact alone was enough to have me avoiding margarine for life and anything else that is hydrogenated, this means hydrogen is added changing the molecular structure of the food.)

You can try this for yourself, purchase a tub of margarine and leave it in your garage or shaded area, within a couple of days you will note a couple of things, no flies, not even those pesky fruit flies will go near it, (that should tell you something) it does not rot, smell differently... Because it has no nutritional value, nothing will grow on it, even those teeny weeny microorganisms will not find a home to grow... Why?

Because it is nearly plastic. Would you melt your Tupperware and spread that on your toast?

Eventually, the primary focus of the "Butter vs. margarine" piece became the following preface that was later tacked onto it:

Margarine was originally manufactured to fatten turkeys. When it killed the turkeys, the people who had put all the money into the research wanted a payback so they put their heads together to figure out what to do with this product to get their money back. It was a white substance with no food appeal so they added the yellow coloring and sold it to people to use in place of butter. How do you like it? They have come out with some clever new flavorings.

Contrary to the claim, margarine was not invented as a turkey fattener. It was formulated in 1869 by Hippolyte Mège Mouriès of France in response to Napoleon III's offering of a prize to whoever could succeed at producing a viable low-cost substitute for butter. Mège Mouriès' concoction, which he dubbed oleomargarine, was achieved by adding salty water, milk, and margaric acid to softened beef fat. By the turn of the century, the beef fat in the original recipe had been replaced by vegetable oils.

Nonetheless, there was a fair bit of truth to the health issues the piece surveyed, at least at the time it was first circulated. According to the latest findings in the medical world in 2003, margarine could increase the risk of heart disease, depending upon the type of fat contained in the spread. Previously, the dietary villain in the development of coronary disease was presumed to be saturated fat, but newer evidence pointed the finger at trans fat (also known as trans fatty acids). Although butter has its own set of dietary shortcomings, it does not contain trans fat.

In 1994, Harvard University researchers reported that people who ate partially hydrogenated oils, which are high in trans fats, had nearly twice the risk of heart attacks as those who consumed much less of the substance. Several large studies in the United States and elsewhere, including the Nurses' Health Study conducted by researchers at the Harvard School of Public Health, have also suggested a strong link between earlier death and consumption of foods high in trans fat.

Trans fats occur naturally in small amounts in some foods, including meat and dairy products, but most trans fats in the American diet are formed when vegetable oils are chemically changed to give them a longer shelf life. Cookies, potato chips, baked products, and the like are particularly loaded with trans fats.

The Food and Drug Administration, the National Academy, the National Heart, Lung, and Blood Institute, and the American Heart Association all recommend consumers limit their intake of trans fat wherever possible. Moreover, the federal government passed regulations requiring that by 2006 all food labels disclose how much trans fat a product contains.

Back in 2003 we compiled the following comparison chart for various brands of margarine as they were then formulated. Numbers given in grams refer to how many grams of each particular type of fat there are per tablespoon of that brand. (A tablespoon of butter or margarine contains 14 grams.) Numbers given as percentages represent the impact of one tablespoon of that spread on the recommended daily allowance of that substance. Margarines sampled were of the "tub" variety. (The same margarines in "stick" form had consistently higher numbers.)

Because butter is an animal product, it contains cholesterol, amounting to 30 mg per tablespoon or 10% of the USDA recommended daily allowance. Margarines, because they are non-animal products, do not. The preceding chart says nothing about which margarines contained trans fats (or, if they did, how much) because this information was not always included on product labels back then.

Since the issuance of warnings and regulations about trans fats in the last few years, many margarine producers have reformulated their products. I Can't Believe It's Not Butter, for example, now (in 2006) bears a notice on its label proclaiming "NO TRANS FAT," and the amount of polyunsaturated and monounsaturated fat per serving has dropped from 4.5g each to 4g (polyunsaturated) and 2g (monounsaturated) per serving.

Although a great deal of the information given in the piece is valid, one bit of intelligence is nothing more than hyperbole tossed in by the author in an effort to make his point more strongly. The claim that some comestible is but a "single molecule away" from being a decidedly inedible (or even toxic) substance has been applied to a variety of processed foods:

I was told that the difference between Cool Whip and Styrofoam is one molecule. Is this true?

I heard that Pam spray is 1 molecule away from plastic and is therefore dangerous?

I am tired of hearing my husband say that Cheez Whiz is only 2 ingredients different from garbage bags. Can you please help me set him straight?

These types of statements (even if they were true) are essentially meaningless. Many disparate substances share similar chemical properties, but even the slightest variation in molecular structure can make a world of difference in the qualities of those substances. (One would hardly argue that hydrogen peroxide is perfectly drinkable because the only difference between it and water is one oxygen atom.)

In 1886, New York and New Jersey prohibited the manufacture and sale of yellow-colored margarine, and by 1902, 32 U.S. states had enacted such prohibitions against the coloration of the spread. (Folks got around this by mixing yellow food coloring into the white margarine.) In 1950 President Truman repealed the requirement that margarine be offered for sale only in uncolored state, which led to the widespread production of the yellow margarine that has come to be the norm.