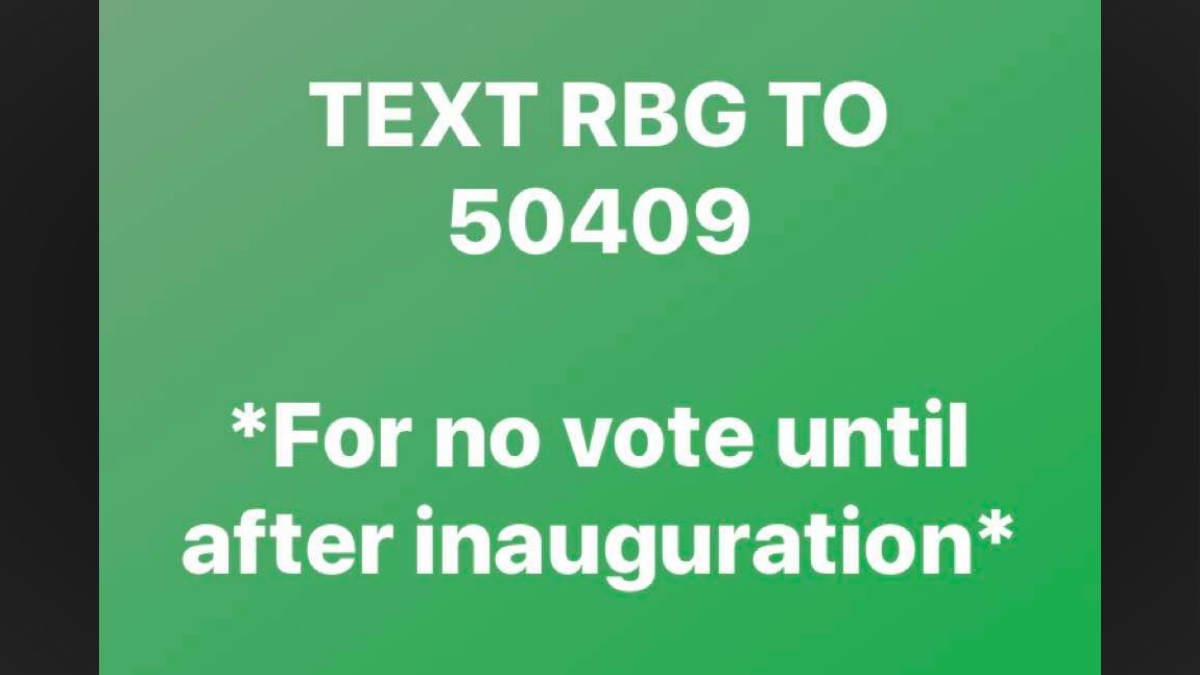 Claim:
Texting "RBG" to 50409 engages a service called "Resistbot" and generates an email encouraging a delayed vote on a new Supreme Court justice, which is sent to a user's U.S. senators.
Rating:

In September 2020, following the death of U.S. Supreme Court Justice Ruth Bader Ginsburg, readers asked Snopes to examine the accuracy and authenticity of social media posts that claimed members of the public could petition their U.S. senators to refrain from appointing Ginsburg's successor until after the November presidential election, by simply texting her initials, RBG, to the number 50409.

A typical message, on Facebook and Twitter, read: "If you want the Senate to delay a new Supreme Court nomination until after the election, Text RBG TO 50409. It’s a bot that will send a signed letter to your senator ..."

Those messages were accurate and described a real automated service run by Resistbot, a product of a Delaware-registered, non-profit organization called the Resistbot Action Fund. We wrote about Resistbot in greater detail in a previous fact check relating to an earlier campaign to support and fund the U.S. Postal Service.

Snopes tested the service using the SMS utility on a cellphone in August 2020, and again on Sep. 21, 2020. It worked smoothly on both occasions. The creators of “Resistbot” state that the same process works on Apple’s iMessage, Facebook’s Messenger, Twitter, and the encrypted text message app Telegram.

First-time users are required to enter their mailing address, so that the bot can work out their congressional district and state, and to verify their identity using email verification. (Repeat users are not required to provide or verify their address and identity).

From there, Resistbot automatically adds the user's signature to an online petition and automatically generates a boilerplate email, on the user's behalf, and sends it to the relevant federal lawmakers. In the case of the "RBG" campaign in September 2020, the letter reads: In the case of the Supreme Court nomination campaign in the autumn of 2020, the email is sent only to each user's two U.S. senators.

Resistbot is a real automated political advocacy service run by a registered non-profit organization. The "RBG" campaign was an authentic piece of political activism, not a scam, and social media posts promoting it were accurate.