Does the Texas DPS Have Armed Patrol Boats on the Rio Grande?

Some social media users were surprised to learn the lengths to which Texas officials have gone to address crime along the mighty river. 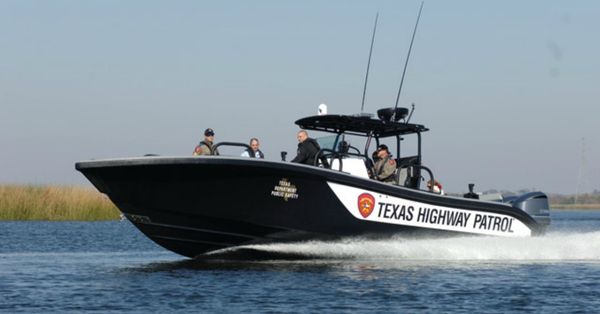 Claim:
A photograph shows a Texas Dept. of Public Safety boat equipped with machine guns on the Rio Grande.
Rating:

In January 2019, a photograph purportedly showing a Texas Highway Patrol boat armed with machine guns on the Rio Grande started circulating on Facebook, along with a message detailing the craft and their use:

For those of you who haven't seen these boats, the State of Texas has 6 of them, all 900 horsepower speed boats armed with 50 caliber machine guns, and armored. They had to be purchased to protect Texas law enforcement along the Rio Grande from armed attackers on the Mexican side. Don't listen to the liars who say we don't have a problem on the border, or that it is not dangerous there. The Texas Department of Public Safety (DPS) unveiled their first patrol vessel in December 2011, and over the next year they added another five boats to their fleet, each of which was named after a Texas police officer who was killed in the line of duty.

A November 2012 press release issued by DPS after the unveiling of the final patrol boat explained the naming process:

The Texas Department of Public Safety (DPS) today commissioned the Tactical Marine Unit’s sixth and final new patrol vessel at a ceremony in Austin. The boat is named in honor of the late Trooper Scott Burns, who was shot and killed in the line of duty at the age of 39 in Marion County on April 29, 2008.

“This is an historic day for the state of Texas, as the Scott Burns completes a fleet of six state-of-the-art patrol vessels that represent a significant enhancement in department’s ability to deter and disrupt illegal activity along the Texas coast and the Rio Grande River,” said DPS Director Steven McCraw. “Trooper Burns was an avid outdoorsman and loved his job as a DPS trooper. His legacy will live on as the boat named in his honor will join the fight against criminal elements in the state of Texas along the coast and border. It is a fitting tribute to this brave young man who gave his life protecting the people of Texas.”

We've reached out to the Texas Department of Public Safety for some updated information on this fleet.

Although the Facebook post states that these patrol vessels were originally purchased to "protect Texas law enforcement" from "armed attackers on the Mexican side," Vinger said that the main purpose of these boats was to stop "smugglers of drugs, weapons and illegal immigrants." According to Vinger, the best use for these patrol vessels was to help law enforcement better respond to "splash downs," a term used to describe the tactic employed by smugglers to escape back to Mexico when confronted by officers on American soil:

Vinger said the best use of the boats would be to deal with what border lawmen call ‘splash downs.’ When drug smugglers are confronted with law enforcement officers in Texas, they currently can speed back to the Rio Grande, drive their vehicle into the river, and then, using rafts, float themselves and their drug cargoes back to Mexico.

“Currently, they have just been allowed to do that,” Vinger said. “Now, with these boats, we will be able to arrest and interdict these smugglers.”

An excerpt from a DPS press release documented by the Houston Chronicle in February 2012 elaborated on the purpose of the vessels:

The Tactical Marine Unit and the patrol vessels represent a significant enhancement of the state’s efforts in combating Mexican drug cartels and other criminal organizations that transport illegal drugs into Texas and varieties of weapons, explosives and munitions out of our state into Mexico. They will be used to impact so-called splashdowns, where drug smugglers crash their vehicles into the Rio Grande River and transport contraband back into Mexico.