"When wireless is perfectly applied, the whole earth will be converted into a huge brain," the iconoclastic thinker supposedly said in a 1926 interview. 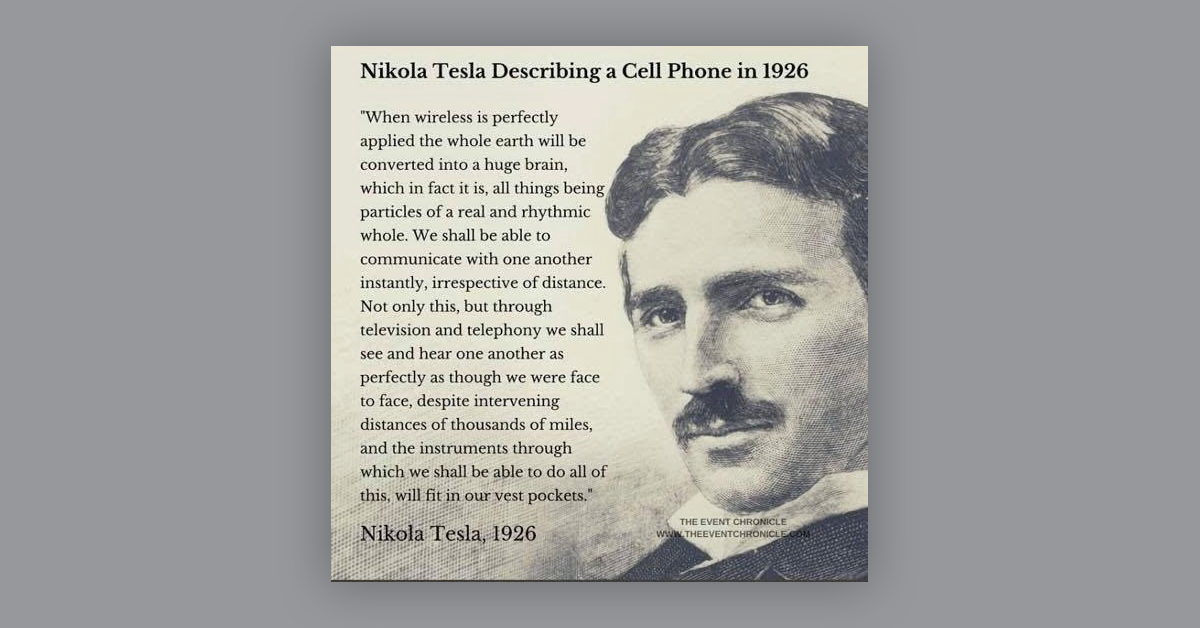 Claim:
In 1926, scientist and inventor Nikola Tesla described a future "when wireless is perfectly applied the whole earth" in a way that allows humans "to communicate with one another instantly irrespective of distance" with the clarity of a face-to-face meeting using a device that "will fit in our vest pockets."
Rating:

A popular quote attributed to scientist Nikola Tesla describes a vest-pocket sized device built on a global wireless system. This putative statement of Tesla's has been memed on numerous occasions because it sounds a like a prescient description of modern smartphones, despite the fact that Tesla allegedly said it in 1926: This quote is correctly attributed to Tesla and to the year 1926. The statement was taken from an interview with Tesla conducted by journalist John B. Kennedy and published in a Jan. 30, 1926, article in Collier's magazine. The article highlighted several predictions of Tesla's, teasing readers with this lede:

A NEW sex order is coming -- with the female as superior. You will communicate instantly by simple vest-pocket equipment. Aircraft will travel the skies, unmanned, driven and guided by radio. Enormous power will be transmitted great distances without wires. Earthquakes will become more and more frequent. Temperate zones will turn frigid or torrid. And some of these awe-inspiring developments, says Tesla, are not so very far off.

The quote describing the "vest-pocket equipment" follows a few paragraphs below (emphasis ours):

"From the inception of the wireless system," [Tesla] says, "I saw that this new art of applied electricity would be of greater benefit to the human race than any other scientific discovery, for it virtually eliminates distance. The majority of the ills from which humanity suffers are due to the immense extent of the terrestrial globe and the inability of individuals and nations to come into close contact.

"Wireless will achieve the closer contact through transmission of intelligence, transport of our bodies and materials and conveyance of energy.

"When wireless is perfectly applied the whole earth will be converted into a huge brain, which in fact it is, all things being particles of a real and rhythmic whole. We shall be able to communicate with one another instantly, irrespective of distance. Not only this, but through television and telephony we shall see and hear one another as perfectly as though we were face to face, despite intervening distances of thousands of miles; and the instruments through which we shall be able to do his will be amazingly simple compared with our present telephone. A man will be able to carry one in his vest pocket.

"We shall be able to witness and hear events -- the inauguration of a President, the playing of a world series game, the havoc of an earthquake or the terror of a battle -- just as though we were present.

In concept, Tesla's words were an apt description of the 21st century smartphone: a device that allows the real-time transmission of audio and video between individuals regardless of the distance between them, yet is small enough to comfortably fit in a pocket. Because Tesla did indeed make these statements back in 1926, the quote is accurately attributed to him.