Were Tennessee Schoolchildren Forced to Bow Down to Allah?

A photograph of children kneeling has been attributed to many locations and does not capture Tennessee public school students being forced to pray in a mosque. 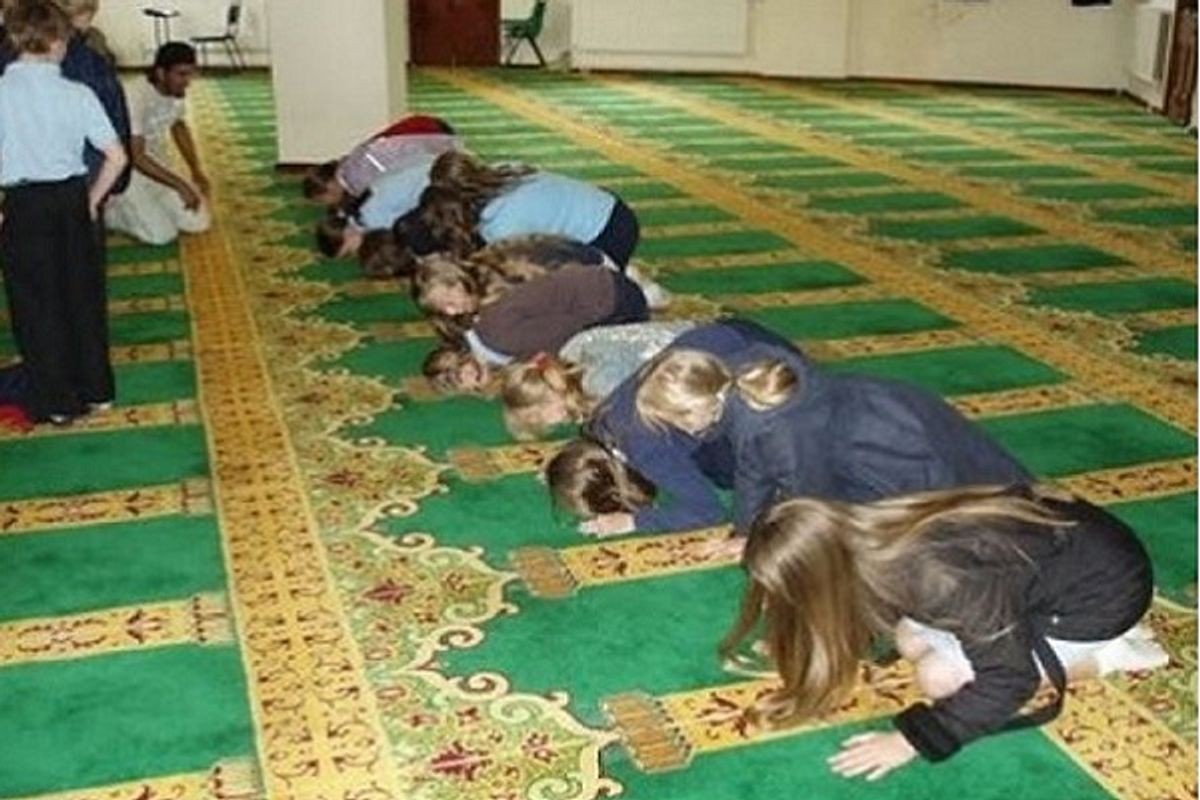 Claim:
A photograph shows Tennessee public school students being forced to pray in a mosque.
Rating:

On 23 August 2016, the web site Christian Today reported that public school students in Tennessee were being forced to "bow down to Allah":

Middle school parents in Tennessee are up in arms upon learning that their children were being forced to recite and write the Islamic Shahada conversion creed: “Allah is the only god and Muhammad is his prophet,” as part of an alleged ‘world history’ project.

That short item was accompanied by a misleading photograph that was taken neither recently nor in Tennessee, showing children kneeling at a mosque in the posture assumed by Muslims during prayer. That picture seems to have first appeared online in 2011, shared by anti-Muslim web sites in Europe that claimed it was taken in either England or Denmark.

The photograph was later shared by white supremacist and anti-Muslim web sites in the United States that claimed it was taken in Alabama, Florida, and even Glasgow, Scotland. Some web sites claim the image proves that President Barack Obama is secretly trying to force Americans to convert to Islam:

Now that Obama is in his last days of presidency, it’s quite clear that he is moving to establish his “master plan.” This isn’t the first time we have heard about it. The closer we get to election day, the more it becomes clear just how true it is.

The earliest appearance of the photograph in question that we could find dates from late 2011, when the picture was published by web sites such as Islam versus Europe and EuroIslam. Both sites stated the photograph was taken in England, but didn't say where or otherwise source the image — but you get a flavoring of the sentiment involved by this quote from the text from the Islam versus Europe page:

Here's a photo from something similar in England. Note the evil-looking Muslim dressed in white. He seems to be enjoying himself as the little blonde white girls bow down in front of him.

Another web site, Bare Naked Islam, claimed the picture was taken in Denmark, yet the same web site claimed in a different post that it came from Alabama, and published it again in 2015 to accompany a blog post entitled, "All about the Barack Hussein Obama Muslim connection to Common Core."

As the image worked its way across the Atlantic Ocean, yet another a blog claimed in 2013 the image originated with Volusia County, Florida.

The photograph, which seems to have come from somewhere in Europe around 2011, found new life in the summer of 2016 with the web site Conservative Daily Post claiming the photograph showed "Kids Engaging in Obama’s New 'Cultural Immersion' School Program." The white supremacist web site, The Daily Stormer, used the image in a July 2016 in a post condemning "multiculturalism."

Public schools in the United States typically teach major world religions as an element of history or social studies classes, and when students reach the point in the curriculum in which they learn about the Islamic faith, those lessons occasionally trigger claims by some parents that their children are being indoctrinated into Islam and "forced to say Muslim prayers."

Sara Gast, spokeswoman Tennessee's state Department of Education, told us that none of the state's public school students are being forced to pray or adhere to any religion:

No Tennessee student is being forced to pray to any god. Earlier this year (2016, the Tennessee General Assembly passed a bill to require that any inclusion of religion in textbooks, instructional materials, curriculum, or academic standards be for educational purposes only and not be used to proselytize or establish any religion or religious belief. Additionally, each district is required to adopt a policy regarding the appropriate inclusion of religion in local curriculum and instructional materials.

Tennessee has long had academic standards for social studies that include world history being taught at various points over the course of a student's K-12 schooling: grade 6, grade 7, and high school. Major religions, including Christianity, Judaism, Buddhism, Hinduism, Confucianism, Islam, and Shinto, are covered throughout those courses. The intent of the standards is to help students develop a larger context around world religions and world cultures and see how those impact world history.

Nevertheless it is worth noting that Islam, along with Christianity and Judaism, share the Biblical figure Abraham as their common ancestor, and all three worship the same conception of a monotheistic god. "Allah" is the Arabic word for "God."