Did Ted Cruz Tweet ‘I’ll Believe in Climate Change When Texas Freezes Over'?

The senator is under fire for traveling to Cancún, Mexico, as a winter storm shut down power across his state. 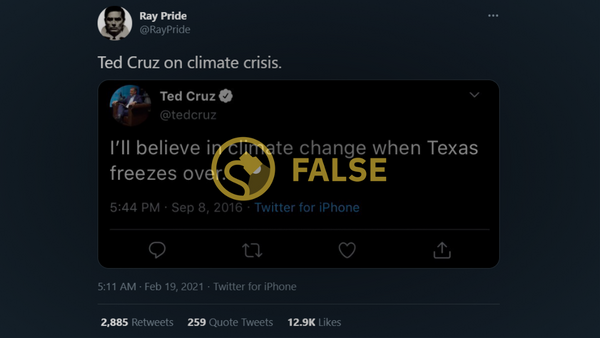 Sen. Ted Cruz is under fire for taking a flight to the resort town of Cancún, Mexico, on Feb. 17, 2021, as his home state of Texas underwent severe winter storms. Cruz returned the next day, saying the trip was “obviously a mistake.” Meanwhile, hundreds of thousands of people lost access to heat and electricity, and millions were forced to boil their own tap water before drinking it because of damaged infrastructure.

As a result, a screenshot of a tweet claiming to be from his Twitter account began circulating on the internet, in which Cruz allegedly said, “I’ll believe in climate change when Texas freezes over.” The tweet appeared to be from Sept. 8, 2016. We looked through Cruz’ Twitter history, and there is no record of him having tweeted this, even in archived versions of his page from Sept. 2016. A look at ProPublica's deleted tweets archive also showed no results from that date. He was also never quoted saying this publicly based on online searches.

Other memes emerged quoting Cruz, without attributing the tweets as well. This particular meme said “Satire” on the bottom right. The exact origin of the quote is unclear, but we found the same quote on a website called Tjshome.com on a page stating, “Funny Status Messages and Tweets.” This particular quote was added to the list on Feb. 18, 2021, in the midst of the power crisis in Texas. Others on the page appeared to be one-line jokes.

Given that the quote was not tweeted from Ted Cruz’ account, and there is no record of him saying this, we rate this claim as “False.”