As the world's first and only fact-checking organization named after Faulkner characters, we were shocked to hear demands that a soliloquy from "Macbeth" be attributed to the American author. 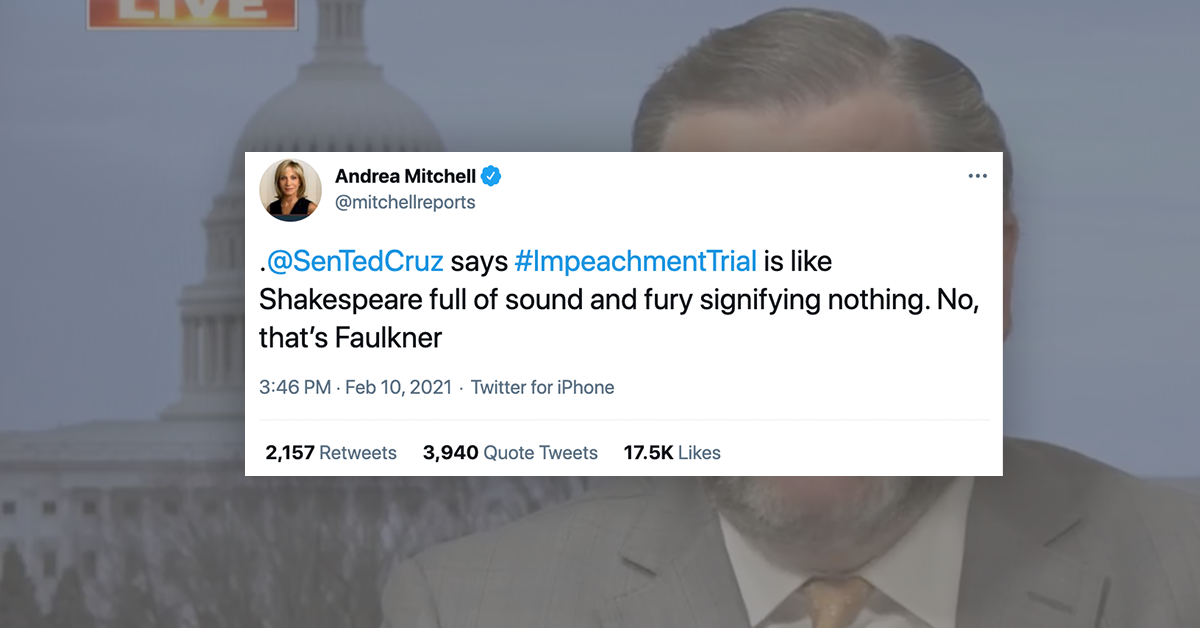 Claim:
U.S. Sen. Ted Cruz messed up when he attributed the famous phrase "full of sound and fury / signifying nothing" to William Shakespeare.
Rating:

During an appearance for Fox News' show "America's Newsroom" on Feb. 10, 2021, U.S. Sen. Ted Cruz invoked the Bard to summarize his views on the second impeachment trial of former U.S. President Donald Trump. The proceedings, he said, were "reminiscent of Shakespeare [in] that it is full of sound and fury, and yet signifying nothing." In response to the segment, MSNBC's Andrea Mitchell tweeted that Cruz misattributed the quote. "No," she tweeted, "that's Faulkner," referring to American novelist William Faulkner.

As the world's first and only fact-checking organization named after a Faulkner reference, this attempt at a correction puzzled us.

As many have pointed out and as Mitchell later conceded, Cruz was correct. One of the most famous soliloquies written by Shakespeare (or, perhaps, ever), the full passage comes from the fifth act of "Macbeth" and is spoken by the titular character:

Creeps in this petty pace from day to day,

To the last syllable of recorded time;

And all our yesterdays have lighted fools

The way to dusty death.

Out, out, brief candle!

Life is but a walking shadow, a poor player

That struts and frets his hour upon the stage

And then is heard no more. It is a tale

Told by an idiot, full of sound and fury

Several other literary works have referenced the passage. Indeed, the title of the 1929 William Faulkner novel "The Sound and the Fury" is an allusion to the Shakespeare soliloquy — a potential point of confusion for Mitchell. Mitchell later apologized to Cruz, saying "I clearly studied too much American literature and not enough Macbeth."

Because Shakespeare is the OG when it comes to using the words sound and fury, Cruz did not botch this reference, and the claim that he did is "False."