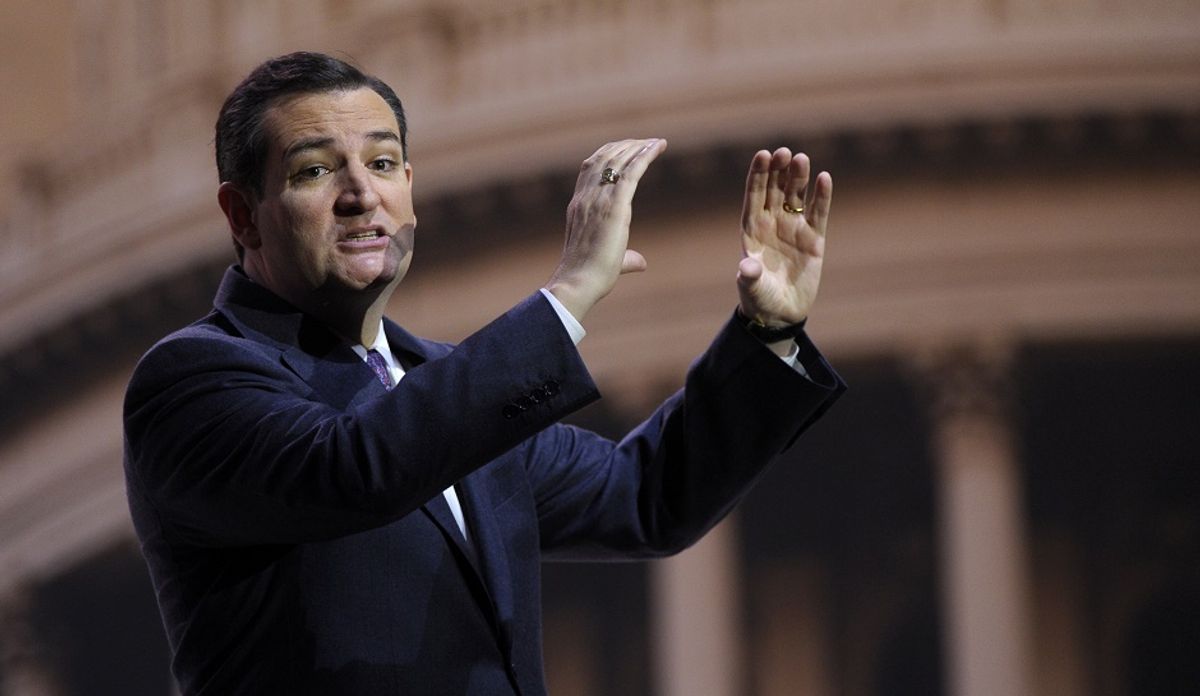 It's true that while Ted Cruz was serving as solicitor general of Texas, his office defended an existing law banning the sale of "obscene devices."

In 2004, retailers wanted to sell such devices mounted a challenge to overturn the law, and in 2008 a three-judge panel of the U.S. District Court of Appeals' Fifth Circuit struck down the Texas law, concluding that it did indeed violate the 14th Amendment to privacy.

The case was actually an important battle concerning privacy and free-speech rights. In 2004, companies that owned Austin stores selling sex toys and a retail distributor of such products challenged a Texas law outlawing the sale and promotion of supposedly obscene devices ... In 2007, Cruz's legal team, working on behalf of then-Attorney General Greg Abbott (who now is the governor), filed a 76-page brief calling on the US Court of Appeals for the 5th Circuit to uphold the lower court's decision and permit the law to stand. The filing noted, "The Texas Penal Code prohibits the advertisement and sale of dildos, artificial vaginas, and other obscene devices" but does not "forbid the private use of such devices." The plaintiffs had argued that this case was similar to Lawrence v. Texas, the landmark 2003 Supreme Court decision that struck down Texas' law against sodomy. But Cruz's office countered that Lawrence "focused on interpersonal relationships and the privacy of the home" and that the law being challenged did not block the "private use of obscene devices." Cruz's legal team asserted that "obscene devices do not implicate any liberty interest." And its brief added that "any alleged right associated with obscene devices" is not "deeply rooted in the Nation's history and traditions." In other words, Texans were free to use sex toys at home, but they did not have the right to buy them.

One of the more popular tidbits to emerge from that article pertained to the assertion that Cruz (via his legal team) had maintained:

It's important to note here that as solicitor general, Ted Cruz was in charge of the office tasked with representing the government's side of cases brought against the State, an office that was obligated to defend the law currently in place (i.e., argue in favor of upholding the state's ban on "obscene devices") as directed by the state's attorney general, Greg Abbott.

The case in question did not create a "ban on the sale of dildoes" (it was a challenge to an existing law to that effect), and the fact that the task of defending the law fell to the solicitor general's office (which was headed by Ted Cruz) does not mean that Ted Cruz personally approved of the law, or that he personally prepared or argued the case defending it. (As shown in court records, the State's side of the case was presented before the United States Court of Appeals by Bill L. Davis, not Ted Cruz.)

It is true that the controversial line quoted above (regarding there being no "right to stimulate one's genitals for non-medical purposes") appears in the Court of Appeals ruling as something referenced by the State (as corroborated here):

To determine the constitutional standard applicable to this claim, we must address what right is at stake. Plaintiffs claim that the right at stake is the individual's substantive due process right to engage in private intimate conduct free from government intrusion. The State proposes a different right for the Plaintiffs: "the right to stimulate one's genitals for non-medical purposes unrelated to procreation or outside of an interpersonal relationship."

However, as noted above, that statement flowed from a much earlier case, Yorko v. State (brought in 1985, long before Ted Cruz served as solicitor general), in which the Texas Court of Criminal Appeals had held that that there was no constitutional right to "stimulate another's genitals with an object designed or marketed as useful primarily for that purpose," as well another case brought in a different state, Williams v. Attorney General of Alabama, regarding a statute prohibiting the sale of "sex toys."

The most that one can make of this issue is to say that Ted Cruz once, in accordance with his job duties and the requirements of his office, oversaw lawyers who were obliged to argue in favor of an existing Texas state law that prohibited the sale of "obscene devices" (which included some sexual aids).