Does the 2017 Tax Plan Eliminate Deduction for Losses from Wildfires, Other Natural Disasters?

Blowback against the proposed elimination of deductions for personal losses caused by natural disasters surged as wildfires ravaged southern California. 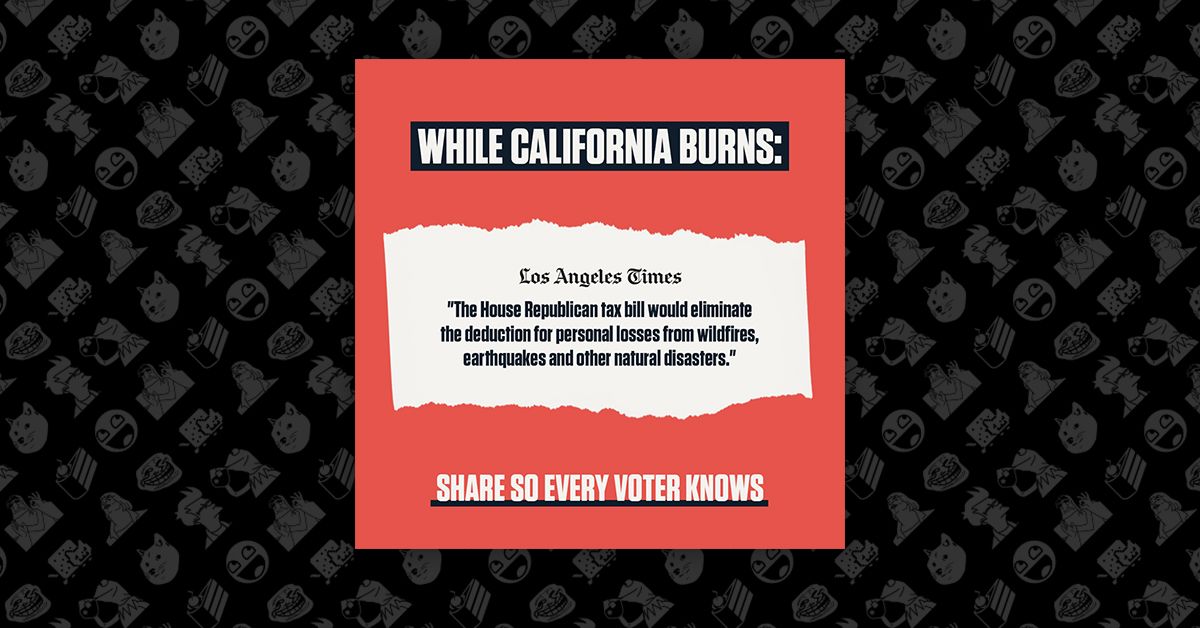 Claim:
The Tax Cuts and Jobs Act of 2017 calls for eliminating or severely curtailing the personal casualty deduction for losses from wildfires and other natural disasters.
Rating:

Provisions in the 2017 tax reform bill that would eliminate or restrict tax deductions for uninsured personal losses in natural disasters came under criticism in early December as devastating wildfires raged out of control in southern California.

One popular social media post made its point by quoting a 7 November article in the Los Angeles Times:

"The House Republican tax bill would eliminate the deduction for personal losses from wildfires, earthquakes and other natural disasters."

But although the quote is real and the Times article confirmed that the deduction was on the chopping block, it also reported that victims of the December 2017 wildfires will still be able to use it if they can assess damages in time:

If the bill becomes law, the deduction would disappear next year, but would be available for victims of the massive wildfires that struck Northern California last month — as long as they can figure out their uninsured losses and include them on their 2017 tax return.

The larger point remained true, however, namely that going forward victims of natural disasters would no longer have this tool — or at best would only have limited use of it — to help recoup casualty losses.

The House and Senate versions of the Tax Cuts and Jobs Act differed slightly in their proposals. While the House version would eliminate the personal casualty deduction entirely, the Senate version would keep it, though limiting its scope to losses incurred in "federally declared disasters," a category rarely applied to wildfires, the Times reported.

Government statistics cited by NBC News illustrate the national impact eliminating the deduction would have on Americans:

Americans deducted $1.6 billion in 2015 for natural disaster losses, according to the IRS. The Treasury Department estimated that taxpayers would deduct $4.83 billion in losses beginning next year through 2027.

Democratic Senators Dianne Feinstein and Kamala Harris, both of California (a state likely to be disproportionately affected by the proposed change), issued a joint statement in November condemning the Republican tax plan:

After the worst fire season in California history, it’s unbelievable that Republicans are considering eliminating the tax deduction for losses suffered during a natural disaster. Asking victims of wildfires or earthquakes to suffer in order to pay for tax cuts for the rich is the height of cruelty.

During the recent [October 2017] wildfires, 43 people were killed and nearly 8,900 buildings destroyed, resulting in billions of dollars in damages. Under the Republican plan, families who lose everything in a similar disaster in the future would be unable to write off those losses.

This is just another example of the extraordinary lengths Republicans will go to cut taxes for wealthy corporations and individuals at the expense of middle-class families. We urge the Senate Finance committee to reject this absurd proposal and not include it in the Senate’s tax reform bill. Americans want a tax code that helps those in need, not just the rich.

Republican Representative Kevin Brady of Texas acknowledged the plight of the California fire victims and promised to provide special tax relief similar to that which he secured for the victims of the 2017 hurricanes.

Yet, he didn't back down from his support of the House tax bill:

I am focused on securing funding for those impacted by this year’s devastating storms and wildfires while also working to wrap up the most transformational tax reform bill in a generation.

It remains to be seen what will become of the personal casualty deduction in the final version of the Tax Cuts and Jobs Act, which, as of this writing, is still undergoing reconciliation in Congress.

It is expected to be passed and signed into law by the end of 2017.