Does This Pic Show a Real Animal Called a 'Carpet Shark'? 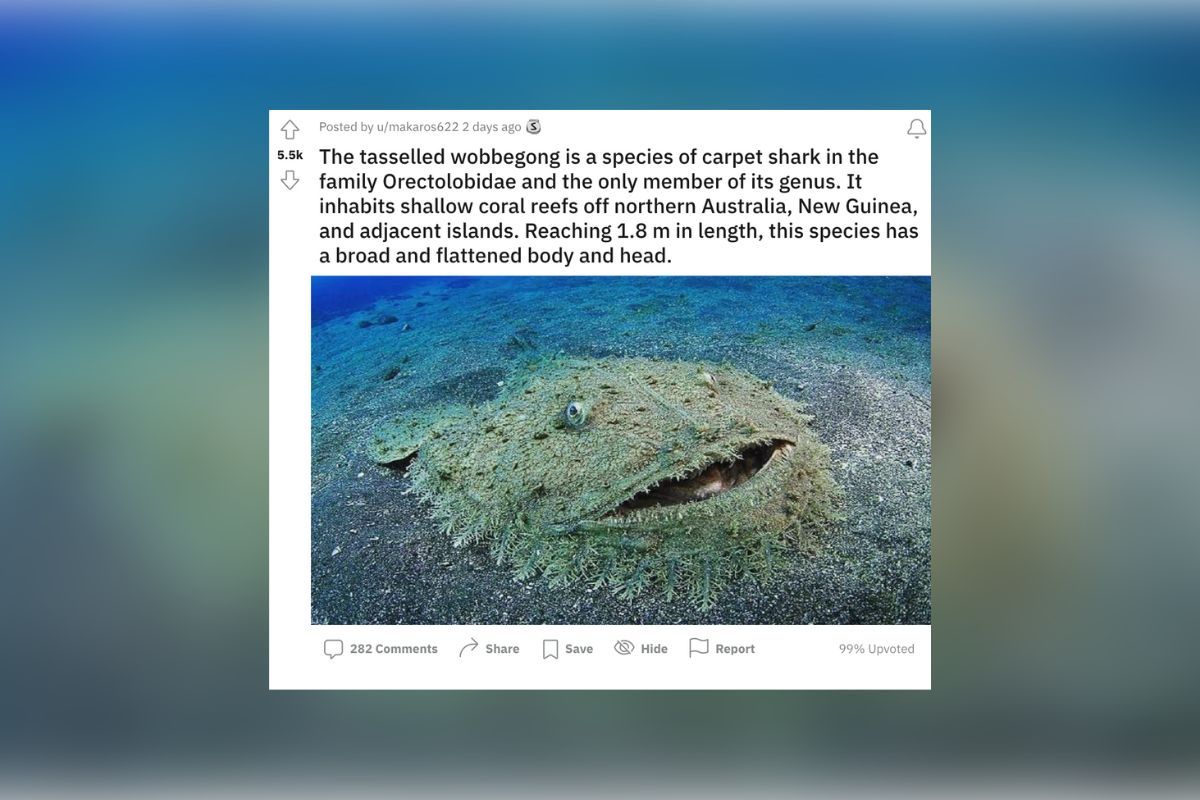 There is no indication that the photograph was digitally edited, and it indeed depicts a real animal. Separately, the tasseled wobbegong, or "carpet shark," is a real species. However ...

The photograph does not show a tasseled wobbegong. Rather, it depicts a goosefish, which is also known as a monkfish or American angler.

A photograph supposedly depicting the so-called “carpet shark,” also known as the tasseled wobbegong, has been shared on social media since at least November 2021. Though there is no evidence of digital editing, it does not genuinely depict a tasseled wobbegong — which is a real species of carpet shark — but rather an entirely different species of fish found along the eastern seaboard of the U.S.

The Snopes newsroom came across the photograph in July 2022 when it was shared to Reddit's r/interestingasfuck subreddit. That post included a caption that framed the image as an underwater snapshot of the tasseled wobbegonging in the "shallow coral reefs off northern Australia, New Guinea, and adjacent islands."

But that caption was misleading. The photograph does not show a tasseled wobbegong. Rather, it depicts a goosefish, which is also known as a monkfish or American angler.

While we were not able to verify the exact origins of the image in question, we do not doubt that the photograph is authentic, based on similar images showing the goosefish.

A quick reverse-image search showed that the photograph has been circulating on social media in various iterations since at least 2021. A compilation of memes claiming that the goosefish pictured is actually a tasseled wobbegong. Screengrabs/Tineye

Since that time, several social media users pointed out that it was erroneous to call the photographed fish a tasseled wobbegong when it was really a goosefish.

Sometimes called a monkfish or American angler, the goosefish (scientific name Lophius americanus) is found in the north and mid-Atlantic. The fish is described by NOAA as having “mottled dark brown to olive-green skin on top and whitish skin underneath.” Some say the goosefish has a “tadpole-like appearance,” characterized by a broad head and large mouth.

Goosefish are ambush predators. Though the seafloor-looking fish typically reach lengths of up to 4 feet, they can disappear into their surroundings and sit in camouflage along the ocean floor. The bottom-dwellers use their modified spines like fishing poles to lure prey — small fish including other goosefish — toward their mouths. In addition to fish, goosefish also eat crustaceans, mollusks, seabirds, and diving ducks, notes NOAA.

While the goosefish finds its home waters along the eastern coast of the U.S., the tasseled wobbegong lives in the waters of northern Australia and is a member of the carpet shark family, a predatory species named for its seafloor-dwelling habits.