Are Taco Bell's Cinnamon Twists Made by Deep-Frying Rotini Pasta?

The online world seems a bit confused about the existence of various types of dough. 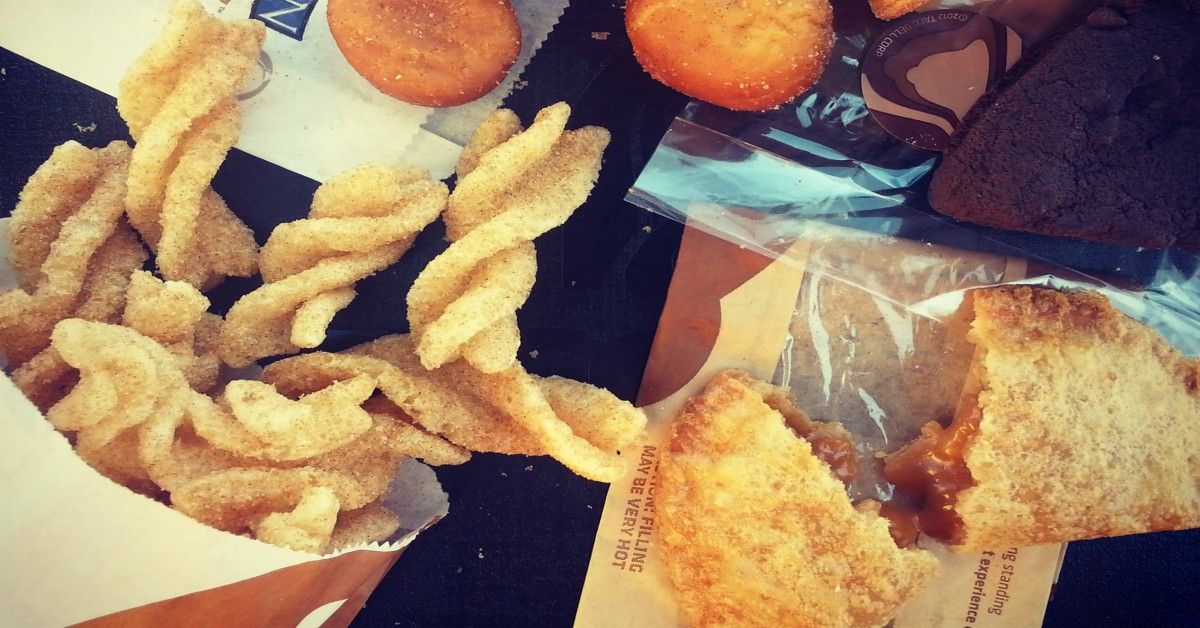 Taco Bell's Cinnamon Twists do resemble dry rotini pasta before they are cooked, but there wasn't much truth to this rumor. (Courtesy: Taco Bell)

Taco Bell's cinnamon twists are not made by deep-frying rotini pasta, and home cooks can't make this sugary treat by simply putting store-bought dried rotini into a fryer.

In May 2019, a video supposedly showing the making of cinnamon twists vended by the ubiquitous Taco Bell fast food chain went viral on Tik Tok (and subsequently other social media platforms), along with the claim that the Taco Bell produced their delicious deserts through the process of deep-frying rotini pasta:

I HAVE BEEN BAMBOOZLED???? pic.twitter.com/2z7EBuYbBS

The clip appears to be a genuine video of cinnamon twists being made at Taco Bell, but those treats are not made by deep-frying rotini pasta. This claim seems to be based on two things: the fact that cinnamon twists resemble dry rotini pasta before they are cooked, and a basic lack of dough knowledge.

To our surprise, the rumor that Taco Bell turns out cinnamon twists by deep-frying dry pasta (specifically the same boxed rotini available at most grocery stores) has actually been circulating online for more than a decade:

We found multiple memes, images, articles, and videos all centered on this rumor. In 2006, for example, the blog "Secret Recipes" listed "Rotini Noodles" as one of the main ingredients for Taco Bell's cinnamon twists, and in 2013 Food Beast unveiled the "mindblowing truth" about cinnamon twists.

The popular entertainment YouTube page "BabbleTop" spread this rumor through claiming in a video entitled "10 Secrets Taco Bell Employees Will Never Tell You" that "Cinnamon Twists [are] just rotini pasta that has been deep fried":

You might think that something so good would be a whole complicated process, but you'd be wrong. That's because the secret to the Cinnamon Twist is just rotini pasta that has been deep fried. That's right, the desert that everyone goes crazy for after they've finished their enchirito is simply deep fried pasta tossed with cinnamon and sugar. Does that mean that you can make the cinnamon twists at home.

Taco Bell's cinnamon twists are not made by deep-frying rotini, and you absolutely cannot make these treats at home by putting store-bought dried Italian pasta into a deep fryer.

The only real "evidence" put forth to support this theory is that Taco Bell's cinnamon twists and rotini noodles resemble one another at first glance, as seen in a photograph supposedly showing cinnamon twists before and after they were cooked at Taco Bell was posted to the "MildyInteresting" section of Reddit in 2016. Although we have been unable to independently verify the following image, it does line up with comments from Taco Bell employees and other bits of media we've encountered about the twists: While the pre-cooked cinnamon twists seen above may resemble rotini pasta, that does not mean the pictured food item is rotini pasta. This same logic can be applied to vodka and water, the explosive C4 and modeling clay, cake flour and powder sugar, or identical twins. While these things may resemble one another, they are clearly distinctly different items.

In this case, we can simply take a look at the ingredient lists for Barilla's Rotini and Taco Bell's cinnamon twists to see that they are indeed two different products:

Those spreading this rumor seem to be unaware that a variety of doughs are used to create different types of food. Pasta, cookies, pastries, cake, pizza, and pie are all made with "dough," but nobody would mistake a bowl of spaghetti with a slice of pie.

These treats go by several different names, including "Pasta para duros," which may have led to some of the confusion over Taco Bell's cinnamon twists. While we're not entirely sure about origins of this snack food's name, "pasta para duros" is not the same pasta you'd find in a box of dry rotini:

They are called pasta para duros (hard paste), a Mexican snack made from wheat flour, corn starch, bicarbonate of soda and food coloring. Uncooked, they are about the size of a quarter, are a reddish-orange color, and they are very hard (which may be why they are called duros after the Spanish word for hard.) Once cooked these little colored wheels puff up to about 2-3 times their size and have a light, airy consistency similar to cheese puffs without the orange-flavored powder. Others have compared the taste and texture to that of pork rinds.

We found duros offered by a number of online sellers. While these wheat pellets are often sold in a "wagon wheel" shape, they also come in "twists" that certainly resemble the Italian rotini pasta. Here's a before-and-after deep-frying photo from an eBay listing for Duros-Mexican Wheat Pellet Twists: So what happens when you actually deep-fry rotini?

YouTuber Joe Robbins attempted to make Taco Bell's cinnamon twists at home by deep-frying a variety of dried rotini pasta. When the store-bought dried pasta was deep-fried, it turned into a hard, hot, and ultimately inedible mess. At the end of the video, Robbins successfully made cinnamon twists by using ingredients he received from a Taco Bell employee:

Taco Bell does not deep-fry rotini pasta in order to make their cinnamon twists. Similarly, home cooks cannot make cinnamon twists by putting store-bought dry Italian pasta into a deep fryer. While we can't detail exactly how Taco Bell makes their cinnamon twists, the restaurant chain's sugary snack is similar to the Mexican snack food duros, which are made by deep-frying wheat pellets.

We've reached out to Taco Bell (and Barilla) for more information.