Did the Supreme Court Rule in 1943 That No One Can Be Forced to Participate in Patriotic Rituals?

The Supreme Court's 1943 ruling applied to school board officials and other government entities, not private sector enterprises such as the NFL. 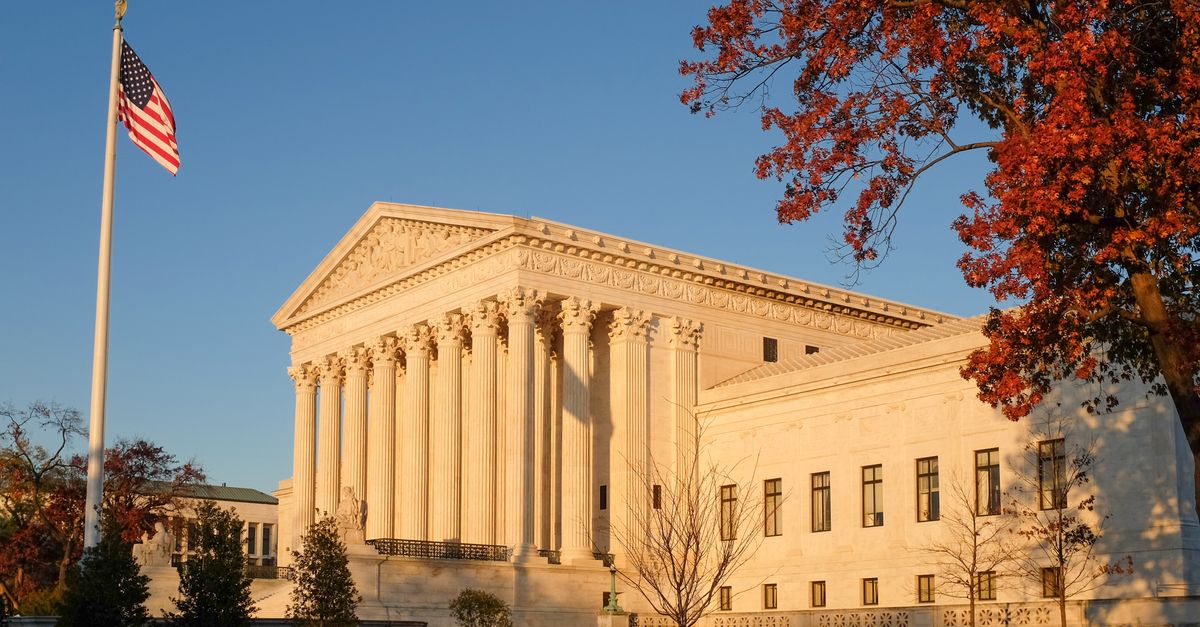 Claim:
In 1943 the Supreme Court ruled that no one can be forced to participate in patriotic rituals such as the Pledge of Allegiance and the national anthem, so calling for NFL players to be fired for "taking a knee" in protest amounts to calling for the law to be broken.
Rating:

The Supreme Court ruled in West Virginia State Board of Education v. Barnette (1943) that under the free speech provisions of the First Amendment, public school students cannot be compelled to participate in patriotic rituals such as the Pledge of Allegiance and the national anthem.

Neither the First Amendment nor the Supreme Court's 1943 ruling applies to private entities such as the NFL.

National Football League quarterback Colin Kaepernick sparked a national controversy in 2016 by refusing to participate in pre-game renderings of the U.S. national anthem, "taking a knee" instead to protest police brutality and the oppression of people of color in America.

Many of Kaepernick's fellow athletes in the NFL and other sports organizations followed suit, opening themselves up to public criticism for being "disrespectful" and "unpatriotic." They were even attacked by the President of the United States, Donald Trump, who repeatedly called on the NFL to suspend or fire them:

If a player wants the privilege of making millions of dollars in the NFL,or other leagues, he or she should not be allowed to disrespect....

...our Great American Flag (or Country) and should stand for the National Anthem. If not, YOU'RE FIRED. Find something else to do!

Other politicians, such as Rep. Jamie Raskin of Maryland, defended the players' right to free speech:

Hey Trump, @NFL players don't work for you and they have freedom of speech as Americans. #TakeAKnee https://t.co/5VJNLUGUdO

Expanding on that defense, a meme shared via social media in late 2017 promoted the claim that a 1943 U.S. Supreme Court decision affirmed everyone's legal right under the First Amendment to refuse participation in "patriotic rituals" such as the Pledge of Allegiance and national anthem.

"When you call for an NFL player to be fired," the argument went, "you are calling for the law to be broken": But this argument partakes of a common misconception concerning the First Amendment, namely the idea that it prohibits the abridgment of free speech not just by the government, but also by non-governmental entities such as private sector businesses. As employees of such businesses, National Football League players are subject to contractual obligations that can include limitations on their speech and behavior during the performance of their jobs, with no recourse to First Amendment guarantees.

The First Amendment itself makes no mention of free speech protections outside the context of government actions:

Congress shall make no law respecting an establishment of religion, or prohibiting the free exercise thereof; or abridging the freedom of speech, or of the press; or the right of the people peaceably to assemble, and to petition the Government for a redress of grievances.

The above-referenced Supreme Court decision (West Virginia State Board of Education v. Barnette, decided on 14 June 1943) held, by a 6-3 vote in favor, that forcing students to stand and recite the Pledge of Allegiance in public school classrooms constitutes compelled speech and violates the students' First Amendment rights.

The decision was actually a reversal of an early ruling (Minersville School District v. Gobitis, 1940) in which the justices upheld a local Pennslyvania school board's right to impose a compulsory flag salute on Jehovah's Witness students who wished to be excused from the ritual on religious grounds. The opinion held that the state's interest in fostering patriotic unity was greater than that in defending individual citizens' freedom of expression.

In its 1943 decision overturning Minersville, the court's rejection of that opinion was unambiguous:

If there is any fixed star in our constitutional constellation, it is that no official, high or petty, can prescribe what shall be orthodox in politics, nationalism, religion, or other matters of opinion or force citizens to confess by word or act their faith therein. If there are any circumstances which permit an exception, they do not now occur to us.

We think the action of the local authorities in compelling the flag salute and pledge transcends constitutional limitations on their power and invades the sphere of intellect and spirit which it is the purpose of the First Amendment to our Constitution to reserve from all official control.

But the court was also clear in specifying that it is government officials (in this instance school board members) who are proscribed from forcing people to participate in the flag salute or other patriotic ceremonies. No mention was made of such protections' covering employees of private sector businesses. With regard to "taking a knee," this means that while students in public school athletics programs may be protected by the First Amendment from disciplinary action by school authorities, professional football players aren't protected from the same punishments by their teams or the NFL.

Arizona State University law professor James Weinstein confirmed the point in an interview with KPNX News in Phoenix: "The NFL is not bound by the First Amendment. The First Amendment only applies to the government — state, federal, local." It is not illegal, therefore -- as regards the First Amendment or the Supreme Court's 1943 decision, at least -- for the NFL to take disciplinary action against protesting players.

That is not to say the court's opinion doesn't inform the public debate over the NFL controversy, however. The justices were firm in upholding the importance of intellectual and spiritual diversity in the face of strident demands for patriotic unanimity, whatever their source:

Struggles to coerce uniformity of sentiment in support of some end thought essential to their time and country have been waged by many good as well as by evil men. Nationalism is a relatively recent phenomenon but at other times and places the ends have been racial or territorial security, support of a dynasty or regime, and particular plans for saving souls. As first and moderate methods to attain unity have failed, those bent on its accomplishment must resort to an ever-increasing severity. As governmental pressure toward unity becomes greater, so strife becomes more bitter as to whose unity it shall be.

To believe that patriotism will not flourish if patriotic ceremonies are voluntary and spontaneous instead of a compulsory routine is to make an unflattering estimate of the appeal of our institutions to free minds. ... [F]reedom to differ is not limited to things that do not matter much. That would be a mere shadow of freedom. The test of its substance is the right to differ as to things that touch the heart of the existing order.

As of mid-August 2018, the enforcement of National Football League rules pertaining to player protests remained on hold pending an announcement by the league and the NFL Players Association of what the official NFL policy for the 2018-19 season would be. At the season's first game, an exhibition match between the Miami Dolphins and the Tampa Bay Buccaneers, three players took a knee at the opening bars of "The Star-Spangled Banner."

Waxman, Olivia.   "Why This Flag Day Is a Reminder That the Meaning of American Patriotism Is More Complicated Than You Might Think."     TIME.   14 June 2018.

FindLaw.   "Freedom of Speech in the Workplace: The First Amendment Revisited."     Accessed 13 August 2018.