Were Barricades Erected Outside Supreme Court in Response to 'Roe v. Wade' Leak?

The leaking of a draft majority opinion on the night of May 2, 2022, produced a significant response — nationwide and on the steps of the court itself. 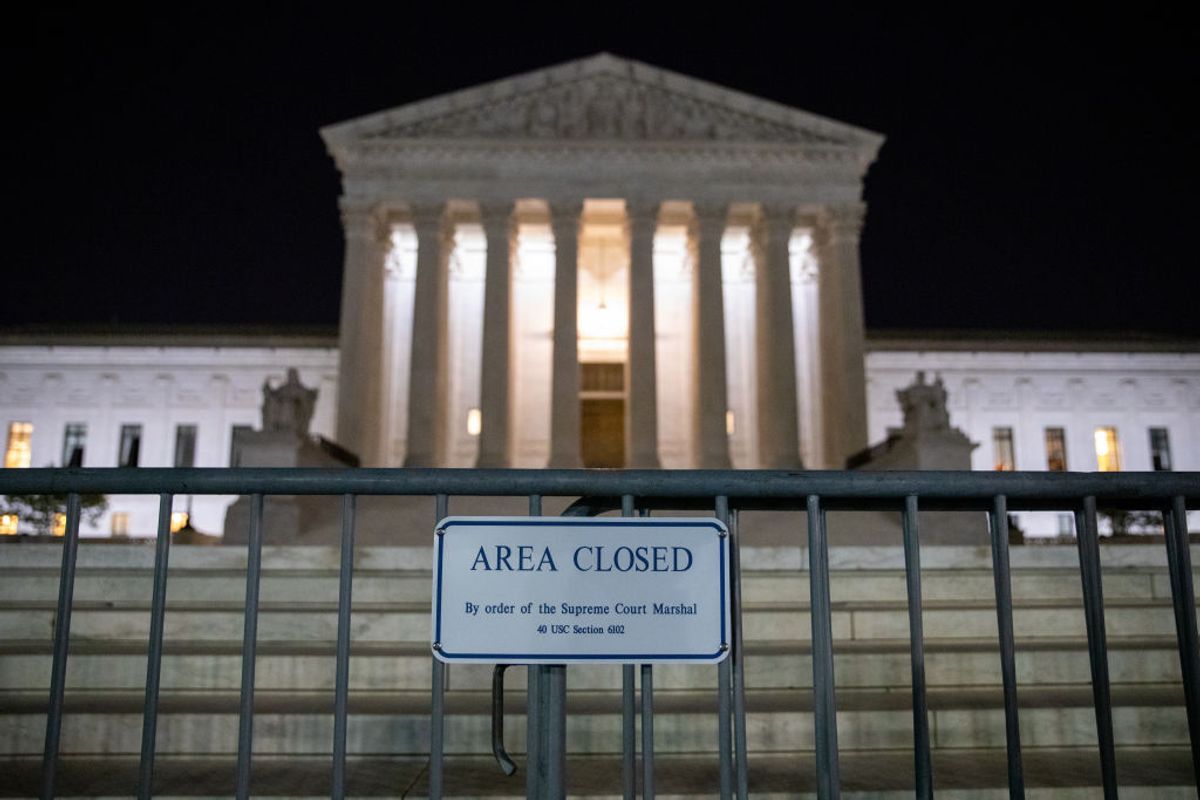 Claim:
On May 2, 2022, relevant authorities at the U.S. Supreme Court installed barricades outside the court in response to reports the justices had voted to overturn Roe v. Wade, and in anticipation of unrest.
Rating:

In May 2022, online observers highlighted claims that barricades were quickly erected outside the U.S. Supreme Court in Washington D.C., on the night of May 2, in anticipation of an angry response to the leaking of news that the court had provisionally voted to overturn the abortion protections enshrined in Roe v. Wade.

Clearly, there were more important and consequential questions surrounding the substance of that controversy, but the matter of whether, and when, security barriers were installed outside the court, was worth examining.

For what it's worth, we have not yet been able to definitively determine whether security barriers used on the night of May 2 were installed in response to the publication of the Roe v. Wade story, or at some earlier time. As such, we're issuing a rating of "Research in Progress," for now. If relevant evidence becomes available, we will update this fact check accordingly.

Politico published its report, based on an authentic leaked draft of an opinion by Justice Samuel Alito, at 8:32 p.m. Eastern time, on May 2.

In the hours that followed, numerous online commentators and observers, primarily those opposed to abortion rights, claimed that authorities had, in response to that story, installed barricades outside the court, in case of an angry response or acts of civil disobedience by abortion rights advocates.

For example, anti-abortion activist Kristan Hawkins wrote "As soon as the story is leaked, the Court put up barricades to protect themselves from the abortion industry." Similarly, right-wing commentator Kyle Becker wrote "Supreme Court Erects Barricades to Stop Protester 'Insurrection' Over Roe v. Wade Decision," and right-wing commentator Benny Johnson wrote "They would not be putting up barricades at the Supreme Court [if] Roe was upheld..."

Likewise, left-wing online commentator Brian Tyler Cohen wrote "Barricades are already up and surrounding the Supreme Court after it was leaked that they are planning to overturn Roe v. Wade," and cited a widely-shared photograph posted by Cami Mondeaux, a reporter for the conservative Washington Examiner, at 9:10 p.m., around 40 minutes after Politico published its report. Mondeaux wrote: "Right now: Barricades are up around the Supreme Court building, just minutes after reports from Politico were leaked indicating SCOTUS has voted to overturn Roe v. Wade."

The clear impression created by these social media posts was that the relevant authorities at the U.S. Supreme Court had quickly installed security barriers outside the court building, in response to the breaking of that story and in anticipation of potential unrest.

However, this picture is complicated by the fact that we know barricades were in place outside the Supreme Court just three days earlier.

On April 22, a Colorado climate activist named Wynn Alan Bruce set himself on fire outside the Supreme Court, and later died. One week later, on April 29, a vigil in his memory took place outside the court, and security barriers were clearly visible at the base of the steps on the western façade (the main entrance) on First Street: WASHINGTON, D.C. - APRIL 29: A vigil is held in front of the US Supreme Court in Washington, D.C., April 29, 2022, to honor Wynn Alan Bruce, 50, of Boulder, Colorado. Bruce self-immolated in front of the court building on Earth Day, April 22, 2022, and died from his injuries the following day. Bruce was a devout Buddhist, climate activist and photojournalist. (Photo by Astrid Riecken for The Washington Post via Getty Images)

The question that remains is whether those barriers were ever removed between April 29 and May 2, and therefore whether the barricades clearly visible during protests on the night of May 2 had been hastily put there in response to the Politico story.

So far, clear evidence on that issue is lacking. We know that at one point on the night of May 2, Supreme Court Police moved at least one barrier on the western steps of the court, as shown in the photograph below. That indicates — but does not prove — that at least some redeployment of barricades might have taken place in response to a gathering crowd of protesters: Police officers move barriers as pro-choice and pro-life activist gather at the US Supreme Court in Washington, DC, on May 2, 2022. (Photo by Stefani Reynolds / AFP) (Photo by STEFANI REYNOLDS/AFP via Getty Images)

However, reliable and authoritative sources of video and photographic evidence — for example photo agencies or even "Facebook Live" videos — do not provide a clear picture of whether the barricades, as a whole, were still in place outside the court on May 1 or on the morning and afternoon of May 2.

Snopes sent questions to the office of the Supreme Court's public information officer, and made several attempts to obtain the relevant information, but we have not yet received a substantive response. If relevant evidence becomes available, we will update this fact check accordingly.

Brasch, Sam. “A Boulder Climate Activist Died after He Set Himself on Fire. His Friends Remember His Talent and Compassion.” Colorado Public Radio, https://www.cpr.org/2022/04/25/boulder-climate-activist-wynn-alan-bruce-died-set-self-fire-friends-remember-him/. Accessed 3 May 2022.