Did a Man Commit Suicide Over a Black 'Star Wars' Character?

Fortunately, fanaticism for the 'Star Wars' franchise has not developed to this extreme. 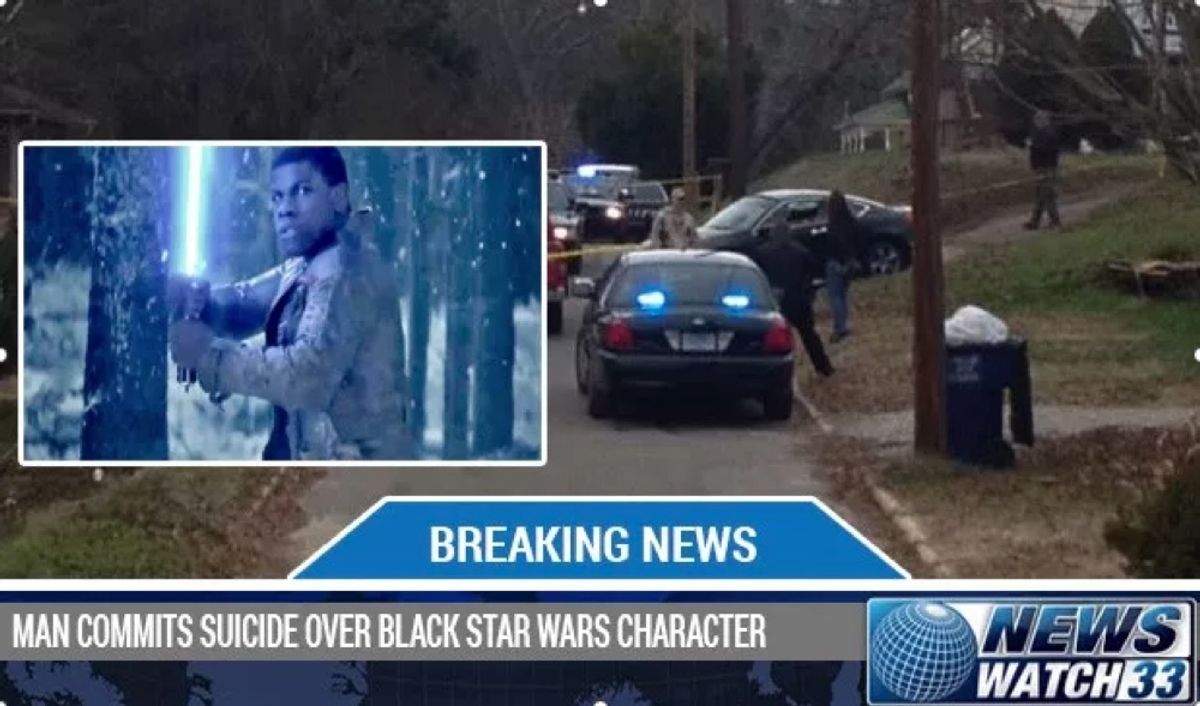 Claim:
Did a man kill himself because a main character in the Star Wars VII film is black?
Rating:

On 19 October 2015, the NewsWatch33 web site published an article titled "Man Commits Suicide Over Star Wars Main Character Being Black #BoycottStarWarsVII" (the headline playing on the #BoycottStarWarsVII hashtag that was popular on social media sites at the time, itself a probable hoax):

The article reported that a 53-year-old man named "Bobby-Jo Garrison" left a suicide note objecting to "white people [not being wanted] in Star Wars," a note that included the phrase "Make America White Again":

According to authorities, when the EMS and police arrived at the scene, Mr. Garrison was pronounced dead. Officer Jenkins retrieved the suicide note from Mrs. Garrison which mentioned an issue Garrison had with the main character of Star Wars being black.

Reportedly, part of the letter read, "If white people aren't wanted in Star Wars, then our money must not be either. I'm tired of seeing N**GERS taking over great white films. I can not live in a world being overran by Blacks. Sorry Sarah ...Another part of letter read, Boycott Star Wars VII because instead of using the force, they use affirmative action.

There was no truth to this story: NewsWatch33 was a fake news site camouflaged as a local television news outlet that had previously published fabricated stories reporting that supporters raised $4 million for the defense of Charleston shooting suspect Dylann Roof, that a girl was electrocuted by her iPhone's earbuds, that Jay-Z and Beyonce purchased the rights to the Confederate flag, that the federal government impregnated inexpensive cigars with listening devices, that fifteen days of darkness would occur in November 2015, and that an xBox disc killed a gamer upon its ejection.