Man Uses Taser on Himself

Man who uses a Taser stun gun on himself describes the experience? 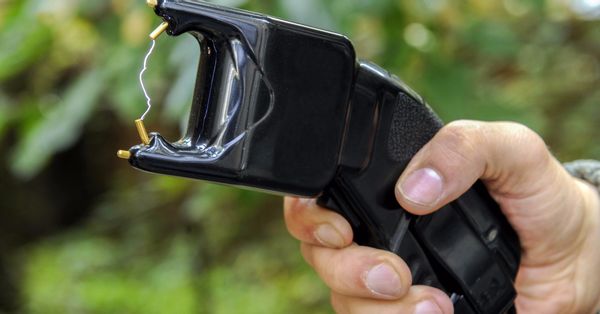 Claim:
Man who uses a Taser stun gun on himself describes the experience.
Rating:

This story about a protective husband trying out his wife's taser upon himself to ascertain its ability to take out a mugger first appeared on the Internet in July 2004. For now its author is unknown to us, leaving the question of "But is it a true story?" up in the air.

This same narrative has landed in the snopes.com inbox numerous times, often altered by small textual differences, such as variations in the storyteller's name (Art, Earl, Tommy, J.J., Clem, Mike), his wife's name (Toni, Kelly, Gisele, Melanie, Gerry, Kathy), the anniversary (18th, 22nd, 30th, 36th, or just "our anniversary"), and even the name of the shop where the item was purchased (Larry's Pistol and Pawn [with or without the "Shop"] or Ski's Pistol and Pawn Shop). In some e-mails the yarn is augmented by one of two endings (see below) followed by the closing salutation of "Still in shock," a simultaneous use of the literal and figurative:

By the way, has anyone seen my testicles? I think they ran away. I'm offering a reward.

By the way, has anyone seen my testicles? I think they ran away. I'm offering a reward. They're round, kinda hairy, and handsome if I must say so myself. Miss 'em; sure would like to get 'em back...

With regard to these small textual changes, it is perhaps a case of the dog that doesn't bark that suggests (at least to me) this story is more likely a work of fiction than a humorously-phrased account of an actual event. In specific, the non-barking dog is actually a non-meowing cat — amid the whirlwind of changing names and shifting details, the name of the moggie who witnesses the self-Tasering never alters: she is always Gracie.

While pop culture recognizes a number of Graces (e.g., Grace Kelly, Grace Slick, Grace Jones, Grace Metalious), it knows only one Gracie: Gracie Allen, the distaff member of one of the rare guy-and-girl comedy teams to make it to the top. Gracie's partner was her husband, George Burns; and while George Burns successfully continued his lengthy career after her death in 1964, all of Gracie's comedy work was done with him, making it impossible to think of Gracie Allen without George Burns also immediately coming to mind. In this sense, her name acts as a mental prompt for his. And therein (potentially) lies the clue: Burns. The name of Gracie's comedian husband, and also the result of being zapped with a stun gun.