Was a Student Suspended for Staying in Class During National Walkout Day?

The reasons behind a high school student's suspension were misconstrued in a debate over a national gun violence walkout protest. 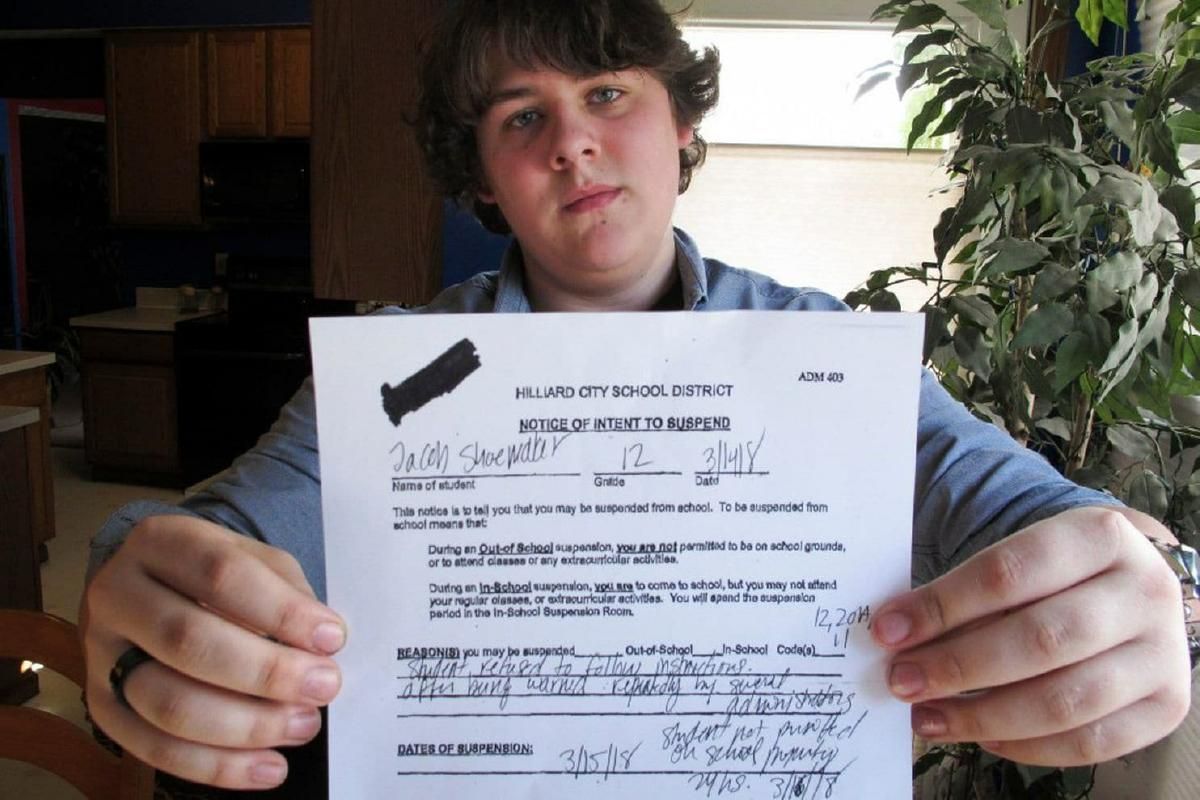 Claim:
An Ohio high school student was suspended for not participating in a walkout protest over gun violence.
Rating:

A twelfth-grade student in Ohio was suspended after he remained in a classroom while his classmates took part in a walkout protest.

The student was suspended for failing to report to study hall as directed, not for refusing to take part in the protest.

On 17 March 2018, Fox News published a news story reporting that a high school student in Ohio had been suspended for not joining his classmates and participating in a walkout protest over gun violence:

An Ohio high school student said he tried to stay apolitical during the National Walkout Day over gun violence but was suspended for his choice to remain in a classroom instead of joining protests or the alternative, going to study hall.

Jacob Shoemaker, a senior at Hilliard Davidson High School, said he didn’t want to take sides in the gun-control debate consuming the country. If he went outside for the walkout, he said, he would be supporting gun control. If he stayed in the common area of the school, he said, he would be seen as supporting gun violence and disrespecting the 17 lives lost in the Parkland, Fla. High school shooting the month before.

He decided, instead, to stay in class for about 20 minutes doing homework after his teacher and fellow classmates left and locked the door.

When they returned, he was slapped with a suspension.

This story was widely shared on social media, and some viewers who did not read it carefully (or at all) mistakenly inferred from it that Shoemaker had been suspended for opposing the protest and/or taking a pro-gun rights stance.

But as the original noted, Shoemaker "said he didn’t want to take sides in the gun-control debate" and he was suspended not for refusing to participate, but for "remain[ing] in a classroom instead of joining protests or the alternative, going to study hall."

That last aspect was a key point, one that led to much online posturing and argument over what had actually occurred, according to the school district and the Shoemakers:

The now-viral story is 100 percent false, the Hilliard district says. [Scott] Shoemaker says that the story is partially true, but not in the way the sharers are trying to spin it.

“There are a lot of groups out there that are using this to push an agenda, and I don’t appreciate that,” said Shoemaker, whose son Jacob, a Hilliard Davidson 12th-grader, was suspended.

On Twitter, users are sending around the photo with such hashtags as #GunControlNever, #Indoctrination, #LiberalismIsAMentalDisorder. One retweeter said, “George Orwell’s 1984 dystopian society ruled by government.” Another commented, “Penalized for not falling in line with Marxist social engineering?”

The crux of the dispute was that Jacob wasn't literally suspended for not joining in the protest. Rather, he was offered the choice of taking part in the walkout along with his classmates or sitting out the event in study hall, but he felt that following either course of action was tantamount to taking sides, so he opted to remain in his classroom during the protest. According to his father, Jacob was then suspended for failing to follow instructions:

Jacob told his father that he felt like other students and, to some extent, school officials were pressuring him. Each side was judging the other.

"The biggest problem, Dad, is that there shouldn’t be politics in the classroom ... I may just sit in my seat. As far as I’m concerned, that’s the least intrusive of the choices I’ve been given," Jacob said, according to his father. The boy also told him that he was far from the only student who felt that way.

So Jacob did stay in his seat. About an hour after his lone act of civil disobedience, he was handed the out-of-school suspension for failing to follow instructions to either join students outside or those in the study hall.

“He stayed in the classroom, where he was supposed to be in the first place,” Shoemaker said. “It’s kind of ironic.”

Scott Shoemaker also posted on Facebook to say that his son had essentially been punished for not wanting to choose a side:

A school district spokesperson couldn't state the specific reasons behind Jacob's punishment, but she confirmed that he was suspended and strongly suggested the reason for his suspension was the one voiced by Jacob's father:

Raterman was prohibited by federal student privacy laws from discussing whether Jacob was punished for anything. She did confirm that the suspension slip in the photo is a real one.

The school district also posted a statement asserting that the walkouts were "memorial events to show support for fellow students from Marjory Stoneman Douglas High School" which were not "political in nature," that "no one was disciplined for not participating," and that policy requires they "do not leave students unattended in classrooms":

After the horrific events of February 14, 2018 in Parkland, Florida, students across the United States were encouraged to take part in school “walk outs” on March 14, 2018. Our administrative team in the Hilliard City Schools met shortly after the announcement of these walkouts to discuss concerns and create plans for our three high schools. We met with the Hilliard Chief of Police to discuss safety concerns and worked with our school resource officers. The security, safety, and supervision of students during a large-scale walkout was paramount in our planning.

Each of our three high schools opted to engage student leaders. With the guidance of school administration, the students in each school planned memorial events to show support for their fellow students from Marjory Stoneman Douglas High School. These events were not designed, nor were they carried out, as political in nature.

In all three high schools, students who chose not to participate in the memorial gatherings were offered the opportunity to remain in the building, under the supervision of school personnel. As a district, we are required to supervise students during the school day. We do not leave students unattended in classrooms. This is the same practice our district implements when students opt out of other school programs or activities. We provide an alternative, supervised location.

There is inaccurate and false information being circulated regarding both the intent of these gatherings and the events that took place during a specific activity at Davidson High School. These gatherings were not political events; they were respectful gatherings remembering the senseless loss of young people. No students were forced to participate. In fact, student participation overall was well under 50% of the student population. The majority of students were comfortable and confident in not participating in these gatherings.

Students who chose not to participate were provided safe, supervised alternatives in all three high schools. No one was forced or coerced to participate. No one was disciplined for not participating. Our school culture respects the rights of all students. We strive to provide a safe environment for all students, but we do expect students to follow directions and comply with staff requests. This is required to maintain an orderly school environment.

The Columbus Dispatch quoted Hilliard's spokesperson as lamenting that “We purposely let these students create these events to allow students to mourn and to avoid the politics, and now here we are getting taken to task for this. It’s a bit of a shame."

Eltagouri, Marwa. "A Student Was Suspended After Staying in Class During Walkouts. Here’s What Actually Happened."     The Washington Post.   16 March 2018.