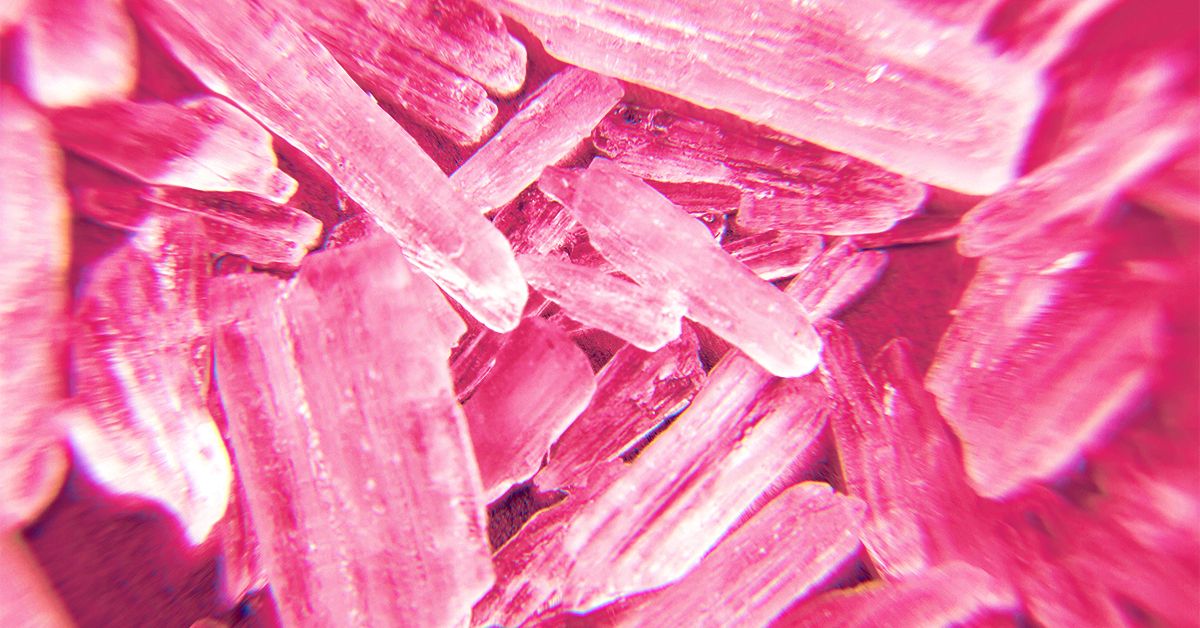 There's no credible evidence that drug dealers are manufacturing colored and flavored versions of meth (imitative of candy) with the intent of making them appeal to children.

In early 2007, warnings began to circulate about sweetened and flavored forms of methamphetamine known as "Strawberry Quick" (or "Strawberry Quik," named after strawberry Quik, a powder used to make flavored milk drinks). Various news accounts about Strawberry Quick first reported it appearing in western states in January 2007 and described it as resembling rock candy or Pop Rocks (a kid-favored confection that fizzles in the mouth), prompting fears that it might fool children and teens into mistakenly perceiving it as candy (or perceiving it as a drug far less dangerous and addictive than it actually is):

I have been alerted by one of our EMT's for our volunteer fire department that they have received emails from emergency responder organizations to be on the lookout for a new form of Crystalized Meth that is targeted at children and to be aware of this new form if called to an emergency involving a child that may have symptoms of drug induction or overdose.

They are calling this new form of meth "Strawberry Quick" and it looks like the "Pop Rocks" candy that sizzle in your mouth. In it's current form, it is dark pink in color and has a strawberry scent to it.

Please advise your children and their friends and other students not to accept candy from strangers as this is obviously an attempt to seduce children into drug use. They also need to be cautious in accepting candy from even friends that may have received it from someone else, thinking it is just candy.

ALL PARENTS PLEASE BE AWARE!! ...There is a drug going around the schools ..Its known as Strawberry Quick ...or strawberry meth ...it looks like pop rocks kids eat & also smells like strawberries & also comes in other flavors like chocolate, etc. ... Please tell your children not to take candy from ANYONE- even a class mate- because this drug that looks like pop rocks is actually crystal meth rocked up with strawberry flavor & can KILLl them :'( ...PLEASE REPOST!!! so all parents are aware of this ..Thank You! This is happening all over the country..

As of September 2017 versions of the warning still circulated on social media, some appended with a new image of the purported "strawberry quick": However, after those early warnings about Strawberry Quick worked their way to the public through police, schools, and the news media, federal drug enforcement officials began issuing corrections that described such rumors as unfounded. While colored versions of methamphetamine that somewhat resemble candy may have been found, the notion that drug dealers are deliberately targeting children by producing flavored versions of the drug intended to mimic the appearance and taste of candy appears to have been based on mistaken assumptions: When colored versions of meth turn up, the coloring of the drug is likely incidental to the manufacturing process (rather than a quality deliberately introduced to increase the appeal of meth), and since police labs don't generally test drugs for flavoring ingredients, statements about seizures of flavored meth have probably been based solely on the drug's brightly hued appearance and not on its actual taste.

As a DEA spokesman observed in 2010, the rumor about "strawberry quick" had "nothing to it":

An e-mail is circulating — forwarded from one worried parent to the next — claiming that drug dealers are targeting children with a pink, berry-flavored methamphetamine known as "strawberry quick." While the e-mail is composed of unnerving details, pleading with recipients to pass it along, authorities said its claims are little more than "urban legend."

"We checked with all of our labs, and there's nothing to it," U.S. Drug Enforcement Administration spokesman Michael Sanders said. "It's not a trend or a real problem; I think that this was maybe someone with good intentions but jumped the gun."

The e-mail scare started circulating around 2007, making its way from community to community, and eventually was picked up by newspapers and television stations across the nation. Even law enforcement bulletins and school officials ran with it.

Still, Sanders said, the DEA has never heard of anyone adding strawberry flavoring to meth, and are not aware of any children admitted to hospitals in dire condition because of it. He noted that on at least one occasion they found colored meth, but determined that the person cooking it added the dye to skirt law enforcement rather than lure kids.

The Partnership at Drugfree.org received similar responses from the DEA when they attempted to run the "strawberry quick" rumors to ground:

Both the DEA and the White House Office of National Drug Control Policy told Join Together that they have not been able to identify a single confirmed seizure of flavored meth."There are a lot of people in prevention and law enforcement talking about it, but in terms of actual seizures we haven't seen much," said Tom Riley, a spokesperson for ONDCP. Rojean White, a spokesperson for the DEA, told Join Together that while local DEA agents have heard stories about flavored meth from local law-enforcement colleagues, they "haven't had any" seizures themselves.

Experts say that there's a real possibility that local police are confusing colored meth — which is relatively common — with flavored meth. Tom McNamara, a meth trainer and special-projects coordinator for the Southern Illinois Drug Task Force Group, told Join Together that meth made from Sudafed or some generic versions of the drug will have a light-pink color because of the dye used in the pills. Moreover, he said, meth made from anhydrous ammonia treated with GloTell — a chemical marker designed to discourage thefts — will be bright pink. The drug also can appear greenish or blue.

"We've had that forever," said McNamara of colored meth, whereas his inquiries about flavored meth have yielded nothing.

"The warnings are well-intended, but they have no substance," he said.

And, as many others have noted, rumors of illegal drugs produced in a form intended to appeal to young children have been circulating for several decades and make little sense, as young children do not generally have the disposable income necessary to purchase such products.

Nonetheless, in April 2007, U.S. Senators Feinstein and Grassley responded to the "strawberry quick" rumors by introducing legislation aimed at increasing the criminal penalties for anyone who markets or makes candy-flavored drugs by imposing upon them the same enhanced criminal sentences handed down to drug dealers who knowingly sell to minors.