Are Stores Locking Up Tide PODS So People Won't Eat Them?

Although stores are securing Tide detergent PODS in locked cases, retailers confirmed the measure was not related to any social media challenge. 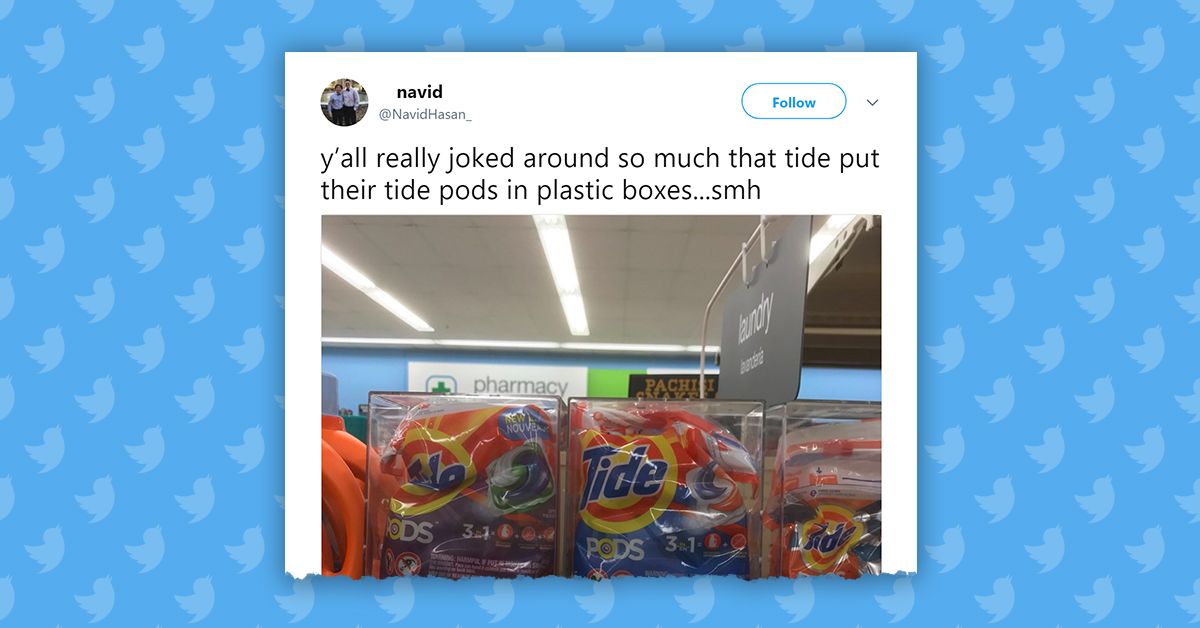 In January 2018 a fad known as the Tide PODS challenge -- in which people posted videos of themselves eating the laundry detergent product -- drew worldwide attention for the potential danger to human health. Shortly afterwards, rumors surfaced that retailers had begun "locking up" the product:

y’all really joked around so much that tide put their tide pods in plastic boxes...smh pic.twitter.com/Z44efALcX5

Early social media posts about the purported safety measure typically included images of Tide PODS secured on retail shelves, but lacked any evidence that the measure was related to the dangerous fad. Mashable non-committally noted of the swirling claims:

You know a meme has gone too far when people start sharing images of Tide Pods locked up at their local store.

Several retailers including Walmart, Walgreens, Ralph's, and Food 4 Less have locked up Tide Pods in plastic blocks or behind glass doors, according to recent social media reports. The protective measure was noticed as the Tide Pods internet challenge and meme hit peak stupidity.

However, the article went on to say that retailers had locked up the product before the Tide PODS Challenge became popular:

A manager at the Houston, Texas Walgreens pictured in the above tweet said over the phone that the Pods were secured in plastic boxes due to recent thefts. Other retailers, like Walmart and Kroger, also noted that thefts forced them to lock up the Tide Pods, but they did so prior to the internet hysteria.

However, that didn't stop local news affiliates from reporting that the Tide PODS challenge had definitively prompted the additional security measures:

Tampa station WTSP reported that the challenge led to "local stores locking up their detergent," but offered no evidence that the product was being secured solely or newly for that reason. Moreover, that same article contradicted its own claim by indicating that the measure preceded the January 2018 fad:

Walgreen Stores, another big retailer, says they've done the same thing at selected locations for years. But, company spokesperson James Graham says the detergent deterrents are, "unrelated to more recent reports of misuse of the products."

Obviously, locking up the detergent pods might deter theft, but certainly wouldn't stop a teenager from simply grabbing a Tide pod from their family's kitchen and eating it on camera.

Reports from as early as 2012 indicated that Tide-brand detergent had a high rate of theft. In March 2012, ABC News reported an uptick in Tide thefts, and in January 2013 WCPO.com broadcasted a segment about the appearance of security tags on Tide detergent:

We contacted Walgreens spokesperson James Graham to ask about whether the new batch of claims about security measures were accurate. He said there had "indeed been some misreporting" on the rumor, explaining:

Many of our stores have had additional security measures in place for certain detergent products for a number of years. As with other select product categories, these measures were taken to help prevent theft, and were unrelated to more recent reports of misuse of the products.

Likewise, a representative for Walmart said that securing of specific products was done on a store-by-store and case-by-case basis, often affecting items such as razors, baby formula, and laundry detergent, and depending on loss prevention needs in a given area. The representative affirmed that the securing of Tide PODS was not "tied to the social media [trend]" in any way."