"Throughout his career in public service, Mr. Scalise has spoken to hundreds of different groups with a broad range of viewpoints." 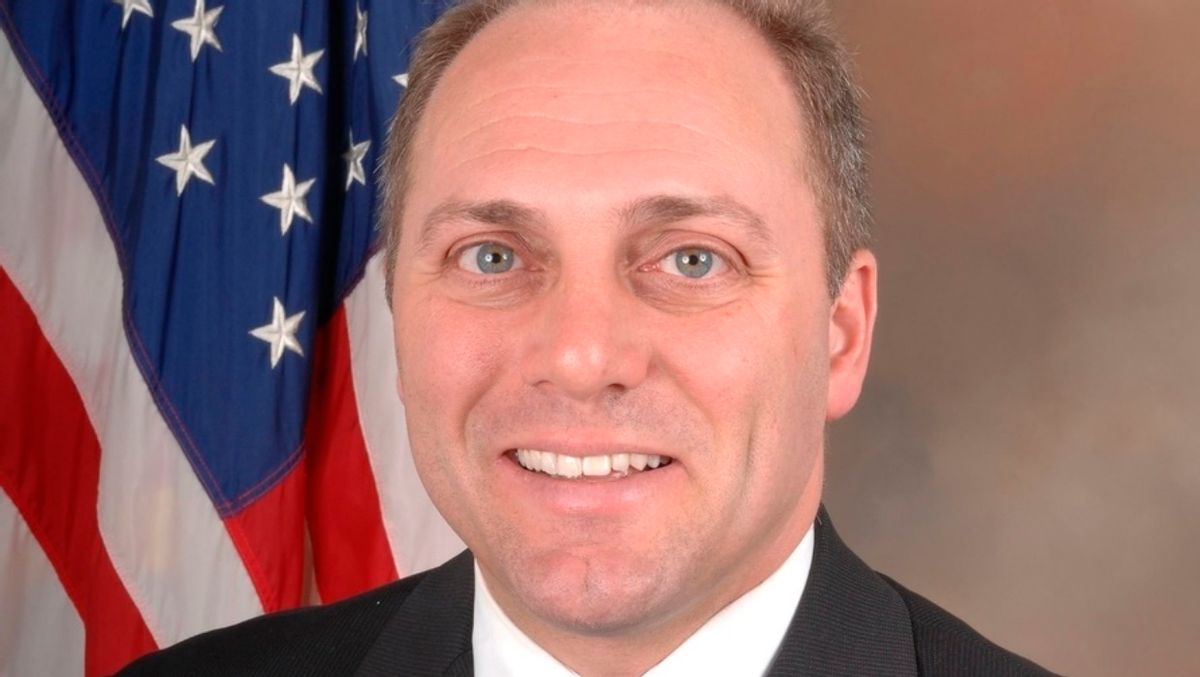 On 2014, the web site CenLamar published an article titled "House Majority Whip Steve Scalise Was Reportedly an Honored Guest at 2002 International White Supremacist Convention." According to the site, current House Majority Whip Steve Scalise, then a Louisiana state representative, was a guest speaker at an event hosted by the Unity and Rights Organization (EURO), a group headed by former Klan leader and neo-Nazi David Duke, at the Landmark Best Western Hotel in Metairie, Louisiana, in (EURO was a renamed version of Duke's group that advocated fighting for "white civil rights" for "Europeans and Americans wherever they may live.")

The dozen years elapsed between the EURO event in 2002 and the article's publication in 2014 made it markedly difficult to investigate the article's claims. At the time of the convention, much political discussion occurred solely on message boards, many of which have long since been retired due to inactivity, abandoned, or became otherwise inaccessible for a variety of reasons.

Following the article's publication, the claim was circulated and reposted on a number of web sites. This repetition created the impression multiple sources were documenting the claim, but the information all pointed back to the same single source: Stormfront.org, a white supremacist message board with a lengthy and notorious history on the web.

A 2002 post claiming Scalise attended the EURO conference held in Metairie that year became suddenly notable in late 2014. In that post, the writer stated:

EURO's recent national convention held in the greater area was a convergence of ideas represented by Americans from diverse geographical regions like California, Texas, and the Carolina's. This indicates that concerns held are pervasive in every sovereign state and Republic alike, within an increasingly diminishing view of where America stands on individual liberty for whites.

In addition to plans to implement tactical strategies that were discussed, the meeting was productive locally as State Representative, Steve Scalise, discussed ways to oversee gross mismanagement of tax revenue or "slush funds" that have little or no accountability. Representative Scalise brought into sharp focus the dire circumstances pervasive in many important, under-funded needs of the community at the expense of graft within the Housing and Urban Development Fund, an apparent give-away to a selective group based on race.

There was also a call for the many women active in the movement to not only let their voice be heard, but their presence known. Recognizing the duties placed on white mothers to maintain decreasing birth rates, it was an appropriate call to arms to emphasize the unity message forming the basis of EURO.

Aside from the single mention by a single user on one internet forum back in 2002, no other record of such an appearance by Scalise emerged. A newsletter of indeterminate origin appearing to be the work of David Duke, EURO's founder, listed the May 2002 event's speakers but did not mention Scalise: On 2014 Moira Bagley Smith, a spokeswoman for Scalise, addressed the controversy by releasing a statement seemingly acknowledging Scalise's appearance at the 2002 EURO event (without actually stating that he was there), maintaining that Scalise spoke to a number of diverse groups at the time in order to publicize his political platform and that Scalise held no affiliation with or sympathy for EURO and its objectives:

Throughout his career in public service, Mr. Scalise has spoken to hundreds of different groups with a broad range of viewpoints. In every case, he was building support for his policies, not the other way around. In 2002, he made himself available to anyone who wanted to hear his proposal to eliminate slush funds that wasted millions of taxpayer dollars as well as his opposition to a proposed tax increase on middle-class families. He has never been affiliated with the abhorrent group in question. The hate-fueled ignorance and intolerance that group projects is in stark contradiction to what believes and practices as a father, a husband, and a devoted Catholic.

Scalise himself also seemingly confirmed that he addressed a EURO group (again without actually stating that he did) in an interview with the New Orleans asserting that he didn't remember speaking at the event:

Q: Please walk me through how you came to appear at the white nationalist event.

A: "I don't have any records from back in 2002, but when people called and asked me to speak to groups, I went and spoke to groups. It was myself and [former state Sen.] James David Cain who were opposed to the Stelly tax plan.

I was the only legislator from the New Orleans area who was opposed to the plan publicly, so I was asked to speak all around the New Orleans region. I would go and speak about how this tax plan was bad.

I didn't know who all of these groups were and I detest any kind of hate group. For anyone to suggest that I was involved with a group like that is insulting and ludicrous.

I was opposed to a lot of spending of spending at the state level. When people asked me to go speak, I went and spoke to any group that called."

Q: You don't remember speaking at the event?

A: "I don't. I mean I've seen the blog about it. When you look at the kind of things they stand for, I detest these kinds of views. As a Catholic, I think some of the things they profess target people like me. At lot of their views run contradictory to the way I run my life.

Kenny Knight, a longtime associate of David Duke who said he booked space for the 2002 EURO conference, asserted that Scalise didn't actually speak at the EURO conference itself, but rather to a contingent of people (including some EURO attendees) who had gathered earlier in the day prior to the EURO conference

According to Knight, the EURO conference was slated to start in the early afternoon, roughly around But his reservation at the hotel gave him access to the conference space for a few hours before the event’s official kickoff. At the time, Knight headed the Jefferson Heights Civic Association, which was largely comprised of elderly people who lived in his and Scalise’s neighborhood.

Knight said he set up a morning event for his own civic association in the hotel space before the EURO conference started. Though that event was in the conference's hospitality room, it wasn't at all related to the EURO event, he said.

Knight invited then–state Rep. Scalise as well as a representative from the Jefferson Parish Sheriff's Office and a person from the American Red Cross to speak to the civic association at the hotel.

Knight estimates that about two-thirds to three-quarters of the people in the hospitality room at the civic association meeting were local residents who weren't there to attend the EURO event, and about one-third to one-quarter were EURO convention attendees who arrived early and filtered into the hospitality room to drink coffee and kill time.

However, the Times-Picayune then poked holes in a number of Knight's statements, namely his claims that he was not himself a member of EURO, did not line up speakers for the 2002 EURO conference, and was not himself present at the conference:

Kenny Knight [said] that he was not a member of the European-American Unity and Rights Organization, but documents filed with the Louisiana secretary of state's office list him as treasurer of its predecessor, the National Organization for European American Rights, in 2000.

Further, a May 16, 2002, news release on an an archived version of EURO's former website, www.whitecivilrights.com, lists Knight as "EURO Louisiana State Representative Kenny Knight." The release says Knight was expected to address the group's 2002, conference.

When asked by telephone about the records listing him as EURO's treasurer, Knight twice hung up on a reporter. "Is that 15 years ago? I don't even remember that," he said. "I'm not communicating any more with the news media. I'm finished with y'all."

EURO head David Duke himself stated in a Washington Post interview that Scalise had indeed been invited to address the EURO gathering and had accepted that invitation and was present at the conference (although Duke was not himself present at the event and therefore didn't personally witness whatever Scalise may have done there):

Former Ku Klux Klan leader David Duke said that his longtime political adviser, Kenny Knight, was "friendly" with House Majority Whip Steve Scalise in 2002, and cited that relationship as the reason Scalise accepted an invitation that year to speak at a gathering of white supremacists.

Duke recalled Scalise as a "nice guy" and said he was invited to the conference by two of Duke's longtime associates: Howie Farrell, who had worked on Duke's gubernatorial campaign, and Kenny Knight.

"Scalise would communicate a lot with my campaign manager, Kenny Knight," Duke said. "That is why he was invited and why he would come. Kenny knew Scalise, Scalise knew Kenny. They were friendly."

Duke, who spoke to the crowd remotely, recalled Knight reaching out to Scalise in the weeks before the conference to come and update attendees on state affairs, and that Scalise accepted without reservation.

"Maybe that is evidence he knew what he was doing when he came to the meeting," Duke said. "Who knows? All I know is that Kenny liked him."

Duke said he spoke to the conference twice, once by phone and later by video hookup. But he did not hear Scalise speak, he said, and does not know whether Scalise heard him speak.