An image misidentifying a man at a Vietnam War protest as Stephen Hawking went viral after the theoretical physicist's death in March 2018. 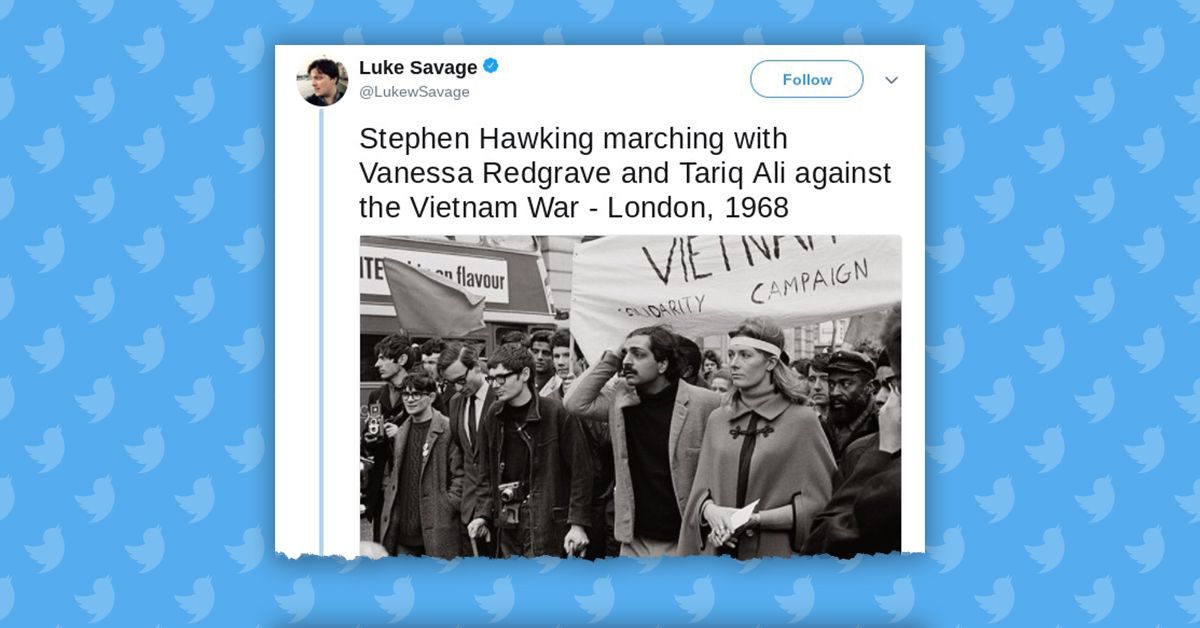 Claim:
A photograph shows Stephen Hawking at a Vietnam War protest in 1968.
Rating:

As social media users shared memories and photographs of renowned theoretical physicist Stephen Hawking in the wake of his passing in March 2018, a curious image purportedly showing the author of A Brief History of Time at a protest against the Vietnam War in London fifty years before started to go viral: This image has been mislabeled as a photograph of Stephen Hawking for several years. The version of this image available via the National Portrait Gallery, for instance, identified the man with the canes as Hawking. Photographer Lewis Morely, who captured the image, also identified this man as the world renowned physicist.

It wasn't until Tariq Ali, a political activist who truly is in this photograph, caught wind of the claim after Hawking's death that the record was set straight:

THE MAN IN THJE 1968 PIC IS NOT STEPHEN HAWKINGS

Sad that Stephen Hawking has left us...he opposed the Vietnam war and the genocidal adventure in Iraq. BUT he is not in the 1968 demo pic. Repeat NOT. An illiterate caption by the National Portrait Gallery has created this myth. Wish it was him but it iosn't so please no more emails on my FB regarding this.....

The National Portrait Gallery acknowledged the mistake and promised to correct their caption of the image:

Apologies and thanks for pointing this out. The individual was previously mistakenly identified as Stephen Hawking by the photographer. However, we have since discovered that this is incorrect. Our website will be updated by midnight tonight.

Robert Newsom, a Vietnam protester who shared images of the event with the BBC in 1968, noted that Tariq Ali and Vanessa Redgrave were headlining the march, but made no mention of Hawking's alleged attendance:

I was a 24-year-old American reading English at Cambridge and went down to London to participate and watch the anti-war protest that began in Trafalgar Square and moved on to the American Embassy in Grosvenor Square.

Along the way I took the pictures, among others, of Tariq Ali and Vanessa Redgrave, who were heading the march. I was surprised that I was able so easily to approach and photograph the lead marchers.

I remember being terrified at being chased down by what seemed like scores of mounted police with truncheons flailing about while the square was blocked off so that none who found themselves on the inside could get out.

We couldn't find a comparable image of Stephen Hawking from 1968. However, we're skeptical that the theoretical physicist would have been physically able to march along with Ali during this Vietnam protest. Hawking suffered from amyotrophic lateral sclerosis (ALS) and his physical abilities were already deteriorating in the late 1960s. According to the biography Stephen Hawking: A Life in Science, Hawking was having difficulty walking longer distances in 1968, and by the end of the decade he was using a wheelchair full time:

The 1960s ended with Hawking being forced to make a concession to his physical condition. After a great deal of persuasion from Jane and a number of close friends, he decided to abandon his crutches and take to a wheelchair. To those who had watched his gradual physical decline, this was seen as a major step and viewed with sadness. Hawking, however, refused to let it get him down. Although the acceptance of a wheelchair was a physical acknowledgement of his affliction, at the same time he gave it not the slightest emotional or mental endorsement. In every other way, life went on as usual. And he could not deny that it did enable him to get around more easily. Never giving in to the symptoms of ALS more than he is physically compelled to is all part of the Stephen Hawking approach to life. As Jane said, "Stephen doesn't make any concessions to his illness, and I don't make any concessions to him" That seem to be the way he has survived against the odds for so many years and also how Jane managed to remain sane living with him.

We have so far been unable to track down the identity of the misidentified man.