Does a Star of David on a Vehicle Traveling with the Migrant Caravan Prove Soros Is Behind It?

Junk sites pushed a white supremacist conspiracy theory in the days leading up to the Pittsburgh synagogue massacre. 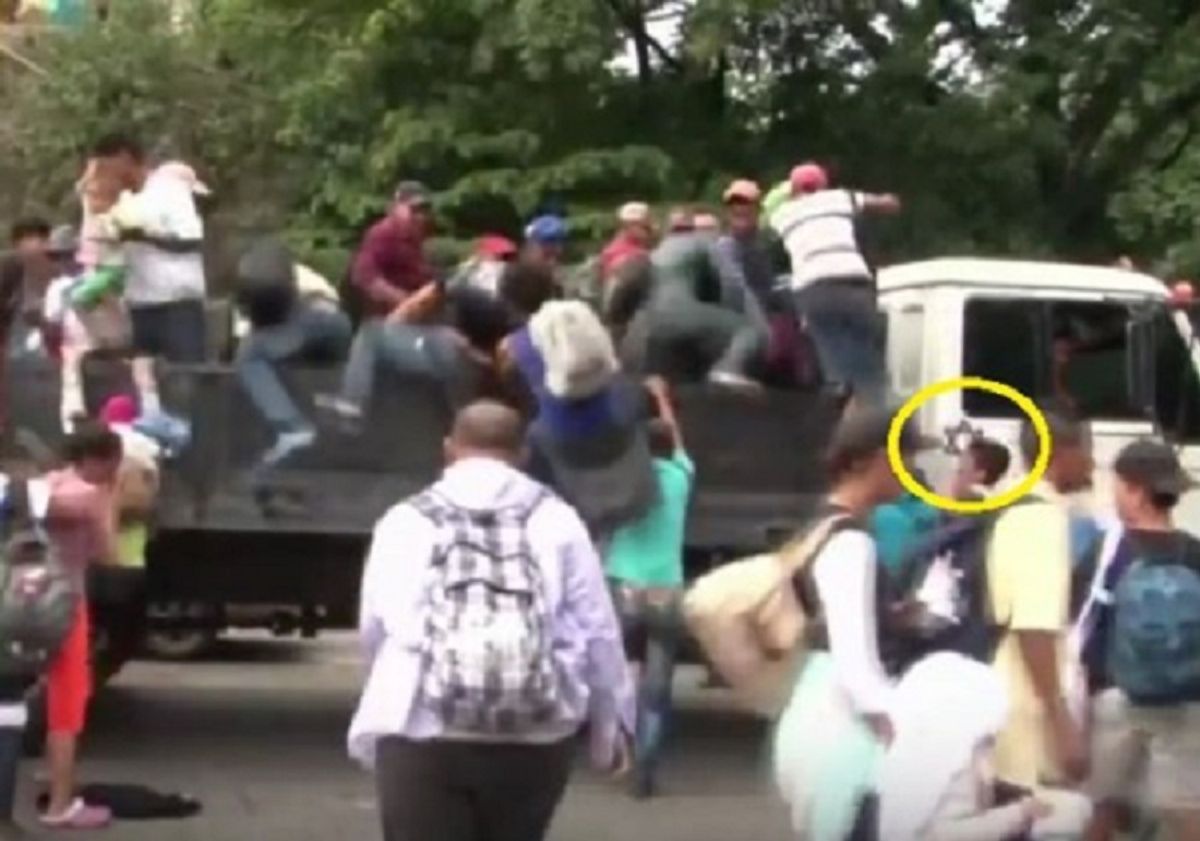 Claim:
A Star of David on a vehicle traveling with the migrant caravan proves George Soros is behind it.
Rating:

On 21 October 2018, conspiratorial hoax site FellowshipoftheMinds.com made a particularly ridiculous claim, reporting that what appeared to be a Star of David seen briefly in news footage on a caravan vehicle was sufficient proof that philanthropist billionaire George Soros was "behind" the migrant movement:

Sharp-eyed Courtney Tubbs of The Goldwater spotted a tell-tale clue in a Canadian propaganda “news” video:

Beginning at the 3:19 mark in the video, young male migrants invaders scramble onto an open-bed truck. The truck has a white cab.

At the 3:21 mark is a fleeting glimpse of a blue insignia on the cab — a Star of David.

Why is a Jewish truck providing transportation for the Central American migrants invaders, whose ultimate objective is to illegally cross the Mexican-U.S. border into America?

The truck with the Star of David is the visual evidence confirming Jamie White’s Infowars report on October 20, 2018:

"The UN and billionaire globalist George Soros are the driving forces behind the massive migrant caravan marching to the U.S. southern border, according to reports."

Unsurprisingly, nothing in the Fellowship of the Mind story could be considered credible information.

The Canadian "propaganda" video referenced is in fact a report by the public Canadian Broadcasting Corporation (CBC) news outlet, while "sharp eyed" Courtney Tubbs is a self-described "investigative journalist" who posts white supremacist, anti-Semitic and homophobic content on Twitter.

Meanwhile, Infowars is the infamous conspiracy network run by Alex Jones and banned by various social media platforms for abusive behavior. Jones is being sued by the parents of murdered Sandy Hook elementary school children for defamation, after years of his claiming the victims were "crisis actors" and driving a campaign of harassment against them.

The mere presence of the Star of David on a vehicle traveling with the migrant caravan is, of course, not proof that George Soros, a Jewish Holocaust survivor, funded it. The philanthropic Soros does donate to programs that help migrants, as do some Jewish charities. But the migrants, who set out from Honduras in mid-October on foot, are fleeing violence and poverty in their home countries and are not coming to the U.S. as part of a Jewish-led scheme to "invade" America.

The Fellowship of the Minds story and others like it play on the "white genocide" conspiracy theory, a belief held by white supremacists that Jewish people are engineering the destruction of the white race through immigration. In the lead-up to the Pittsburgh synagogue attack, Robert Bowers, the man arrested and charged with the crimes, wrote a series of messages on social media in which he appeared to reference that conspiracy theory:

Bowers posted a link to a page from the Hebrew Immigrant Aid Society (HIAS), a Jewish nonprofit that aids refugees. The HIAS link listed congregations across the country that held Shabbat services this month for refugees -- including several synagogues in Pittsburgh.

"Why hello there HIAS! You like to bring in hostile invaders to dwell among us? We appreciate the list of friends you have provided," Bowers wrote.

In a post about two hours before the shooting, Bowers wrote: "HIAS likes to bring invaders in that kill our people. I can't sit by and watch my people get slaughtered. Screw your optics, I'm going in."

Soros is a hedge fund billionaire and philanthropist who often donates to progressive causes and is the frequent target of anti-Semitic conspiracy theories. In the week leading up to the synagogue shooting, Soros, the CNN cable news network, and several prominent members of the Democratic party were targeted with mailed pipe bomb devices that failed to detonate.

Since a Central American migrant caravan set out from Honduras in mid-October, politicians including President Donald Trump have continuously fear-mongered about it. The caravan comprises roughly 3,500 people traveling north as of 31 October 2018, but they are still in southern Mexico, and their numbers have dwindled drastically from previous estimates of 7,000. Nevertheless President Trump has sent 5,200 active duty troops to the border and says he will send more as the midterm elections loom on 6 November 2018.