Did a Sperm Whale Die After Swallowing 64 Pounds of Plastic Debris?

A photograph of an art installation is frequently attached to genuine reports about a dead whale's washing ashore with trash and debris in its stomach. 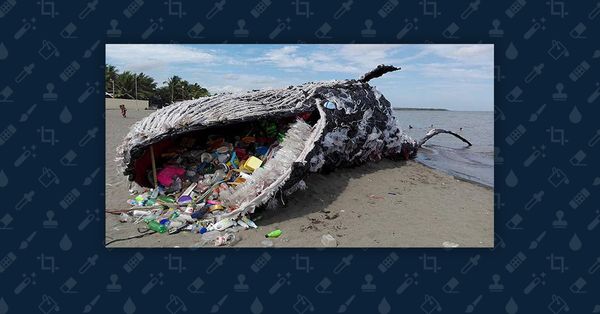 Claim:
A photograph shows a dead sperm whale that washed ashore after swallowing 64 pounds of plastic debris and other trash.
Rating:

An autopsy of a dead sperm whale that was found off the coast of Spain revealed more than 64 pounds of debris in its stomach.

An image frequently attached to this story shows an art installation created by Greenpeace Philippines in May 2017.

In April 2018, authorities completed an autopsy on a dead sperm whale that had washed ashore on the coast of southern Spain a few months before, and found that the marine animal's stomach was filled with more than sixty pounds of plastic and other debris.

When news of this disturbing discovery started to make its way around the Internet, many outlets included an arresting image which some readers mistook for a genuine photograph of the deceased animal. Forbes, for instance, featured the following image at the top of their article: The reports of a dead whale with a large amount of debris in its stomach are real; this photograph, however, does not show the deceased animal. This is an art installation that was created by Greenpeace Philippines in May 2017 to "underscore the massive problem of plastics pollution in the ocean and calls on the ASEAN to address this looming problem on its shores."

This replica of a dead whale is entirely made of plastic debris that was found in the ocean, and is located at the Sea Side Beach Resort in Naic, Cavite:

As groups gathered to haul off the dead whale, they noticed that its entire body was made of plastic wastes found in the ocean. The slimy innards sprawling out of its underbelly was a mix of plastic bags, remains of plastic containers, sachets, bottles and more. Photos of this morose installation spiraled around social media on the day itself, sparking conversations on plastics pollution—a topic far different from the viral oarfish photos in Mindanao that were said to be a sign of the “end of the world”.

THE CASE OF PLASTICS POLLUTION

Just in the first quarter of 2016, already more than 30 dead sperm whales were found washed up in the shores of Europe, with large amounts of plastic waste in their stomachs. Late last year, one of them was found here in Samal, Davao. The reaction of locals was almost baffling as they simply collected the whale’s carcass and transported it to a local museum where they usually display beached sea creatures found in the area. Authorities in Murcia, Spain did release a few photographs of the actual whale that washed ashore in February 2018, as well as images of the 64 pounds of debris that was found in its stomach, which included ropes, plastic bags, nets, and a gas canister: As can be seen in these photographs, the sperm whale was unusually thin. Experts from the El Valle Wildlife Recovery Center explained that the debris blocked the animal's digestive system, causing peritonitis that ultimately led to the animal's death:

A sperm whale's diet is usually comprised of giant squid. But the 33-foot long mammal that washed up on the beach of Cabo de Palos on February 27 was unusually thin.

The necropsy results, released last week, listed just some of the items scientists found stuck in its stomach and intestines: plastic bags, pieces of net, a plastic water container.

Officials said the whale died of an abdominal infection, called peritonitis: It just couldn't digest the waste it had swallowed, causing its digestive system to rupture.

This, say officials, is a concern not only because sperm whales are endangered, but also because it's another grim reminder of just how much plastic waste is being dumped into the ocean.

Around 150 million tons of plastic are already floating in our oceans — with an additional eight million tons entering the water each year, according to the World Economic Forum.

Although these images may appear shocking to some viewers, this animal was hardly the first to suffer from a similar fate. In 2016, for instance, researches found plastic debris in the stomachs of thirteen sperm whales that died off the cost of Germany.

An estimated 150 million tons of plastic are already floating in our world's oceans. A report from the World Economic Forum found that the amount of plastic in the ocean may outweigh fish by 2050:

Plastic has been found to choke marine wildlife, and has also entered the ocean food chain — exposing marine life to toxic chemicals that can end up in the food on our plates. Around 150 million tons of plastic are already floating in our oceans — with an additional eight million tons entering the water each year, according to the World Economic Forum. It is estimated that by 2050 there will be more plastic than fish in our oceans by weight if current rates of plastic dumping hold.