Did contestants in a Special Olympics event link arms and all cross the finish line together? 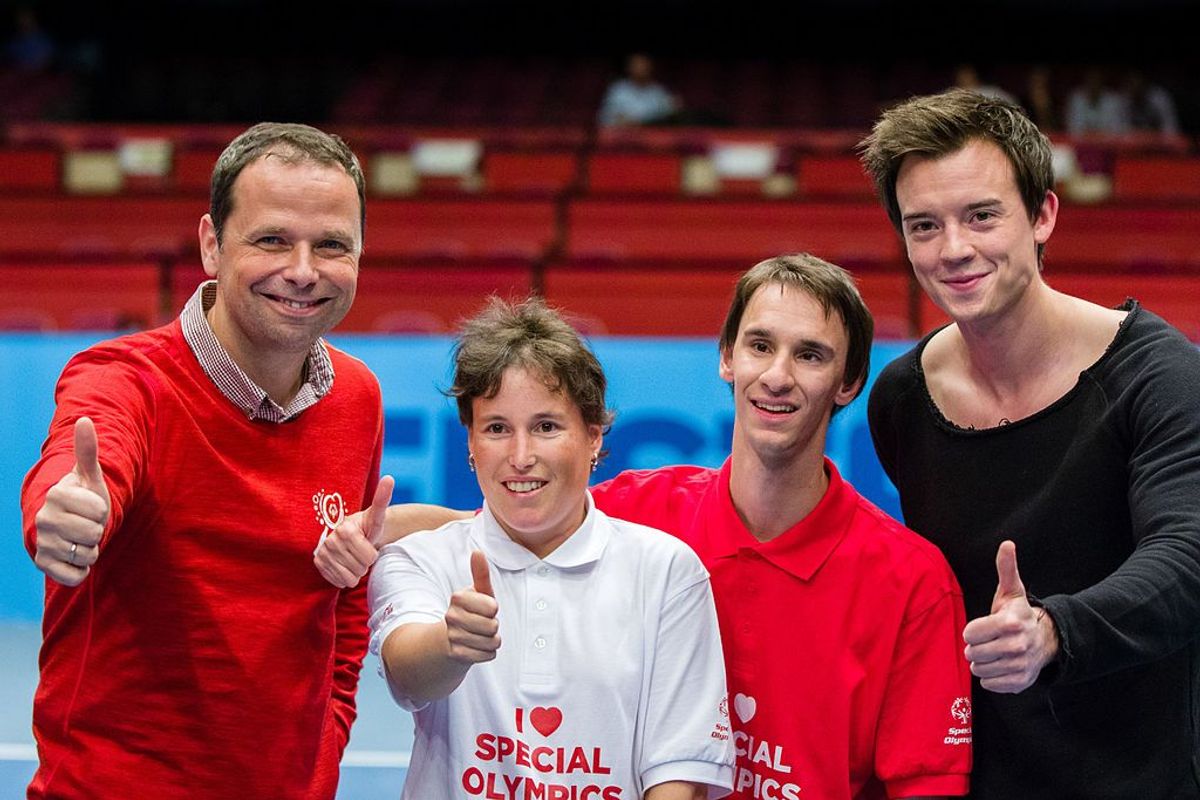 Claim:
Contestants in a Special Olympics race linked arms and crossed the finish line together.
Rating:

This story is partly true, although its primary point has been grossly exaggerated:

And they call some of these people "retarded" ...A few years ago, at the Seattle Special Olympics, nine contestants, all physically or mentally disabled, assembled at the starting line for the 100-yard dash. At the gun, they all started out, not exactly in a dash, but with relish to run the race to the finish and win.

All, that is, except one little boy who stumbled on the asphalt, tumbled over a couple of times, and began to cry. The other eight heard the boy cry.

They slowed down and looked back. Then they all turned around and went back ... every one of them. One girl with Down's Syndrome bent down and kissed him and said, "This will make it better." Then all nine linked arms and walked together to the finish line. Everyone in the stadium stood, and the cheering went on for several minutes. People who were there are still telling the story.

According to folks at the Special Olympics Washington office, the incident happened at a 1976 track and field event held in Spokane, Washington. A contestant did take a tumble, and one or two of the other athletes turned back to help the fallen one, culminating in their crossing the finish line together, but it was only one or two, not everyone in the event. The others continued to run their race.

The story is thus not about an entire class of "special people" who spontaneously tossed aside their own dreams of going for gold in favor of helping a fallen competitor, but rather one about a couple of individuals who chose to go to the aid of another contestant. Unfortunately, this tale as it is now being told helps further a stereotype.

We find comfort in the notion that the disadvantaged are blessed in other ways by a benevolent God who works in mysterious fashion to keep all things in balance, hence our desire to believe deficiencies in intelligence are compensated for by unfailingly sweet natures and a way

of looking at the world in childlike wonder. A story about disabled athletes linked arm-in-arm falls on receptive ears — it fits how we want to see these folks, thus (in a manner akin to a snake biting its tail) works to confirm the validity of the stereotypes we've chosen to adopt.

Our guilt over having more abilities than others have been blessed with is appeased by the belief that the mentally handicapped are better natured or in another way of a higher order. As long as we can believe the scales are being balanced in some inexplicable way, we can feel comfortable with our comparative good fortune.

Such stereotypes, no matter how comforting they are to us, are unfair and dehumanizing. They cast the mentally disabled as angels who smile benevolently from among us instead of as very real people who are every bit as capable of feeling and expressing the same emotions everyone else does. Just as the 19th century belief that woman was of a higher order than base, animalistic man and thus needed to be placed on a pedestal where she could be sheltered from contact with a brutal world kept her from being treated as a person in those times, so does the currently common characterization of the disabled as smiling cherubs who might not be able to talk to us all that clearly but who are constantly whispering in God's ear.

Special Olympians train long and hard for their events and are every bit as committed as athletes who compete in other athletic endeavors. The Special Olympics are not a casual get-together organized to give less fortunate members of the community a day to socialize and perhaps run in a foot race or two; they're highly organized sporting events taken very seriously by all involved, with each competitor striving to do his best. It's about trying. And succeeding.

The Special Olympics oath is "Let me win. But if I cannot win, let me be brave in the attempt."

Let us too be brave in our attempts to accept the less-abled for who they are.

Update:   In January 2013, news outlets reported on a somewhat similar story of a cross-country race participant who deliberately refrained from winning that event when his competitor mistakenly stopped just short of the finish line:

It's hard not to be a little cynical about the sporting world. The story of long distance runner Iván Fernández Anaya may serve as a welcome antidote. The Spanish runner, who trains in the Basque capital of Vitoria-Gasteiz, has become something of a cult hero for a kind gesture that helped an opponent win a race.Fernández Anaya was trailing behind Olympic bronze medallist Abel Mutai during a cross-country race in Burlada, Navarra. Mutai was leading comfortably until he pulled up 10 to 20 metres short of the finish line thinking the race was already over. Instead of passing Mutai, Fernández Anaya slowed down and told Mutai to keep running. Since they didn't speak a common language, the Basque runner gestured frantically at Mutai who went on to win the race.

"I didn't deserve to win it," Fernández Anaya told El País. "I did what I had to do. He was the rightful winner. He created a gap that I couldn't have closed if he hadn't made a mistake. As soon as I saw he was stopping, I knew I wasn't going to pass him."

Fernández Anaya's actions may not have earned him the win, but they did earn him many new fans.