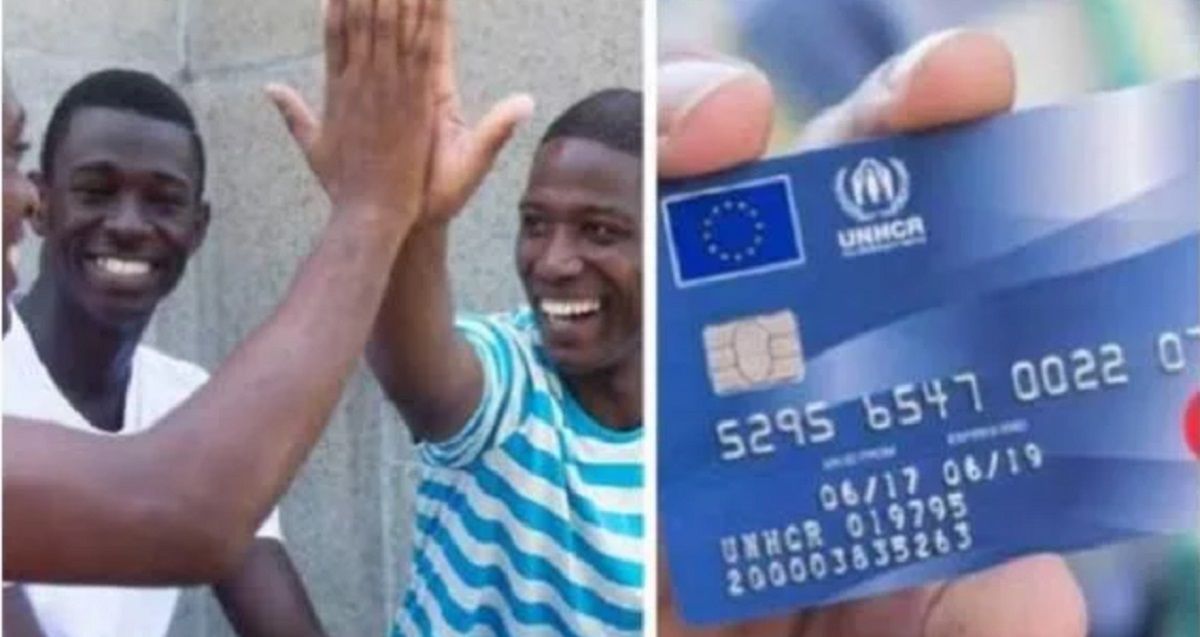 Claim:
George Soros is funding the distribution of prepaid MasterCard debit cards to refugees through the U.N.
Rating:

In November 2018, various conspiracy-pushing web sites glommed onto a dubious post emanating from Europe to gin up hysteria about both refugees and the United Nations.

The original story, published on the right-wing Slovenian website Nova24TV, "revealed" that immigrants were spotted in Bosnia and Herzegovina using MasterCard debit cards and included an accusation sourced to an anonymous "local police officer":

Migrants who are caught and sent back, in a few days or weeks again try to illegally enter Croatia. Some of them are really poor, but many of them are well-equipped: they have new footwear, new clothes, sophisticated smartphones, and some also have MasterCards with no names, just numbers. The cards can be used to withdraw money from ATMs, but we do not know who funds them.

The story also included a stock photograph of young black men who had no relationship to the events described in the article, alongside the caption "The image is symbolic": The "report" was soon picked up by equally dubious websites, some of which included the same image without mentioning that it was a stock photo used only for "symbolic" purposes:

Now the mystery has been solved regarding how so many poor migrants have been able to fund their illegal journeys to Europe.

The UN, EU and Soros, in partnership with MasterCard, have spent hundreds of millions of dollars providing migrants with prepaid debit cards -- and European tax payers have not been informed that their taxes are being spent on handouts to illegal immigrants. What those sites did do, however, was expand on the original story by employing a familiar anti-Semitic dog whistle and attempting to tie the claim to liberal billionaire George Soros by falsely citing Nova24TV's piece -- even though it did not mention him -- and saying that the United Nations Refugee Agency (UNHCR) was working "in cooperation" with Soros.

The UNCHR's program was launched in Moldova in 2011 and expanded in 2016. That program provided aid to 10.5 million people across 94 countries between 2016 and August 2018, with recipients accessing their money via cash machines or "mobile money" electronic payments distributed through specialized cell phones:

Vulnerable persons fleeing persecution and seeking asylum in Moldova can now use debit cards under a new UNHCR initiative to expedite the distribution of the agency’s monthly subsistence allowances.

Moldova is the first country in Europe where the UN refugee agency has implemented the debit card scheme to streamline the distribution of its monthly financial support via Automated Teller Machines (ATMs).

The new card scheme was launched by UNHCR, in cooperation with BCR Chisinau S.A. It enables needy refugees, asylum seekers and beneficiaries of humanitarian protection to receive convenient debit cards which they can use to withdraw the monthly support.

“UNHCR is very pleased to launch this initiative in Moldova as it enables people to withdraw funds at nearby bankomats at their convenience rather than having to commute to a central distribution point to collect the allowance,” said Peter Kessler, UNHCR’s representative in Moldova.

“Refugees have often suffered indignities and find it difficult to integrate in a new, safe host country,” he added. “Having these cards is another step towards helping them more actively participate in daily life and maintain a greater degree of dignity.”

The sums being distributed to beneficiaries of the UNHCR initiative are modest, currently not more than 500-600 Moldovan leu (30-36 euros) per person each month. Experienced aid workers -- including staff of the Ministry of Interior’s Refugee Directorate, UNHCR and its implementing partners -- meet regularly to review applications for assistance.

Recipients of the cards were pleased to get bankomat access and avoid having to pay for city buses to go and collect their monthly support.

Asylum-seekers only receive social support for six months under the UN scheme while they await their decisions. However, refugees and beneficiaries of humanitarian protection may be assisted for longer periods if they are sick, are persons with disabilities or are elderly or unemployed. One of the most important benefits is that the debit cards will also give the recipients access to bank accounts, where they may eventually save money and earn interest.

The UNCHR initiative was unrelated to either of two similar separate MasterCard-sponsored aid programs.

The first, a June 2016 partnership between the credit card company, the Serbian Ministry of Labor, and the humanitarian group the Mercy Corps, sought to provide prepaid debit cards to refugees to help meet basic needs:

The global organization Mercy Corps launched the pilot program in partnership with MasterCard and the Serbian Ministry of Labor to distribute prepaid debit cards to eligible refugees traveling through Serbia. Families received cards with a value of about $235 (210 Euros), and individuals approximately $78 (70 Euros). The money could be used to make purchases that help meet immediate needs. It was the first such program in the region to use an international cashless payment mechanism to help the tens of thousands of refugees and migrants seeking haven in Europe.

By leveraging our technologies and products such as MasterCard Aid Network and Prepaid, MasterCard collaborates with partners to provide essential services at the most critical times of refugees’ lives. To date, MasterCard Aid and Prepaid cards have been deployed in humanitarian responses across Africa, Asia and Europe – in countries such as Turkey, Kenya, Yemen, Nepal, Ethiopia, Nigeria, Niger, the Philippines, and Greece – and are on-track to support thousands of beneficiaries ... we are working with Mercy Corps to provide assistance to thousands of refugees in Europe to cover their basic needs and allow them to live with dignity during one of most difficult times in their lives.

A separate partnership between MasterCard and Soros to launch a "standalone entity," Humanity Ventures, was first announced in January 2017. That program sought to provide private sector solutions to social issues such as joblessness, lack of access to healthcare, inadequate education, and financial exclusion among migrants and their host communities:

Operating as a standalone entity, Humanity Ventures would initially combine solutions designed to expand access to healthcare and education, foster local economic development and entrepreneurship, and enhance the delivery of aid. One such solution is the Mastercard Aid Network, an award winning digital voucher platform designed in partnership with humanitarian organizations.

With the creation of Humanity Ventures, Soros could invest up to $50 million to make these solutions even more scalable and sustainable. The social enterprise could also serve as an incubator and accelerator for smaller projects committed to mitigating the migration crisis.

Designed to combine the need for business returns with social impact, Humanity Ventures would also act as a new model for how civil society, governments, and the private sector improve quality of life and drive economic growth.

“Migrants are often forced into lives of despair in their host communities because they cannot gain access to financial, healthcare and government services. Our potential investment in this social enterprise, coupled with Mastercard’s ability to create products that serve vulnerable communities, can show how private capital can play a constructive role in solving social problems,” said George Soros. “Humanity Ventures is intended to be profitable so as to stimulate involvement from other businesspeople. We also hope to establish standards of practice to ensure that investments are not exploitative of the vulnerable communities we intend to serve.”