"System for converting television commercials into interactive networked video games" doesn't quite capture the strangeness of the invention.

Claim:
Sony owns a patent for an interactive commercial system that allows viewers to skip commercials by yelling the brand name of the advertiser at their television or monitor.
Rating:

Yelling "McDonalds!" to end a television commercial for the fast-food restaurant is just one example of many "interactive commercials" contained within this patent.

On Jan. 9, 2023, a Twitter user tweeted that "Sony owns a patent that would force viewers to exclaim the brand name during commercials [in order] to end them." The tweet, which went viral, was accompanied by a "meme-worthy" patent illustration:

Snopes readers asked us if this was a genuine patent truly owned by Sony and if its purpose is accurately described in the viral tweet. In short, the answer to both questions is yes.

More broadly, the patent — tracked down by TechRadar editor Lance Ulanoff — describes a "system for converting television commercials into interactive networked video games." The verbal commercial-ender is just one of several advertising solutions outlined in the patent. The patent is, indeed, owned by Sony.

The viral image comes from Figure 9 in this patent. The interpretation of the comic matches the technical notes for this figure: 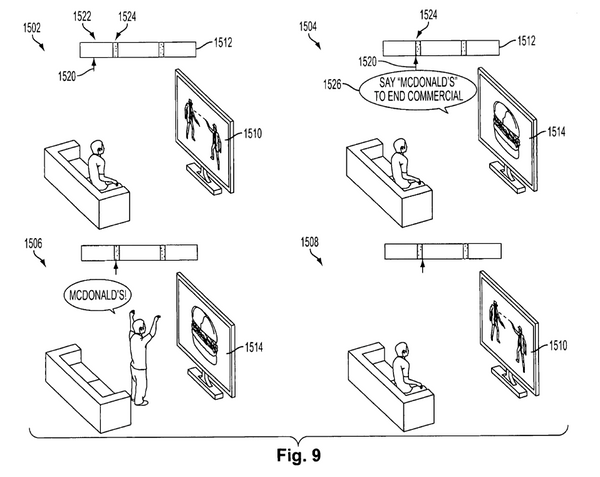 In [the] first capture of the sequence, a user is watching [a] movie. Progress pointer in progress bar shows that [the] content display corresponds to a movie and that [a] break is approaching.

On second capture, progress pointer shows that the movie has progressed to break for placing the IC [Interactive Commercial]. IC is interactive and instructions from the display ask the user to 'Say "McDonalds" to end [the] commercial.'

On third capture, the user is saying "McDonalds!" The client device includes a microphone that captures the user's words and voice recognition on the device [that] determines that the user has responded.

The system then proceeds to skip the rest of the commercial, as shown on fourth capture, where the user goes back to watch the movie.

What's the point? The patent provides one example of a motivation for both advertiser and viewer:

In one embodiment, the user gets rewarded with some points or a coupon from the sponsor [for shouting out the brand]. The rewards can be collected by the user in a variety of ways, such as receiving a coupon in the mail or via email, getting a text message in a mobile phone with the coupon, collecting points toward collecting [prizes] in a web site, etc.

This, it bears highlighting, is not the only McDonald's-based interactive commercial technology described in the Sony patent. Figure 8 describes a scenario in which a viewer could "speed up" a commercial by "throwing a pickle" into a burger: 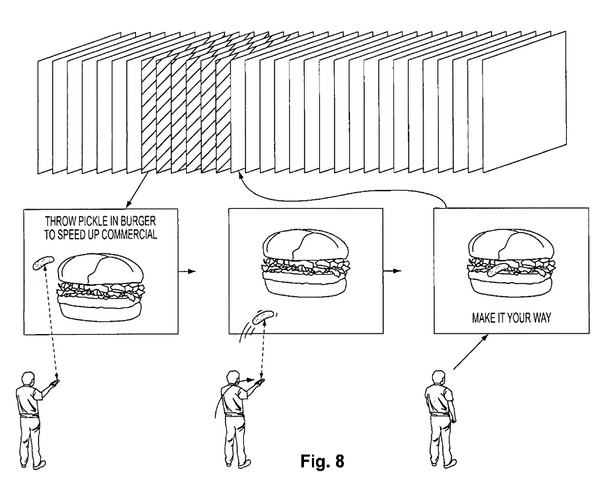 In the embodiment of FIG. 8, the instructions are "Throw the pickle to speed up commercial." The user, which is holding a one-handed controller with motion detection, swings his arm to simulate the act of throwing a pickle. As a result, the flying interactive pickle is placed in the burger, and the commercial message "Make it your way" is displayed briefly before the commercial ends and the user returns to watching the streaming media.

Because this is a genuine patent owned by Sony that describes a system for skipping commercials that involves yelling brand names out loud, the claim is "True."

Lance Ulanoff. "Sony Patent Would Have You Yell at Your TV to Skip Commercials." TechRadar, 11 Jan. 2023, https://www.techradar.com/news/sony-patent-would-have-you-yell-at-your-tv-to-skip-commercials.