'Sliders' furtively sneak into cars to steal purses while their owners are busy pumping gas. 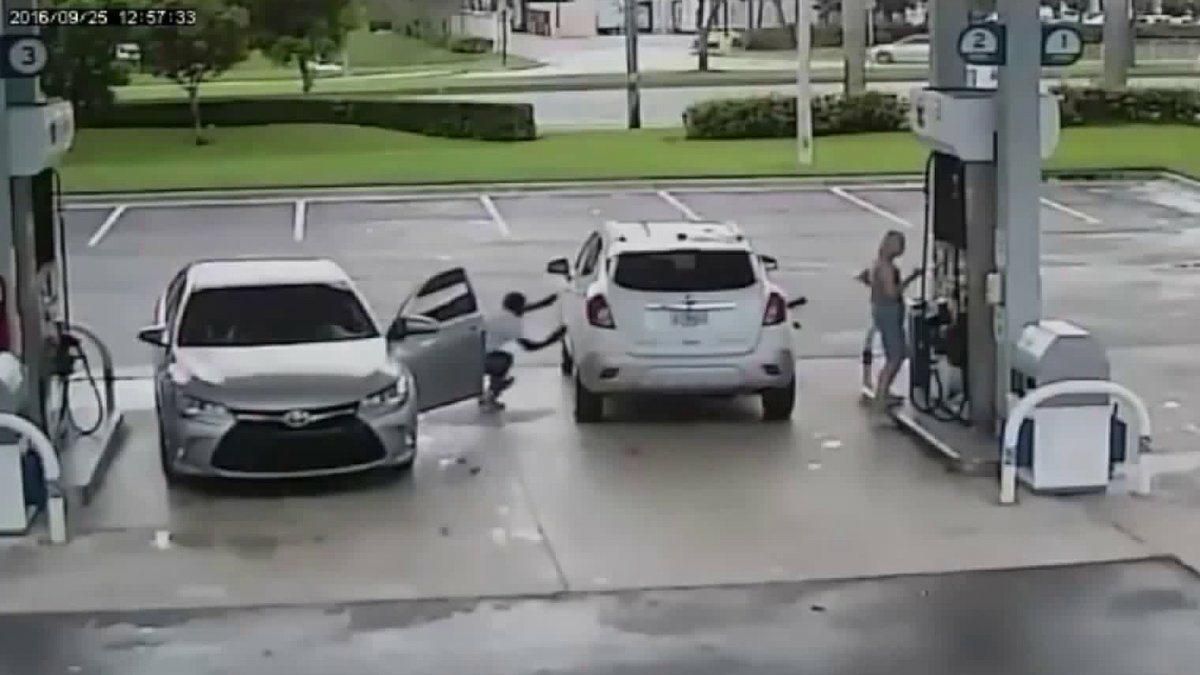 Is the below rumor real or fake?

Women across the country are being warned to be on the lookout for a new type of theft which is becoming increasingly popular at gas stations. The thieves have been tagged ‘sliders’ and their crime is to brazenly steal bags from vehicles while the driver is preoccupied with either pumping gas or paying for it.

Women in particular are vulnerable because many typically leave their bags or purses unprotected on the front seat with the door unlocked and the window down.

Purse-snatching is an old and common form of theft perpetrated by crooks looking to make small but quick scores. Most women's purses hold some combination of money, credit cards, jewelry, and other items that can be potentially converted into quick cash, and although the amount of loot garnered from a typical purse-grab may not be large, it's generally a good bet the snatcher will come away with something of value (and occasionally haul in a relatively big take by happening upon a victim who is carrying a good deal of cash or expensive jewelry).

Purse-snatching is typically a crime of opportunity, with thieves taking their victims as they find them, and generally it's the most desperate of crooks who resort to the stereotypical scheme of running up to a woman on the street, pulling her purse from her arm, and dashing away with. That form of thievery attracts attention, risks identification, and invites pursuit, so habitual snatchers often employ more subtle methods of spiriting away women's bags.

A crook's preferred approach is not to brazenly grab a victim's purse away from her while she is carrying it, but to wait until she has put it down somewhere and then furtively make off with it after she has left it unattended or her attention is temporarily directed elsewhere. It's not uncommon for women to set their purses on adjacent seats (or the floor) while traveling on buses and trains or while sitting in public areas such as movie theaters and airport terminals, put them in shopping carts, or leave them on car seats while they are driving and parking. Unfortunately, it can take only a moment's diversion on the purse owner's part — turning to talk to someone sitting in an adjacent seat, wandering a short distance away from a shopping cart to grab something off a shelf, walking a few steps to shut a car door or trunk — to provide an attentive thief with an opportunity to snatch a bag and hustle out of sight before the owner realizes it's gone.

Perpetrators of one particular manner of stealing purses are commonly known as "sliders" due to the form of opportunity they favor: pulling up their vehicle side-by-side with another car at a gas station, then "sliding" out of the driver's side door (i.e., staying low so that they cannot be seen by someone standing on the other side of the targeted car) to open the passenger's side door or reach through a window of the adjacent vehicle and grab a purse that has been left unattended on a seat while its owner is busy pumping gas:

Police are warning drivers, especially women, of this new kind of theft happening at gas stations around the US.

It's a crime of opportunity and distraction.

Sliders are mostly purse thieves. They watch for a woman filling up the gas tank of her car. They pull into the station, as if getting gas themselves. Then, a slider will open the door (or reach in the open window) of the adjacent car and snatch the purse or any other valuables in the front seat, and drive off while the driver is still busy on the other side of the car pumping gas.

"It's 'sliding' because they're sliding below the eye level of the door," Houston police officer Jim Woods said.

"They're not looking for a confrontation. They just want your property because they know that it's left abandoned and you're not paying attention," says Woods.

Woods says crooks hit all parts of town, watching for women who leave their purses on the passenger seat, doors unlocked and are distracted. Police say what these crooks are really looking for is a common mistake. And that's thinking, "I'm standing next to my car, so no one would be crazy enough to try to break into my car when I'm standing right next to it."

Sliding isn't really a "new" form of theft (stealing bags out of cars at gas stations has long been a common form of crime, of which "sliding" is just a minor variant), and we haven't encountered evidence documenting that it's the most prevalent form of purse-snatching or that it has been occurring with increasing frequency of late, but it is a scheme that can be easily thwarted through some simple precautions: