Did 'The Simpsons' Predict a Donald Trump Presidency?

Images from the 'The Simpsons' showing Donald Trump's announcement of his presidential candidacy are from 2015, not 2000. 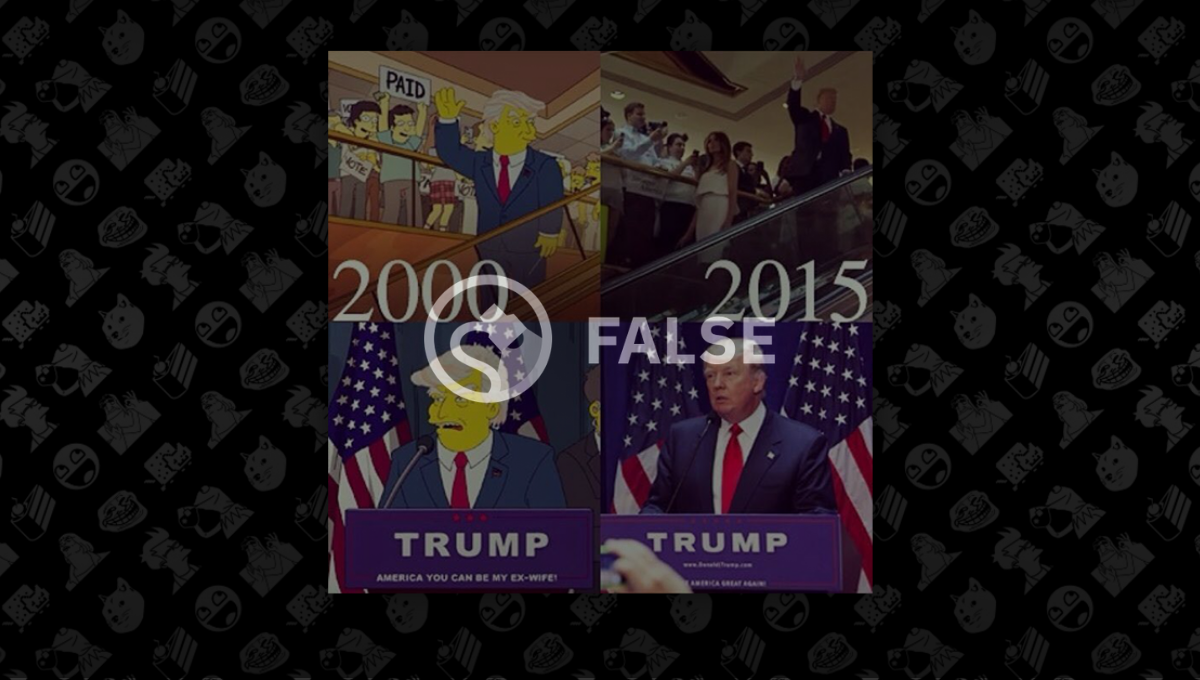 Claim:
A video documents that The Simpsons anticipated in 2000 how Donald Trump would announce his presidential candidacy in 2015.
Rating:

In August 2015, a video claiming that episodes of the Fox animated series The Simpsons had made some eerily accurate predictions about future events began circulating via social media. Most notable among those predictions was a clip purportedly taken from a 2000 episode that showed business magnate Donald Trump announcing his candidacy for President of the United States:

While the above-displayed video touches on a wide variety of Simpsons related conspiracy theories, the main issue was highlighted in September 2015 with a photograph — one that not only documented that The Simpsons had depicted Donald Trump running for President back in 2000, but that they did so by showing him in a setting and pose (riding an escalator while waving to supporters and onlookers) identical to one he would assume fifteen years later: The images from The Simpsons shown on the left-hand side of the above-displayed graphic did not originate in 2000, however. They were taken from a short video entitled "Trumpastic Voyage," which was posted to the "Animation Domination" YouTube channel page on 7 July 2015, after Trump had announced that he would be seeking the Republican presidential nomination for 2016:

The animated series did feature a joke about Donald Trump's becoming president in a 2000 episode entitled "Bart to the Future," but since Trump had been flirting with the idea of making a presidential run since at least as far back as 1999, such a "prediction" wasn't as prescient as it might seem in retrospect:

Another Simpsons -related prediction theory was floated on 9 November 2016, a day after Trump won the presidential election, holding that the show had correctly predicted the 2016 electoral vote map: This screenshot of Mr. Burns and a dog kneeling in front of an electoral map is real, but it has little to do with Donald Trump — it was taken from a 2012 clip in which the greedy billionaire of Springfield endorsed Republican candidate Mitt Romney:

Furthermore, this Simpsons screenshot is being compared to an electoral map that does not match the genuine map of the 2016 presidential election. When the screenshot is compared to the real 2016 electoral map, it's clear they are not identical. For instance, The Simpsons "predicted" that Wisconsin, Ohio, and Pennsylvania would be blue (these were all red states), and that Virginia would be red (a blue state) in 2016: