This would not be the first time the actor had participated in Inauguration Day presentations. 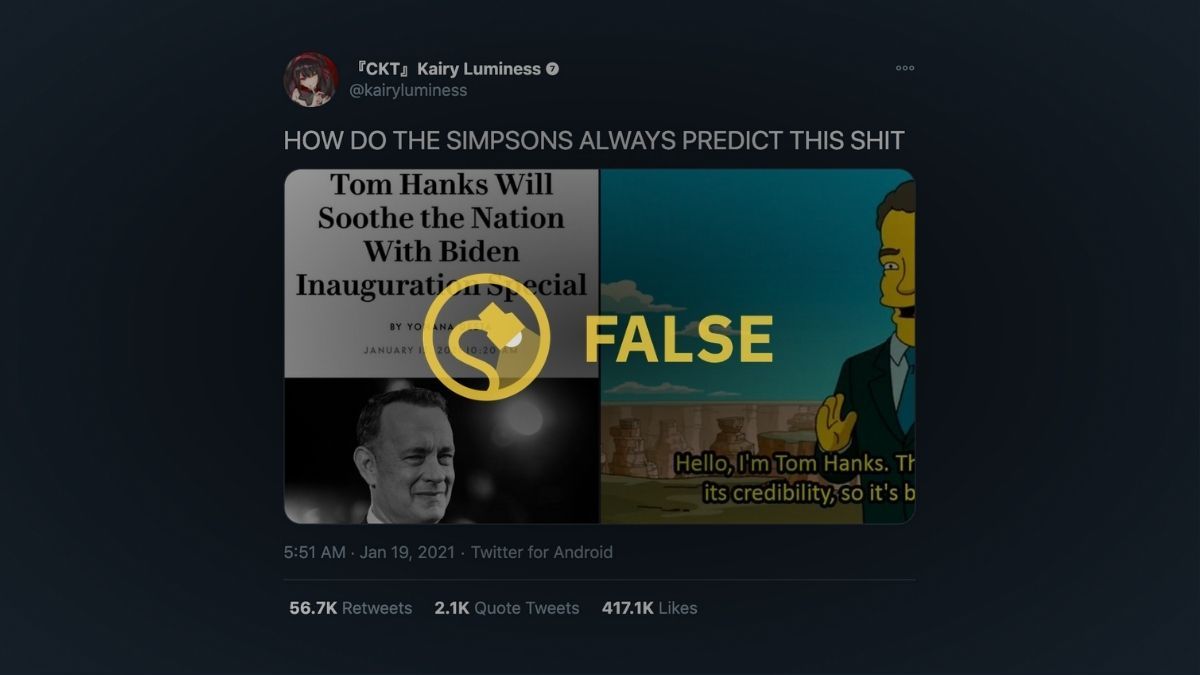 Claim:
"The Simpsons" predicted that Tom Hanks would host a television special on Inauguration Day in 2021.
Rating:

On Jan. 19, 2021, Twitter user @kairyluminess tweeted a comparison of two pictures. The first was a screenshot of a Vanity Fair headline that said: "Tom Hanks Will Soothe the Nation with Biden Inauguration Special." The second picture was a frame from the 2007 feature film, "The Simpsons Movie."

The two images purportedly proved that "The Simpsons" predicted Hanks would participate in an Inauguration Day special on Jan. 20, 2021: As we reported many times in the past about other purported predictions by the classic animated series, "The Simpsons" did not predict that.

It's true, as the image in the left side of the meme says, that Hanks was scheduled to host a television special on the evening of Joe Biden's Inauguration Day, called "Celebrating America."

The screenshot on the right in the meme, meanwhile, showed a scene from "The Simpsons Movie" that contained a line from Hanks saying: "Hello. I'm Tom Hanks. The U.S. government has lost its credibility, so it's borrowing some of mine." He spoke in the scene about "the new Grand Canyon."

However, the two pictures in the tweet were unrelated. Among other things, the scene in the movie made no mention of an inauguration. Also, such a loose and hastily glued-together "prediction" would mean that "The Simpsons" also "predicted" hundreds or thousands of other things, which the show did not.

We should note that Hanks previously participated in an Inauguration Day event in 2009, two years after the movie came out. MTV.com reported at the time that he "paid tribute to Abraham Lincoln." The moment can be watched on YouTube:

The Biden Inaugural website announced that "Celebrating America" would air on the evening of Inauguration Day:

"Celebrating America" will be hosted by Tom Hanks on January 20 from 8:30-10:00 p/m. ET/PT and will showcase the American people's resilience, heroism, and unified commitment to coming together as a nation to heal and rebuild. The program will feature remarks from President-elect Biden and Vice President-elect Harris and include remarks, performances that represent the rich diversity and extensive talent America offers, and the American heroes who are helping their fellow Americans through this crisis.

The program will be carried live by ABC, CBS, CNN, NBC, MSNBC, and PBS. It will be streamed live on PIC social media channels: YouTube, Facebook, Twitter, and Twitch. The PIC’s streaming partners, including Amazon Prime Video, Microsoft Bing, NewsNOW from Fox, and AT&T U-verse (Channel 212/1212 in SD/HD) and DIRECTV (Channel 201).