Did 'The Simpsons' Predict Kamala Harris Would Be VP?

The idea that the TV show has predicted major world events is a common internet trope. 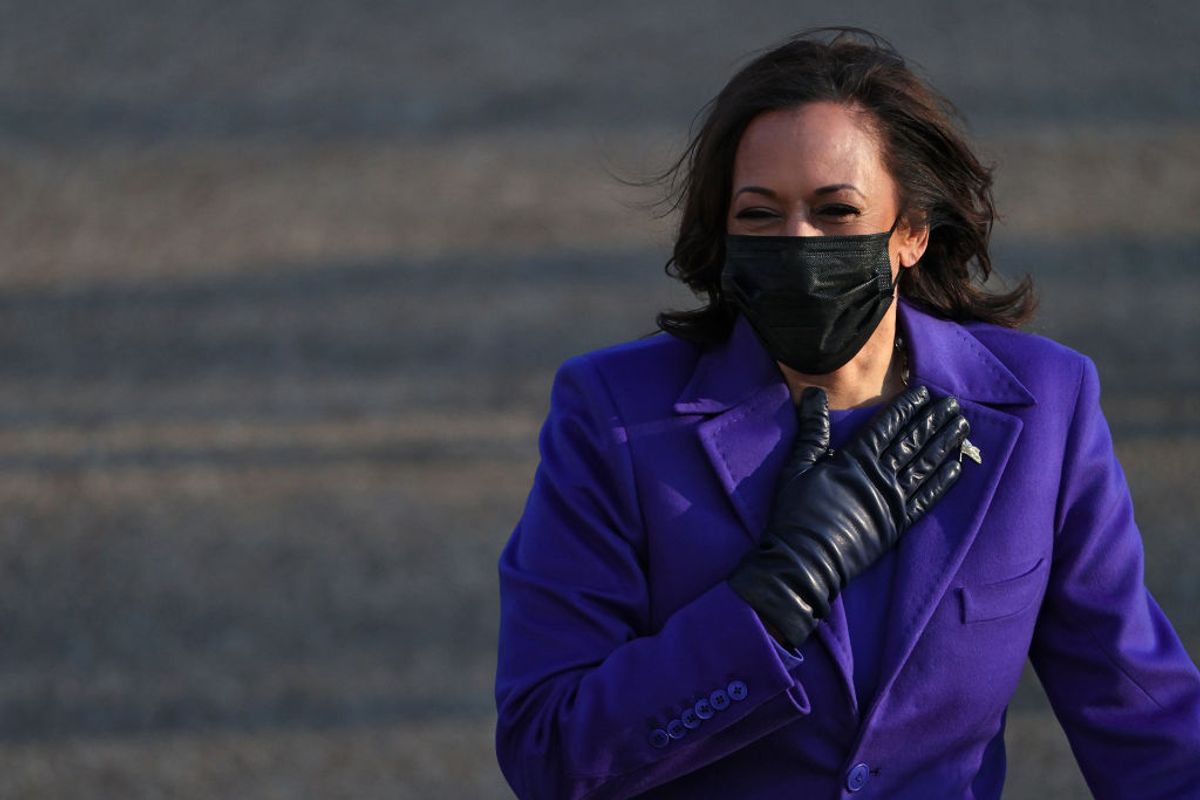 Claim:
The long-running animated sitcom "The Simpsons" predicted Kamala Harris would be elected vice president of the United States.
Rating:

On Jan. 20, 2021, social media users posted images that they said seemed to show that the animated television sitcom "The Simpsons" had predicted the U.S. vice presidency of Kamala Harris, who was inaugurated that day along with U.S. President Joe Biden.

Some pointed to the episode "Bart to the Future," which originally aired in March 2000 and showed character Lisa Simpson succeeding Donald Trump as president. In the episode, Lisa wears a purple suit, which some said echoed Harris' purple ensemble as she was sworn in, as illustrated in this tweet:

The idea that "The Simpsons" has predicted the future is a frequently recurring theme. In the past, social media users have speculated that the show predicted major news events like Donald Trump's presidency and the death of George Floyd, a Black man who was killed in Minneapolis police custody in May 2020, sparking months of massive, nationwide civil rights demonstrations.

As we previously reported, these claims are sometimes based on falsified images that don't represent what actually happened in the show, or they are framed in a misleading way. For example, a previous meme claimed that a still image showing Trump descending the escalator at Trump Tower when he kicked off his campaign in 2015 was aired on the show in 2000, when it was in fact taken from a short video that was posted to YouTube after the kickoff event had already occurred.

"The Simpsons" has produced hundreds of episodes over 32 seasons, so in all that time, it seems likely that the show would portray events that appear to parallel real-world events. The "Bart to the Future" episode initially became famous 16 years after it first aired because it seemed to predict Trump's presidency.

But Trump had flirted publicly with the idea of running for president since at least 1999, and in 2000, the year the episode aired, he did run unsuccessfully as a third-party candidate. He has also been an omnipresent fixture in American pop culture for decades.

"Simpsons" writer Dan Greaney said the line in "Bart to the Future" in which Lisa Simpson states she inherited "quite a budget crunch from President Trump" was intended to add to the episode's dystopian vision of the future.

"It was a warning to America," Greaney told The Hollywood Reporter in March 2016. "And that just seemed like the logical last stop before hitting bottom. It was pitched because it was consistent with the vision of America going insane."

Although the reference to Trump may have been based on real-world events that gave the episode the appearance of prescience, the supposed Harris prediction is an even greater stretch. Harris didn't run for public office until 2003, three years after the episode aired, when she became San Francisco district attorney. The episode never mentions her.

The appearance of Lisa Simpson in a purple suit appears to be a coincidence and could probably stand in for any woman who might potentially win the presidency or vice presidency and also at some point wore purple.