Did California Man Find Shrimp Tails in His Cereal Box?

The same person also shared photos that appeared to show various other contaminants in the same box of Cinnamon Toast Crunch. 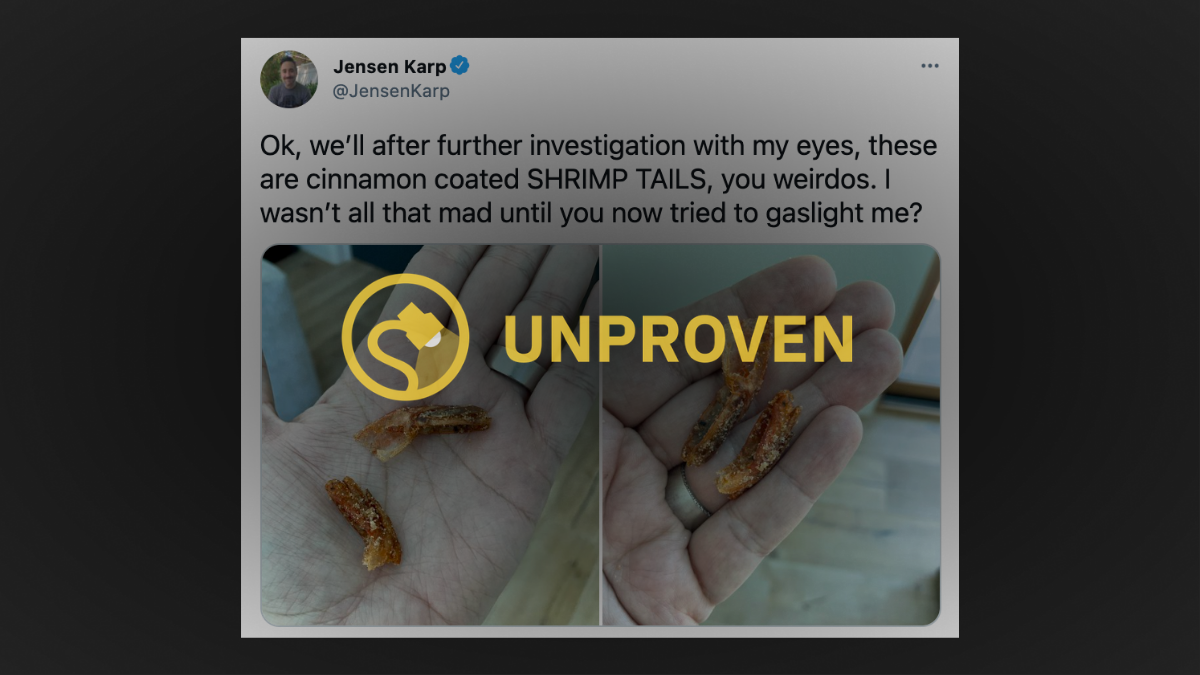 Though photographs show objects that resemble shrimp tails coated in sugar, the cereal producer insisted there was no possibility of contamination. A crustacean researcher is conducting a DNA test on the objects, according to the man who found them. We will update when we know more.

A Los Angeles-based comedian named Jensen Karp went viral on Twitter in late-March 2021 when he shared pictures that appeared to show shrimp tails in his Cinnamon Toast Crunch Cereal.

In an email to Snopes, Karp confirmed that he had purchased the box of cereal the morning of March 20, 2021, at a Costco in Woodland Hills, California. It was only after he dumped the cereal in the bowl that he noticed what looked to be “shrimp tails” both in the bowl and a second that was in the box. (For reference, the bar code was 1600 43632 and the expiration date listed was for Jan. 25, 2022.)

Snopes contacted General Mills, who produces Cinnamon Toast Crunch, but did not receive a response at the time of publication. However, the cereal company posted the below statement to their Twitter on March 22, 2021:

“It’s the least plausible thing in the world,” Karp told Snopes in an email.

“In the shrimp tails (which by the way, they are sugar-coated like the cereal) box, there was a small piece of string, a sugar-coated pea type of thing, and a lot of the squares have a black item cooked onto them,” Karp told Snopes. “The black items are also at the bottom of the bag. Some of the squares also have small red dye on them. In the other bag, it appears taped up? And that has a used piece of dental floss.”

In screenshots of a conversation between himself and CTC that were shared on Twitter, Karp pointed out that the cereal company asked him to send the boxes so that they could test the product but he refused to do so.

The shrimp saga racked up quite the following on Twitter as Karp live-tweeted the events as they unfolded.

Adam Wall, a crustacean researcher at the Natural History Museum in Los Angeles (NHMLA), wrote in a Tweet that the pieces in question did “look a bit like a shrimp’s telson and uropods” and that he planned to analyze the specimen under a microscope to confirm if it was, indeed, a shrimp tail. Wall is doing this work in his own time and not in an official capacity as an NHMLA employee. He told Snopes that he can only determine whether the specimens in question are “shrimp” or “accumulations of cinnamon and sugar.”

“I can say nothing about packaging [or] how the specimens did or didn't make it into the bags,” he told Snopes. “From Karp's photos it is very hard to tell, so I need to see them in person and get them under a microscope.”

Zymo Research, a biotechnology company based in California, offered to provide the DNA extraction kit and technical support for the cost of sequencing the alleged shrimp tails, including determining more information about possible species.

“If the specimens do indeed prove to be shrimp, I will be working with a team of researchers to extract DNA for sequencing,” said Wall. “We will then be using a molecular method of identification called DNA barcoding to attempt to identify what species of shrimp the fragments might be from. But that only comes into play if they are not just ‘accumulations of cinnamon and sugar.’”

Karp also noted that neither he nor the cereal company knew how the contaminants got into the cereal boxes, and that it could have happened at the Costco store where he bought the cereal. (Though that wouldn’t necessarily explain the black “stuff” cooked into the sugar coating nor the sugar coating on the shrimp, he added.) Snopes contacted Wall, and will update the article with any scientific evidence that proves whether or not the specimens in question are shrimp.

Other social media users pointed out that shrimp is an allergen, and contamination with other cereal could prove harmful and Karp said that it is a “massive bummer” that anyone would not take the incident seriously. The U.S. Food and Drug Administration (FDA) regulates safety programs for all fish and fishery products under the provisions of the Federal Food, Drug, and Cosmetic Act.

“Food allergies are a significant public health concern. Allergic reactions vary in severity from gastrointestinal disturbances and skin irritation, to anaphylaxis, shock, and death,” wrote the agency in its controls guide. “Consumers with allergies must avoid food containing allergenic materials to avoid these reactions. Because of this, consumers rely on food labels to disclose the presence of allergenic ingredients.”

And one of those allergens that require special highlighting under the Food Allergen Labeling and Consumer Protection Act of 2004 are crustacean shellfish like shrimp.

It's not the first time that General Mills has had a go with allegations of shrimp-tainted food. In 2011, the Golden Valley-based food manufacturer sued a Michigan blueberry packer over a shipment of blueberries that it said was tainted with shrimp.

We will update this article as further information becomes available.

Update [March 24, 2021]: This article was updated to include comments from crustacean expert Adam Wall.