Was Arnold Schwarzenegger Forced to Sleep Outside a Hotel He Had Helped Open?

That's gratitude for you! 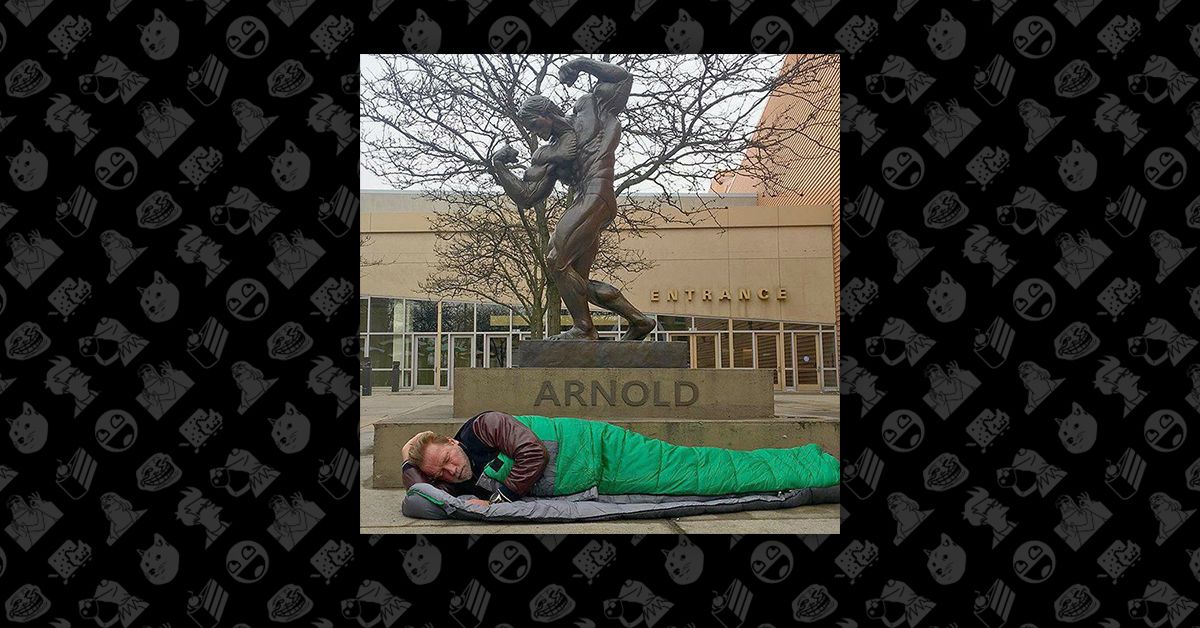 Claim:
Arnold Schwarzenegger slept in a sleeping bag outside a hotel he had once opened, because staff refused to give him a free room.
Rating:

Social media users love to share words of inspiration and wisdom — if you can pair a profound (or at least vague) life lesson with a striking photo of a celebrity, all the better.

That was the case in early 2018, when a photograph of California's former governor Arnold Schwarzenegger appeared along with an elaborate, but false, back story. A photograph of Schwarzenegger in a sleeping bag in front of a statue of himself bore the following caption:

Famed actor Arnold Schwarzenegger posted a photo of himself sleeping on the street under his famous bronze statue, and sadly wrote "How times have changed"...

The reason he wrote the phrase was not only because he was old, but because when he was governor of California he inaugurated a hotel with his statue. Hotel staff told Arnold, "at any moment you can come and have a room reserved for you." when Arnold stepped down as governor and went to the hotel, the administration refused to give him a room arguing that he should pay for it, since they were in great demand.

He brought a sleeping bag and stood underneath the statue and explained what he wanted to convey: "When I was in an important position, they always complimented me, and when I lost this position, they forgot about me and did not keep their promise. Do not trust your position or the amount of money you have, nor your power, nor your intelligence, it will not last. "

Trying to teach everyone that when you're "Important" in the people's eyes , everyone is your "Friend " But once you don't benefit their interests , you won't matter.

" You are not always who you think you will always be, nothing lasts forever." The story is riddled with falsehoods, and its primary claim — that Schwarzenegger slept outside a hotel after being refused a free room— is a fabrication.

In reality, the photograph (which is legitimate) was taken in January 2016, while the Hollywood star was shooting a film in Columbus, Ohio. Schwarzenegger posted it to his Instagram account on 15 January 2016, apparently as a joke: The statue is located outside the city's convention center and has never been situated in front of a hotel, despite the false claims in the Facebook post.

Schwarzenegger first helped unveil the statue in 2012, outside the Franklin County Veterans Memorial, and then took part in its rededication in 2014, after it was moved to its current location. The former bodybuilder has longstanding ties to Columbus, which is host to an annual bodybuilding competition called the Arnold Sports Festival.