Did Schwarzenegger and President Bush Sled into Barbara Bush, Breaking Her Leg?

Get her to da choppa! 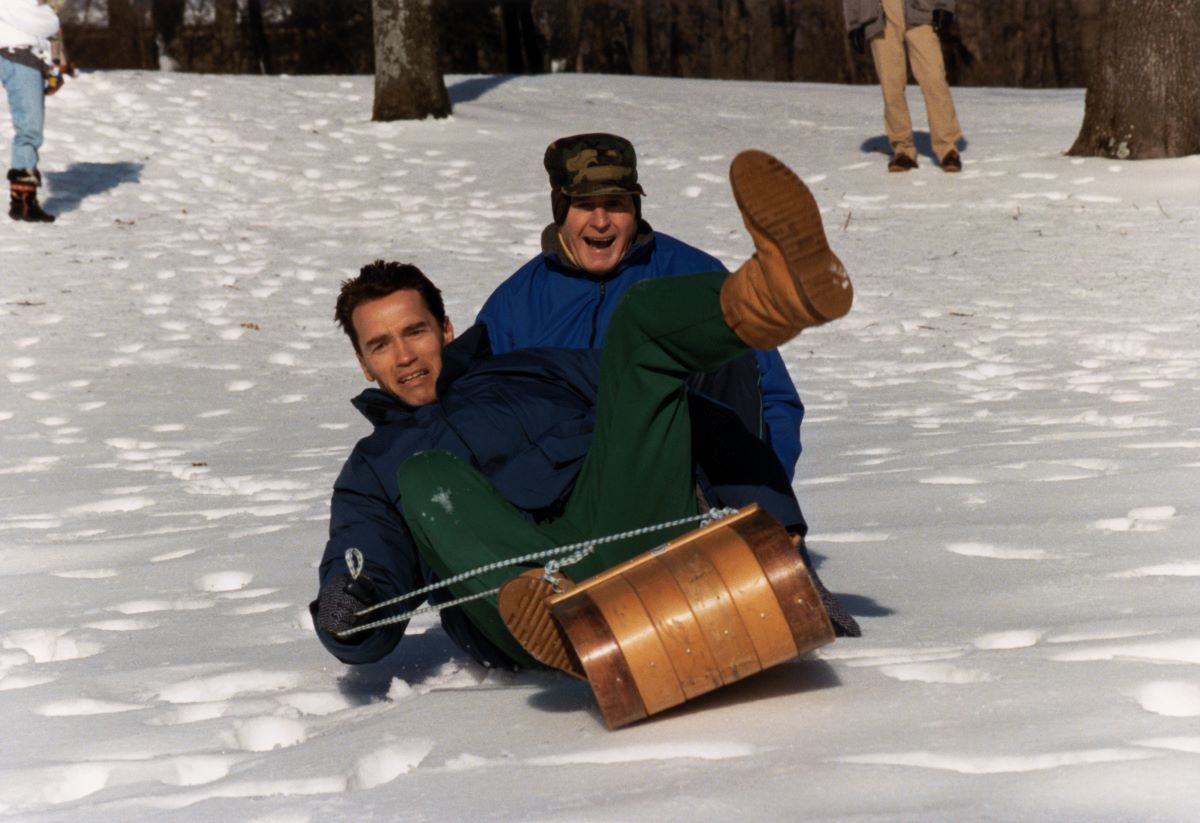 A photograph of Arnold Schwarzenegger and President George H.W. Bush careening down a hill on a snow sled is real. It's also true that former first lady Barbara Bush broke her leg during this snow trip.

Barbara Bush broke her leg crashing into a tree, not because Schwarzenegger crashed into her.

A photograph supposedly showing actor and former California Gov. Arnold Schwarzenegger and former President George H.W. Bush careening down a hill on a sled is frequently shared on social media. In February 2021, a version of this image was shared to Reddit along with a piece of text claiming that this sledding trip resulted in a crash that broke former first lady Barbara Bush's leg: This is a genuine photograph of Schwarzenegger and Bush sledding down a hill together at Camp David on a toboggan in 1991. It's also true that Barbara Bush broke her leg on this trip. However, the claim that Schwarzenegger was responsible for breaking Barbara Bush's leg appears to be based on a misstatement by the former governor.

The version of the story presented in the above-displayed meme comes from Schwarzenegger himself. In 2018, while appearing on CNN's "State of the Union," he relayed the story to Jake Tapper.

It was snowing up there, and we had this toboggan, and [Bush] was trying to teach me how to slide that because I was only used to sledding down with Austrian sleds, which you direct kind of with your feet. And so we went down totally out of control, and of course, we crashed into Barbara Bush, who broke her leg then after that. So that’s why he sent me this picture.

The version of the picture Bush sent to Schwarzenegger is accompanied by a caption, reading: "Turn, damn it. Turn!"

While we do not doubt that the moment captured in the above-displayed picture ended in some sort of crash, it doesn't seem as if this specific sledding mishap resulted in Barbara Bush's broken leg. It looks like Schwarzenegger either misspoke while telling this story or that his statement was misinterpreted. (He says that the first lady "broke her leg then after that," which is a bit ambiguous.)

Regardless, it is true that Barbara Bush broke her leg during this trip.

In news reports from 1991, it was reported that Barbara Bush broke a bone in her leg after she crashed into a tree while sledding at Camp David. 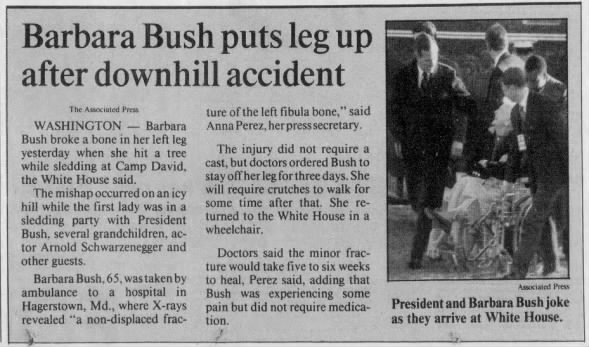 The first lady's Press Secretary Anna Perez said that Barbara Bush was sledding down a hill on an inflated inner tube when she lost control. Perez added that it was unclear why Barbara Bush, 65-years-old, did not bailout:

Mrs. Bush was smiling as she emerged from the helicopter that brought her and the President back to the White House at 4 P.M. A blanket was wrapped around her waist before she got into a wheelchair.

President Bush reportedly joked at the time that there was "no damage to the tree."