Does This Photograph of a Marine Saluting the U.S. Flag Violate Twitter's Rules?

Despite claims that an image of a marine saluting an American flag was deemed offensive by Twitter, we found no evidence that it violated the company's rules. 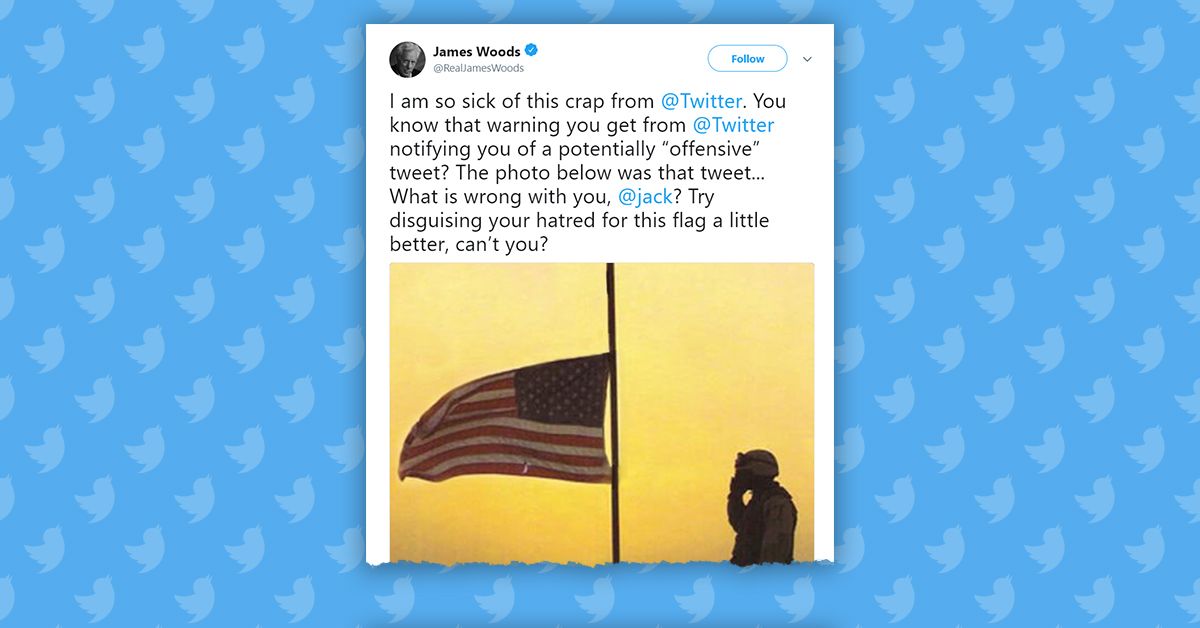 Claim:
A photograph of a marine saluting a U.S. flag violates Twitter's rules and policies.
Rating:

On 3 April 2003, Master Sgt. James E. Valrie saluted a United States flag flying over a desert airfield in southern Iraq at sunset. A photograph of the moment was captured by his wife, Marine Sgt. Tisha Carter-Valrie:

I had two failed marriages before I met James. I thought I was destined to be single. We met through a mutual friend who knew I was getting stationed in San Diego and suggested I contact him. We became the best of friends, crying on each other’s shoulders over other relationships, and eventually became romantically involved.

In January 2003, my parents made a trip to San Diego to see me one last time before I deployed to Iraq. They met James for the first time, and without any prior discussion, James looked at my father and told him he would like to marry me. I remember him saying, we don’t know what will happen once we get over there and he did not want to miss the opportunity to have me for his wife.

I was totally on the spot, but I said yes. We were married Jan. 25, 2003. Two days later, he left for Kuwait and I deployed shortly thereafter. He always used to joke that he gave me six months of all the sun and sand a girl could want on a honeymoon.

We were from different units, so we weren’t sent to the same places. After the war began, I was escorting media, and we flew into a desert airfield in southern Iraq. My husband’s unit was the base air traffic control unit. Coincidentally, it was my husband’s turn to take down the flag and perform the evening colors ceremony. I grabbed my camera and happened to catch the photo you see.

That photograph was later released by the U.S. Marine Corps has been widely shared online (often without attribution) in the ensuing years. It has been posted on numerous blogs, web sites, and social media pages, made into tattoos and postcards, and has even been included in multiple Memorial Day messages posted by the rock band KISS.

In July 2018, this patriotic and moving photograph became the subject of a small controversy when actor James Woods claimed that he had received a warning about "offensive" content from Twitter after he shared the image with his followers: We attempted to contact Woods about the warning he allegedly received but did not receive a response. It's possible that he truly did receive such a warning (he didn't state whether the image was accompanied by any text, which could have been the "offensive" portion of the tweet), but we're skeptical that the image alone raised any red flags with Twitter, for a number of reasons.

For starters, this isn't the first time this photograph has been shared on the social network. In fact, Woods himself previously used this image in 2015 to call for a boycott of PacSun after the clothing retailer was criticized for selling a t-shirt featuring an upside-down American flag: That 2015 tweet has resided on Woods' timeline for three years without issue. As of this writing, it is still available.

We searched Twitter for other instances of people sharing this photograph over the years and came up with numerous examples, including at least one case in which a user adopted the image as their profile pic, and a tweet from Lara Trump in May 2018.

If Twitter truly deemed the image "offensive," these posts would have likely been taken down. However, we've yet to come across any credible instances of the social network removing this photograph for violating its rules.

When we reached out to the company to find out why (or if) they had issued a warning to Woods after he allegedly posted the photograph, they told us that they couldn't comment on the activity of an individual account. They did say, however, that Twitter would never "take action on accounts or content that are not in violation of our rules."

So is the photograph in violation of Twitter's rules? The social network's guidelines are extensive, but we couldn't find any provisions under which images of national flags, soldiers, or patriotic activities would be deemed offensive.

Twitter's rules do cover topics such as copyright infringement, hateful conduct, spam, offensive content, and threats, but this photograph wouldn't appear to fall under any of those categories:

Hateful conduct policy
Freedom of expression means little if voices are silenced because people are afraid to speak up. We do not tolerate behavior that harasses, intimidates, or uses fear to silence another person’s voice. If you see something on Twitter that violates these rules, please report it to us.

Examples of what we do not tolerate includes, but is not limited to behavior that harasses individuals or groups of people with:

As it has been repeatedly shared on Twitter without issue for a number of years, it seems safe to say that this photograph of a marine saluting a flag does not violate the social network's terms of service.

Woods' claim that his posting of the image triggered an offensive content warning is reminiscent of a ploy used by troll Facebook pages to stir up anger over non-existent issues. One popular image of a little boy saluting a flag is frequently shared, for instance, as if its "hateful" content were being removed from Facebook (despite the fact that the "banned" image is included in the very posts claiming it has been removed): We investigated this rumor back in 2015 and found that it, too, was false.

It's possible that Woods received a warning message about "offensive" content after posting an image of a marine saluting a flag, but if so, it's likely that the warning had more to do with the accompanying text than the image itself. It's also possible that the warning Woods allegedly received was due to a Twitter user, not the social network itself, flagging the content for being inappropriate for some unexplained reason.

The original tweet Woods spoke of is not on his timeline (nor did we find any record of it in archives of Woods' page, nor in any mentions from his followers, further adding to our skepticism about the claim), and the actor did not provide specifics about the content of the tweet (other than the inclusion of a photograph). Therefore, we're unable to comment on which part of Woods' message could have been deemed "offensive."

We can say, however, that the photograph of Master Sgt. James E. Valrie saluting the United States flag is not itself in violation of Twitter's rules.

One final note on this viral photograph: The image shared by Woods (and so many others on Twitter) shows the flag at half-mast, but this is actually a doctored version of the original. Marine Sgt. Carter-Valrie, who took the photograph, told the Los Angeles Times in 2013 that although the image of her late husband (Master Sgt. Valrie passed away in 2009 after a battle with kidney cancer) was a wonderful tribute, she was dismayed at how the image had been manipulated over the years to serve various political purposes:

Unfortunately, with all the wonderful ways it has been used, the photograph has also been manipulated and in some cases used in ways I found disrespectful. On Memorial Day, the flag is sometimes moved to appear at half-staff.

People have flipped the photograph, I’m sure to make the flag fly in the other direction, but by doing that, it makes my husband look like he is saluting with the wrong hand. In one case, the flag was turned upside down and used on an antiwar site. It makes me so angry when I run across it being used in a manner that does anything less than pay tribute to our country’s service members.

This photograph has been a wonderful tribute -- kind of me and my family’s own private little tribute, as very few people knew the story behind it, that it was taken of a Marine, by a Marine, and they were married. I am honored when anyone wants to use it. But this photograph has such deep meaning to me, my children and James’ family, that it is often difficult to swallow when we see it abused.

Carter-Valrie provided a copy of the original photograph, as well as two subsequent snaps of her late husband as he lowered the flag in Iraq, to the Los Angeles Times: