Was a 'Sacrifice the Weak' Sign Shown at a COVID-19 'ReOpen Tennessee' Rally?

A person reportedly was seen holding up such a sign. 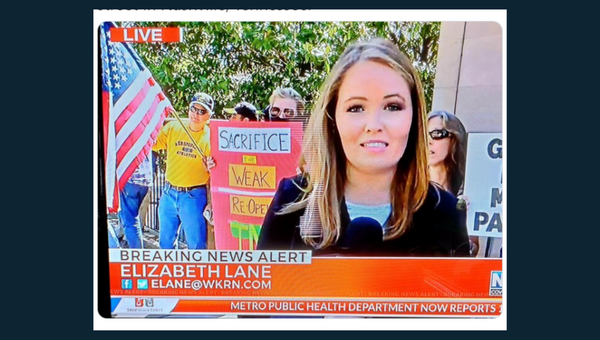 Claim:
A picture shows a person holding a "Sacrifice the Weak" sign at a rally urging the state of Tennessee to re-start its economy amid COVID-19 lockdown orders.
Rating:

In April 2020, an image supposedly showing a person holding a "Sacrifice the Weak" sign at an anti-COVID-19-lockdown rally in Tennessee went viral on social media: This is a genuine screenshot of a news broadcast from the anti-lockdown protest in Tennessee on April 20, 2020. The "Sacrifice the Weak" sign is real, although we can't say for certain whether this protester was holding this sign in earnest, or displaying it ironically as a way to mock these protests.

This screenshot comes from a WKRN broadcast featuring reporter Elizabeth Lane. Here's the full video of Lane's report. The "Sacrifice the Weak" sign can be seen around the 1:40 mark:

Lane said that she didn't notice the sign while reporting on the "ReOpen Rally" in Tennessee and only noticed the sign after it was brought to her attention on social media. Lane said that some people had asked if the protest sign was "satire" but said she did not have an answer:

This "Sacrifice the Weak" sign can also be seen in a broadcast from ABC News Channel 9.