Was a Russian Woman 'Embalmed Alive' with a 'Formalin Drip'?

A number of international news reports about a Russian woman who was "embalmed alive" sensationalized what appears to have been a tragic medical error. 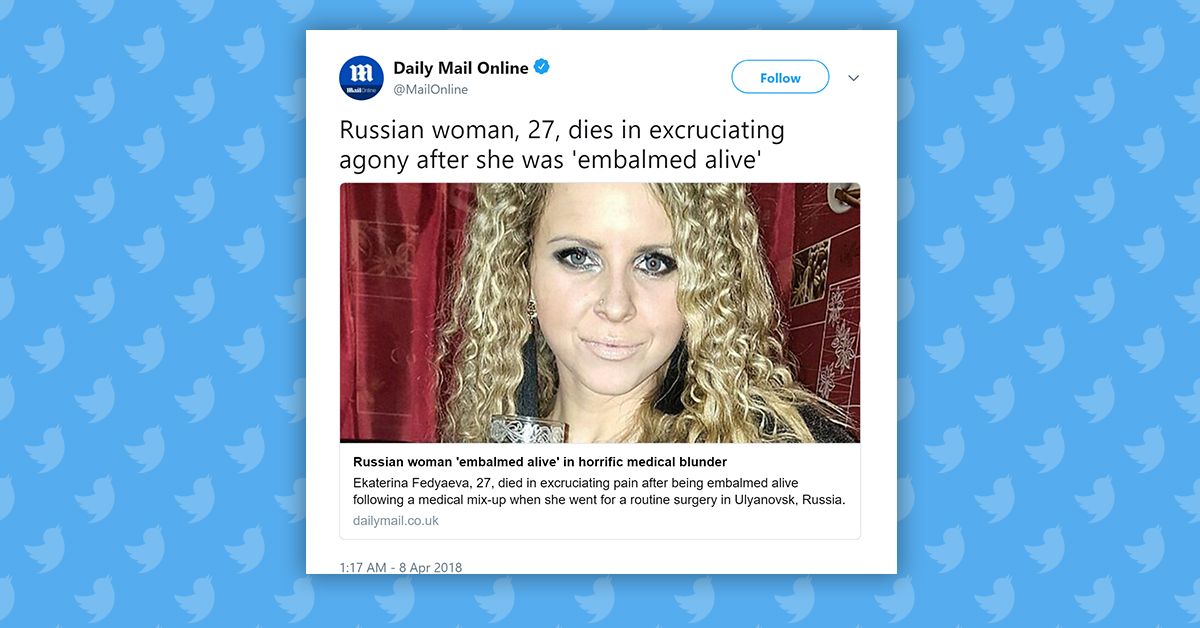 Claim:
A Russian woman was embalmed alive due to the intravenous administration of formalin.
Rating:

Ekaterina Fedyaeva died after a medical error resulted in her mistakenly being poisoned with formalin.

Fedyaeva was not given formalin intravenously and did not experience the functional equivalent of being "embalmed alive."

On 9 April 2018, a number of tabloid-like news reports suggested that a Russian woman had been "embalmed alive" after doctors mistakenly administered formalin intravenously instead of saline:

Russian woman 'embalmed alive' after being given solution with formaldehyde instead of saline drip https://t.co/ft8UNewMj7 pic.twitter.com/Gny5xg9Cbz

One of the first articles to appear reported that 28-year-old Ekaterina Fedyaeva had been "embalmed alive":

Ekaterina Fedyaeva's mother has accused medics of 'murder' after they put her daughter on a formalin drip - a solution contain formaldehyde - instead of saline.

She was given a drip normally infused into the veins of the dead to prevent decomposition.

Other news reports were light on details about the medical mishap, stating only that Fedyaeva had been given "formalin, a solution that contains formaldehyde — which is used to preserve dead bodies."

An article from the Russian news agency TACC (translated) clarified the chain of events, reporting that formalin had mistakenly been used instead of saline during a relatively routine removal of ovarian cysts:

On March 15 [2018], medical personnel mistakenly introduced formalin instead of saline into the abdominal cavity of a 28-year-old female patient during a routine operation.

After detecting what happened, doctors performed a [cleaning] of the abdominal cavity to remove the substance from the body. The next day, the woman was transferred to the Ulyanovsk Regional Clinical Hospital, then for the most effective course of treatment the patient was sent to the FGBU of the State Scientific Center of the All-Russian Medical Center named after A.I. Burnazyan FMBA of Russia. As previously reported, investigators of the regional SS of the Criminal Code initiated a criminal case of causing serious harm to human health through negligence as a result of improper performance by a person of their professional duties (Article 118 of the Criminal Code of the Russian Federation).

The routine surgery took place on 15 March 2018. Early local reports contradicted the repeated claim that Fedyaeva was placed on a "formalin drip," stating that an "unknown nurse" washed the surgical site with formalin instead of saline. Four days later, Fedyaeva was transported to Moscow where doctors worked to undo the damage caused by the administered formalin, but the patient succumbed to her injuries on 5 April 2018.

Ongoing accounts published by local news sources provide a relatively clear timeline. No formalin drip was substituted for saline, nor was the patient injected with formalin. Initial English-language reports claimed Fedyaeva had been "given a drip normally infused into the veins of the dead to prevent decomposition," suggesting that the medical mishap amounted to an accidental embalming, but according to morticians that was not even close to the case.

In an assessment of the claims, mortician Caleb Wilde wrote that a "slow, intravenous drip of formalin would have ripped apart the insides of Ekaterina Fedyaeva." Wilde repeated his skepticism that the story occurred in the manner reported, adding that "formalin has a potent smell ... that burns when you breathe it in ... whoever put formalin in the IV bag (and I don’t know the protocols for filling IV bags) were either without a sense of smell, extremely dense, or they did it on purpose":

This per the often unreliable tabloid The Sun, “Ekaterina Fedyaeva was said to be undergoing routine surgery at a hospital in Ulyanovsk, in the Volga Federal District of Russia, when the hospital provided her on a formalin drip, which contains formaldehyde and is used to prevent corpses from decomposing.”

I’m still hoping that this is some elaborate hoax. But it doesn’t seem to be. This is a once in a billion kind of mistake that could have only been made through a confluence of poorly designed and poorly practiced medical protocols.

Pure formalin is a much strong[er] solution that the embalming fluid we use on dead bodies.

Formaldehyde is a naturally occurring gas that is highly dissolvable in water. When it is dissolved in water, it’s called “formalin”, which is the liquid that was intravenously given to Ekaterina. Formalin is 40% formaldehyde.

With arterial fluid that is 2%, I can effectively harden and preserve most cases. This is how it happens: “Formaldehyde or glutaraldehyde fixes tissue or cells by irreversibly connecting a primary amine group in a protein molecule with a nearby nitrogen in a protein or DNA molecule through a -CH2- linkage called a Schiff base” ... To put it simply: formaldehyde literally rips apart tissue on a molecular level.

Formalin or formaldehyde is extremely toxic and can easily be absorbed through the skin.

Intravenous (or IV) fluids are used to infuse medications or fluids into the bloodstream of a living person. This process is effective for the living because of the process of circulation. As Wilde notes, the procedures of embalming differ dramatically from those of IV administration.

Although embalming fluid (which is around five percent formaldehyde) is eventually introduced via a completely different apparatus, that process takes place only after the cadaver is drained of blood and fluids.

Another question posed by many readers involved presence of formalin in the operating room. It is typically used for routine histology, and it was likely intended for the preservation and analysis of tissue collected during the operation. We contacted Wilde with additional questions about that subject, and he explained:

Although I do not use formalin, I understand that it is generally injected to preserve specimens in the same way we use a trocar, except with a smaller instrument like a syringe. Unlike arterial fluid, formalin is not injected through the arterial system but through a syringe-type instrument that is fanned throughout the entirety of the tissue. Formalin is so strong that if it were injected through the arterial system with an embalming machine, I would imagine that the strength of the fluid would make distribution difficult. It’s likely that formalin would in effect cauterize the capillaries and render the embalming incomplete, resulting in some of the tissue being unreached by the fluid and more susceptible to decomposition.

Fedyaeva's death remains under investigation, but initial reports indicated that a nurse mistakenly used formalin instead of saline to wash a surgical site. The patient was eventually transported to Moscow in efforts to reverse the damage, but she died a few days later. It appears that reports about inadvertent substitution of formalin for saline was correct, but the rest of the tragic medical mishap was misrepresented in many news accounts.

Stewart, Will and Danyal Hussain.   "Russian Woman, 27, Dies In Excruciating Agony After She Was 'Embalmed Alive' With A Formaldehyde-Based Drip Instead Of Being Put On Saline In A Horrific Medical Blunder."     Daily Mail.   8 April 2018.