The 'Rules for Teachers - 1872' list prompts us to marvel at the grimness of a late nineteenth century American schoolteacher's lot. 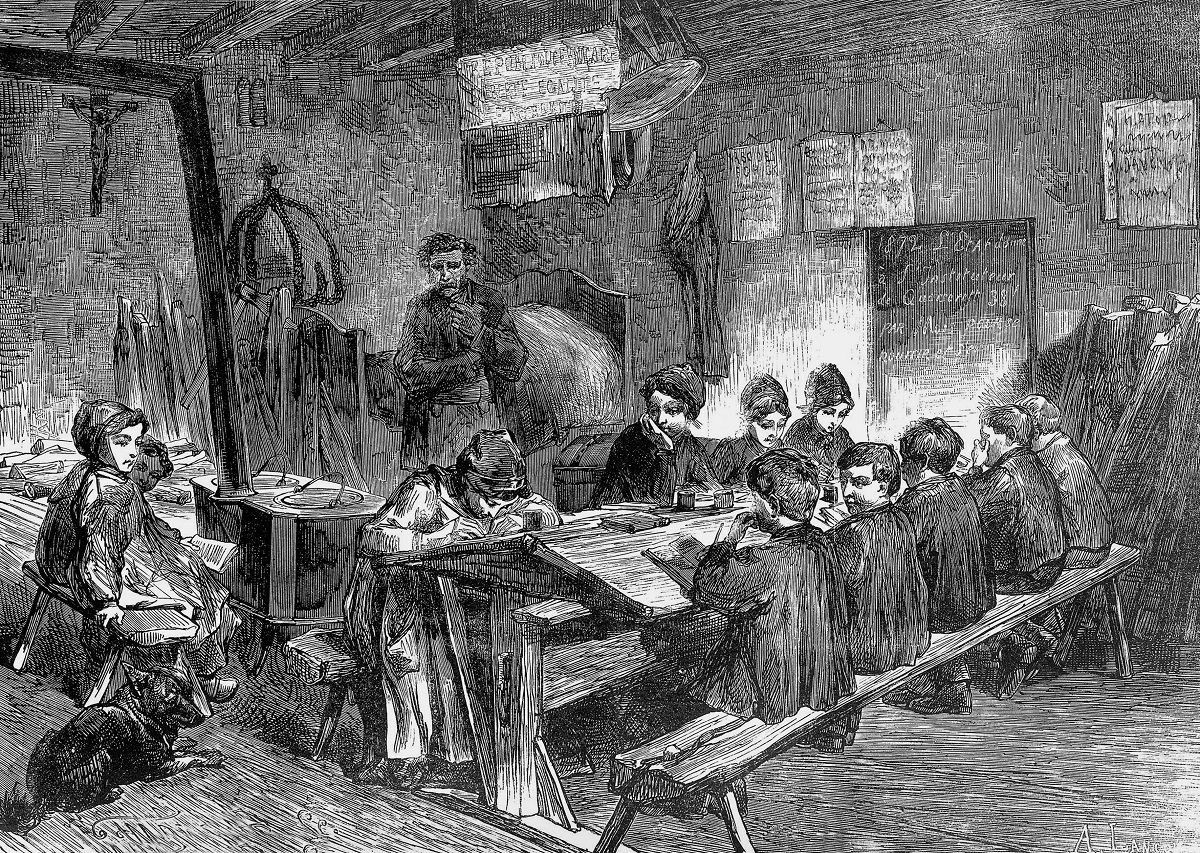 Yet another "the way we were" document of questionable origin intended to demonstrate by comparison how much better off we are today is the "Rules for Teachers - 1872" list:

2. Each teacher will bring a bucket of water and a scuttle of coal for the daily session.

3. Make your pens carefully. You whittle nibs to the individual taste of the pupils.

4. Men teachers may take one evening each week for courting purposes, or two evenings a week if they go to church regularly.

5. After ten hours in school, the teachers may spend the remaining time reading the Bible or other good books.

6. Women teachers who marry or engage in unseemly conduct will be dismissed.

7. Every teacher should lay aside from each pay a goodly sum of his earnings for his benefit during his declining years so that he will not become a burden on society.

8. Any teacher who smokes, uses liquor in any form, frequents pool or public halls, or gets shaved in a barber shop will give good reason to suspect his worth, intention, integrity and honest.

9. The teacher who performs his labor faithfully and without fault for five years will be given an increase of twenty cents per week in his pay, providing the Board of Education approves.

We're expected to take this list in and marvel at the grimness of a late nineteenth century American schoolteacher's lot: the profession was lowly regarded, the work was physically demanding and involved long hours on the job, the position paid poorly, retirement benefits were non-existent, and teachers were expected to be among the most morally upright members of their community. (Some modern teachers would probably agree that maybe things haven't changed so much since then after all.) But the bottom line is that no one has ever been able to verify the authenticity of this "Rules for Teachers - 1872" list.

The earliest iteration of this list that we've uncovered so far dates from 1959, when it was attributed to a school principal in Manhattan named Winifred Northrup:

This list has been reproduced in countless newspapers and books over the sixty years since then, and copies of it have been displayed in numerous museums throughout North America, with each exhibitor claiming that it originated with their county or school district. Any evidence documenting the existence of the original list remains elusive, however.

"Rules for Teachers - 1872" also been also offered in a number of different guises, such as a list of rules for sales clerks at W.T. Stewart's department store in New York, for floor nurses in a hospital, and for the employees of a New England carriage works. All attempts to trace this document to its origins inevitably dead end with a photocopy or printed sheet of indeterminate origin and suspiciously modern vintage.

As a point of reference, we visited a historical site in our neighborhood which included a restored 19th century schoolhouse, complete with a preserved contemporaneous list of instructions for teachers. The items on that list were rather mundane, directing teachers to follow protocol by taking regular attendance, using the assigned texts, etc. Nothing on the list involved manual labor or bore on the moral conduct of teachers' private lives.

Perhaps this piece tells us more about our contemporary vision of life in the 1870s than it does about life in the real 1870s.

Sometimes the document includes a list of equally onerous rules for students:

1. Respect your schoolmaster. Obey him and accept his punishments.

2. Do not call your classmates names or fight with them. Love and help each other.

3. Never make noises or disturb your neighbors as they work. Be silent during classes.

4. Do not talk unless it's absolutely necessary.

5. Bring firewood into the classroom for the stove whenever the teacher tells you to.

6. If the master calls your name after class, straighten the benches and tables, sweep the room, dust and leave everything tidy.

Another similar items purports to be a list of rules for teachers from 1915:

You must be home between the hours of 8 p.m. and 6 a.m. unless attending a school function.

You may not loiter downtown in any ice cream stores.

You may not travel beyond the city limits unless you have permission of the chairmen of the board.

You may not smoke cigarettes.

You may not under any circumstances dye your hair.

You may not dress in bright colors.

You may not ride in a carriage or automobile with any man unless he be your father or brother.

You must wear at least two petticoats.

Your dresses must not be any shorter than 2 inches above the ankles.