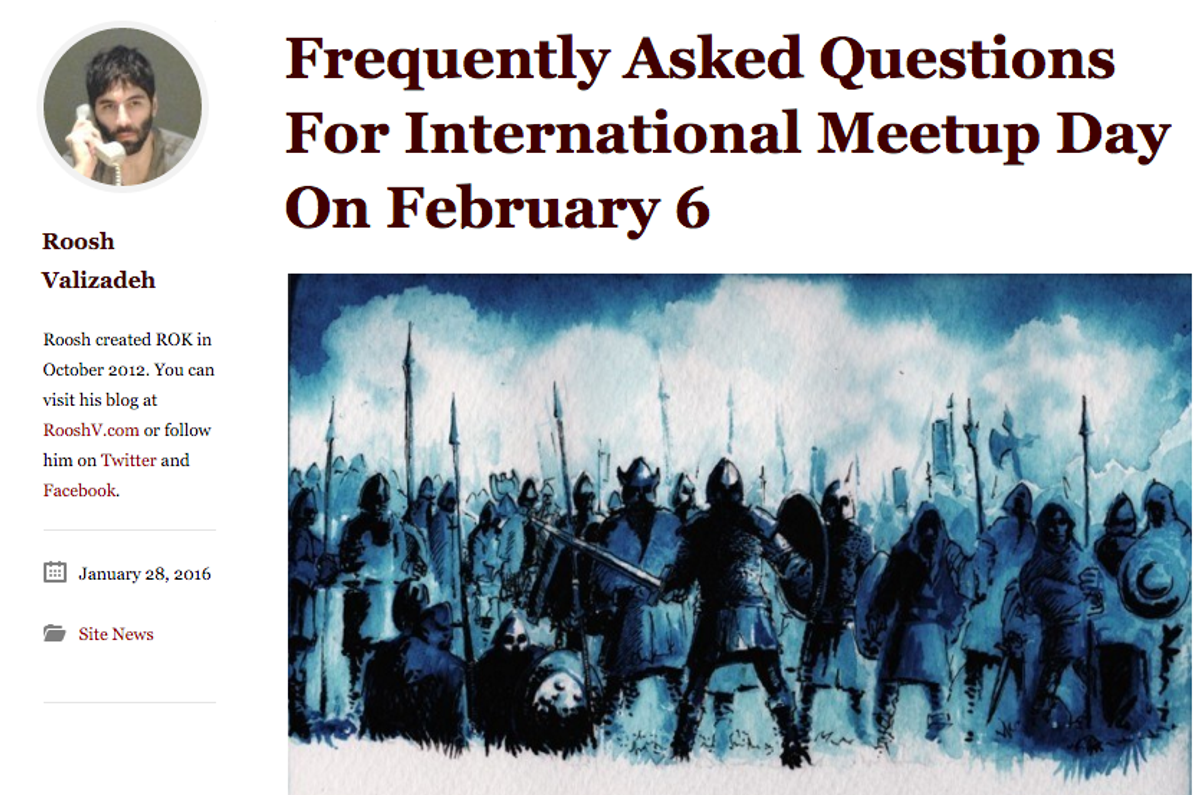 Men's rights "tribal meetings" were organized for 6 February 2016 via the Return of Kings web site; previous content hosted on that site advocated for loosening of rape laws or was generally misogynistic; on 3 February 2016, the web site cancelled all planned meetings.

In early February 2016, a number of web sites such as Raw Story published articles about a purported multi-country meetup planned for 6 February 2016 seeking to "make rape legal":

The spokesperson for a U.S.-based anti-woman group who advocates for "legal" rape has organized worldwide meet-up events in 43 different countries on Saturday.

On a website advertising the "Return of the Kings" event, self-styled "pick up artist" Daryush "Roosh V" Valizadeh has encouraged his misogynist supporters to "come out of the shadows and not have to hide behind a computer screen for fear of retaliation," The National reported.

The website promises 165 events in 43 countries at 8 p.m. local time on Saturday. Valizadeh has instructed his followers to go to a public location at each meeting area and identify themselves by asking, "Do you know where I can find a pet shop?" From there, group members will be taken to a secret meeting location ... Valizadeh argued on his blog last year that rape should be legal on private property.

"By attempting to teach men not to rape, what we have actually done is teach women not to care about being raped, not to protect themselves from easily preventable acts, and not to take responsibility for their actions," he wrote at the time. "I thought about this problem and am sure I have the solution: make rape legal if done on private property."

Valizadeh did indeed post a "How to Stop Rape" article in February 2015, paradoxically suggesting that the way to eliminate rape was to make it legal on private property:

By attempting to teach men not to rape, what we have actually done is teach women not to care about being raped, not to protect themselves from easily preventable acts, and not to take responsibility for their actions. At the same time, we don’t hesitate to blame men for bad things that happen to them (if right now you walked into a dangerous ghetto and got robbed, you would be called an idiot and no one would say "teach ghetto kids not to steal"). It was obvious to me that the advice of our esteemed establishment writers and critics wasn't stopping the problem, and since rape was already on the law books with severe penalties, additional laws or flyers posted on dormitory doors won't stop this rape culture either.

I thought about this problem and am sure I have the solution: make rape legal if done on private property. I propose that we make the violent taking of a woman not punishable by law when done off public grounds.

If rape becomes legal under my proposal, a girl will protect her body in the same manner that she protects her purse and smartphone. If rape becomes legal, a girl will not enter an impaired state of mind where she can't resist being dragged off to a bedroom with a man who she is unsure of — she'll scream, yell, or kick at his attempt while bystanders are still around. If rape becomes legal, she will never be unchaperoned with a man she doesn't want to sleep with. After several months of advertising this law throughout the land, rape would be virtually eliminated on the first day it is applied.

Valizadeh has since disclaimed that article as being satirical in nature, and some observers believe his Return of Kings site is far more of an online troll than a serious "men's rights advocates" group:

In fact, Return of Kings' anti-feminist position is so extreme that some commentators believe it is a "troll" group that exists solely for the purpose of upsetting people.

The site feature such headlines as "The myth of date rape drink spiking", "How to turn a feminist into your sex slave" and "How to convince a girl to get an abortion".

As referenced in the Raw Story piece, the National of Scotland published an article about the event which observed that the group would "exact furious retribution" against women who tried to crash their "tribal meetings":

CONTROVERSIAL American pick-up artist and rape advocate Roosh V has organised meetings in Edinburgh and Glasgow for next Saturday.

Only heterosexual men will be allowed to attend the meetings, and any women attempting to come along will be filmed with footage sent to his worldwide "anti-feminist" network who will then "exact furious retribution".

At 8pm next Saturday supporters of the militant misogynist will turn up at Glasgow's George Square and Edinburgh's Grassmarket to meet other men before heading to another, secret location ... On the website advertising the event, Roosh V writes that it is time for his supporters to "come out of the shadows and not have to hide behind a computer screen for fear of retaliation ... Up to now, the enemy has been able to exert their power by isolating us and attacking with shrieking mobs, but we'll be able to neutralise that tactic by amassing in high numbers come February 6. I will exact furious retribution upon anyone who challenges you in public on that date (remember to record them). Therefore let the sixth of February be a clear signal to all that we're not going anywhere. We have finally arrived."

@KevinMcGil This freak is at it again!! US ‘make rape legal’ group plans worldwide anti-woman event in 43 countries https://t.co/Vfh9o0On2u

@mikebairdMP You have daughters. Why are you not stopping this disgusting event from happening https://t.co/46pRAykxGX #auspol — julie boyd (@jboyded) February 1, 2016

On 28 January 2016, Valizadeh published a "Frequently Asked Questions for International Meetup Day On February 6" (FAQ) entry from which much of the subsequent media reporting on the event extracted a number of quotes, including the "furious retribution upon anyone who challenges [attendees] in public on that date" portion.

The FAQ confirmed that neither women nor homosexual (or "transsexual") men were welcome at the 6 February 2016 events, and offered the following advice about what to do if a "pretty girl" attempted to crash proceedings:

Get her number and then tell her to buzz off. Do not allow women to attend the meeting.

Directives for how to handle possible "feminist" crashers differed slightly but primarily focused on circumventing disruptions:

Record them with your camera, upload the footage to Dropbox, and then send it to me at roosh@rooshv.com afterwards so we can tear them up. If accosted during the meetup, travel to the final venue in pairs or triplets using an indirect route so the final location is not compromised (make sure you are not followed). While I wouldn't mind a bit of excitement, there is currently zero chatter online that a single meetup will be disrupted.

Valizadeh also denied charges that the meetups had a "white supremacist" bent and waved off concerns about infiltration by law enforcement agents:

The tribe is apolitical and does not attempt to challenge governmental authority, so I don't believe we'll be targeted for infiltration. That said, keep an eye on possible agent provocateurs who advocate for illegal activities out of the blue.

In an earlier post, Valizadeh described the manner in which attendees might identify themselves and listed all known meetup points:

To identify your fellow tribesmen, ask the following question to a man you suspect is there for the meetup: "Do you know where I can find a pet shop?" If you are asked this question, answer in the affirmative: "Yes, it's right here." You can then introduce yourself and get details about where to proceed at 8:20. If you ask someone for the pet shop and they appear confused or actually try to direct you to a real pet shop, they're not there for the meetup.

On a separate site, Valizadeh provided background on the scope and purpose of the event. Although Return of Kings regularly publishes material of an offensive nature regarding women, rape, sexuality, and a number of other matters, the description of the February 2016 events did not mention any of those topics:

The tribal meeting origin story begins in Poznan, Poland in early 2015, where I met two readers of mine on separate random occasions. We exchanged contact information and began meeting in a cafe in the center of the city every so often. In each meeting, additional men who were traveling through would drop by. Between 4-6 men would attend on average.

The meeting was regular enough that one of the men termed it a "tribal meeting." The name stuck and the meeting became an enjoyable male bonding session where we could have locker room banter, ask for advice, tell stories, and share ideas for a couple of hours before heading to the nightlife district for an additional drink or two.

I received so much value from the meeting that I aim to spread the concept further so that more cities can have an active tribal meeting that men could attend.

In the second half of 2015 I created the Tribal Meeting concept with this web site and soft-launched it on RVF, which resulted with the creation of two new tribes. In January 2016, I introduced the idea on the rest of my sites.

The tribal meeting will allow masculine men to regularly bond and converse with each other while providing support in the case conflict or disturbances affect their city or nation.

Valizadeh's Return of Kings blog regularly publishes offensive, misogynist, and rape apology-themed content, but the event in question wasn't openly billed as promoting rape (or misogyny). The event's listing described a planned meetup to "allow masculine men to regularly bond and converse with each other," although it was a meetup to which neither women nor gay men were to be welcomed.

Due to adverse publicity generated by the announcement of the multi-country event, on 3 February 2016 Return of Kings posted that the meetups had been cancelled, citing privacy and safety concerns as the reason:

I can no longer guarantee the safety or privacy of the men who want to attend on February 6, especially since most of the meetups can not be made private in time. While I can't stop men who want to continue meeting in private groups, there will be no official Return Of Kings meetups. The listing page has been scrubbed of all locations. I apologize to all the supporters who are let down by my decision.