A Tumblr post mischaracterizes the two Confederate leaders' positions after the Civil War. 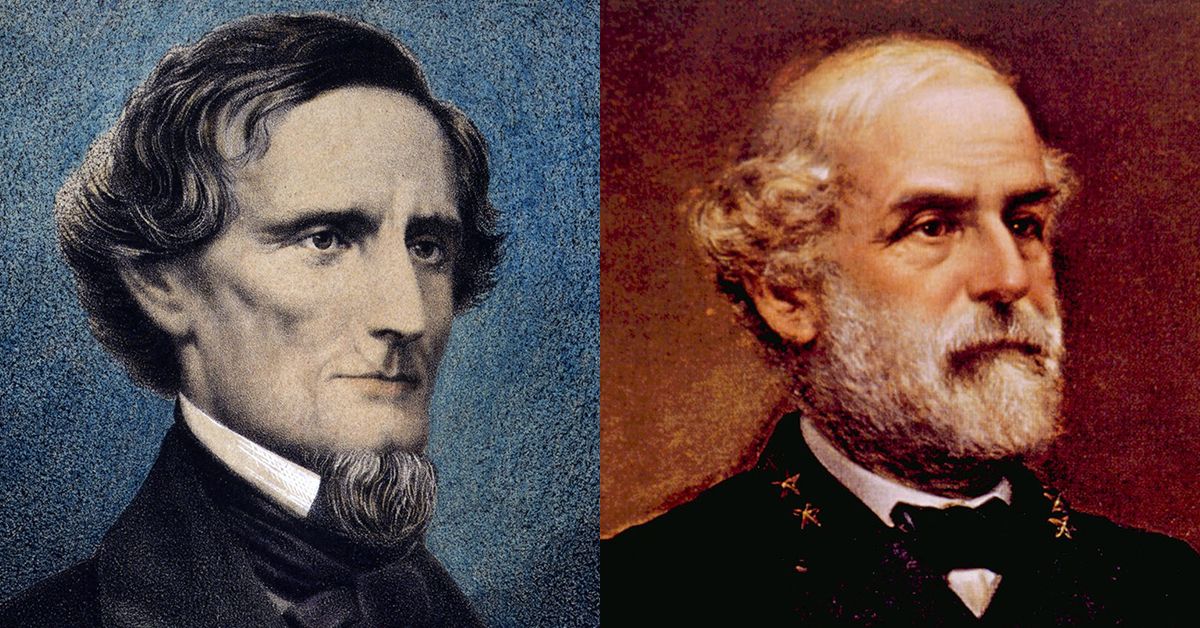 Claim:
Both Robert E. Lee and Jefferson Davis disavowed the Confederacy after the Civil War.
Rating:

Robert E. Lee did not wear his Confederate uniform after the war and was not buried in it.

Lee never called the Confederate battle flag a "flag of treason"; Jefferson Davis did not disavow the Confederacy after the Civil War.

A 2015 Tumblr post arguing that after the Civil War, Confederate Army Gen. Robert E. Lee disassociated himself from his cause received renewed attention amid a national controversy about the preservation of Confederate statues and monuments in August 2017:

Robert E. Lee himself refused to wear his confederate uniform after the confederacy’s defeat in the American civil war. At his funeral he was not buried in it and no one in attendance was permitted to wear theirs either. He also declared that his confederate battle flag (what we now call “the confederate flag”) never be raised again and that it was a flag of treason.

So there’s your “southern heritage.”

On 5 August 2017, a second Tumblr user, girly-friday, expanded the claim to include Confederate President Jefferson Davis and added citations:

Not Just Robert E Lee, which you can read here.

but Also the President of the South, Jefferson Davis felt the same way.

Basically, “Get the fuck over it.” We lost, we’re a part of this country, this flag signifies an old identity. Cut that shit out and move on.

However, Judith Giesberg -- a history professor at Villanova University and the editor of the Journal of the Civil War Era -- questioned the citations made in the post, telling us, "I would not read those documents that way at all."

Giesberg and two other experts we contacted took issue with several of revelation19 and girly-friday's claims, which we have broken down below:

Robert E. Lee refused to wear his Confederate uniform after the war and was not buried in it: TRUE

One of the citations girly-friday linked to was the statement Lee reportedly made when declining an invitation from the Gettysburg Identification Meeting committee, which was quoted in The South Atlantic Quarterly, Volume 10, published in 1911:

I think it wisest not to open the sores of war but to follow the example of those nations who endeavored to obliterate the marks of civil strife and to commit to oblivion the feelings it engendered.

Barton A. Myers, an associate professor of history at Washington & Lee College -- the university where Lee served as president from 1865 until his death in 1870 -- agreed that Lee "definitely discouraged" the commemoration of Civil War battle sites such as Gettysburg.

"He really did believe that those were public events and public commemorations that might cause additional animosity between the North and the South," Myers said, adding that Lee was also facing federal treason charges after being indicted by a grand jury. He was never formally tried by a jury, but U.S. Gen. Ulysses S. Grant at one point threatened to resign his commission if Lee was ever arrested.

Not only did Lee not wear his uniform in public, Myers said, but the post is correct in stating that he was not buried in it. His U.S. citizenship was not restored until 22 July 1975 by then-President Gerald Ford.

Mourners at Lee's funeral were barred from wearing their own Confederate uniforms: UNPROVEN

A photograph credited to the American Civil War Museum reportedly shows mourners attending Lee's funeral on 15 October 1870 in their Confederate uniforms. But Historian and author Kevin Levin told us in a phone interview that he "would be shocked" if that were the case:

One thing to keep in mind is that during Reconstruction in Virginia, ex-Confederates were prevented from wearing their uniforms. They weren't allowed to do so. Even wearing buttons from their uniforms was deemed illegal.

There is this effort on the part of occupying federal troops to outlaw these sort of flagrant displays of continued loyalty to the Confederacy. We also know that in some cases, men are being arrested for wearing their uniforms, that they're doing tricky things like cutting off the buttons but still wearing them. It's all sort of a theater of resistance.

We contacted the museum seeking more information about the photograph, but have yet to receive a response.

Levin refuted this claim from the post, while saying that -- despite urging both sides to "move on" in public -- Lee hid many of his own feelings following the war:

Privately, he is still upset about emancipation, the end of slavery; he is upset about African-Americans possibly getting the right to vote. Those are thoughts that he shares with a few people. He's not writing about it, but by the end of his life in 1869 he had been planning to write an autobiography. He had started collecting material for it but he died too soon. That is part of what makes Lee so attractive to people who want to defend the Confederacy. You can turn him into whatever you want to. He doesn't bare his soul after the war.

Lee's testimony before the Joint Committeee on Reconstruction on 17 February 1866, also left it unclear whether he disavowed his Confederate service, since he was never asked that directly.

In arguing that Davis had renounced his ties to the Confederacy, girly-friday cited a quote from his 1881 book The Rise and Fall of the Confederate Government, Volume 1:

My pride is that that flag shall not set between contending brothers; and that, when it shall no longer be the common flag of the country, it shall be folded up and laid away like a vesture no longer used.

The rest of that [book] is about defending that war as a noble war and defending all of those of his generation who participated in it. I would not want to interpret that quote there without putting it in its full context.

Similarly, Levin said that Davis was likely speaking "metaphorically," since the Confederate battle flag had not gained acceptance as a public symbol at the time he published the book:

The battle flag was for the most part displayed in a very limited way, almost always by Confederate veterans, at veterans' reunions. Many of these guys in their older years are living in what were called "soldiers' homes." So for special events at these places, they would bring out flags. But they were usually the original flags. They were not the imported kind from China. Don't think of the context of this as, "There is some big debate regarding the Confederate flag." That debate happens much later. It's not until like the 1930s and 40s that it becomes a popular cultural symbol.

Davis's book gave a revisionist history of the Confederate states' rational for seceding from the Union, said Levin:

One thing ex-Confederates understand after the war is, they may have lost the war but who writes the history and who tells the stories? There's a potential victory in that. They don't want the Northerners to write the history and paint them as the villains. What historians call the "Lost Cause" is all about saving face. It's all about announcing to the world that "We lost militarily but we remain justified. We are still God's chosen people."

Levin added that Davis had rebranded himself as a "symbol of what was lost." Besides repositioning its cause as a "states' rights" issue Davis mounted a popular tour of the South after the war alongside his daughter Varina Anne Davis, who became known as the "daughter of the Confederacy" -- a much more visible position than Lee. Levin said:

Davis and Lee, they did not see eye-to-eye on how to move forward. Davis did not want to give up the cause, even though he's revising the cause for which they fought -- it's no longer about slavery, it's about "states' rights" -- he wants this memory of the Confederacy to live on. He's a bit more defiant than Lee ever could have been.

Giesberg noted that Davis' book was "one of the earliest so-called 'official histories of the Confederacy'" to attempt to redefine Southern grievances, and pointed to a similar shift in rhetoric from his vice-president Alexander Stephens, who went from calling slavery a "cornerstone" in 1861 to saying seven years later that the Confederate states had fought against "the Demon of Centralism, Absolutism, and Despotism."

Myers also drew a link between Lee's public reputation and Davis' ability to recast himself after the war:

Part of the reason that Davis could participate in the cult of the “Lost Cause” myth was that he was still alive. Much of the intellectual architecture of the myth is created in the years following Lee’s death in October of 1870. Many speeches from former generals like Jubal Early and William Nelson Pendleton contributed to the foundation of that myth, and those come in the wake of his death. People move from admiring Robert E. Lee in the South to seeing him as a virtually infallible figure during the decades after his demise.

Dew, Charles. Apostles of Disunion: Southern Secession Commissioners and the Causes of the Civil War. 2001.

"Report of the Joint Committee on Reconstruction, at the First Session Thirty-Ninth Congress." 1866.