A post condemning the Black Lives Matter Movement is frequently attributed to Richard Sherman, but the NFL player denied authoring it. 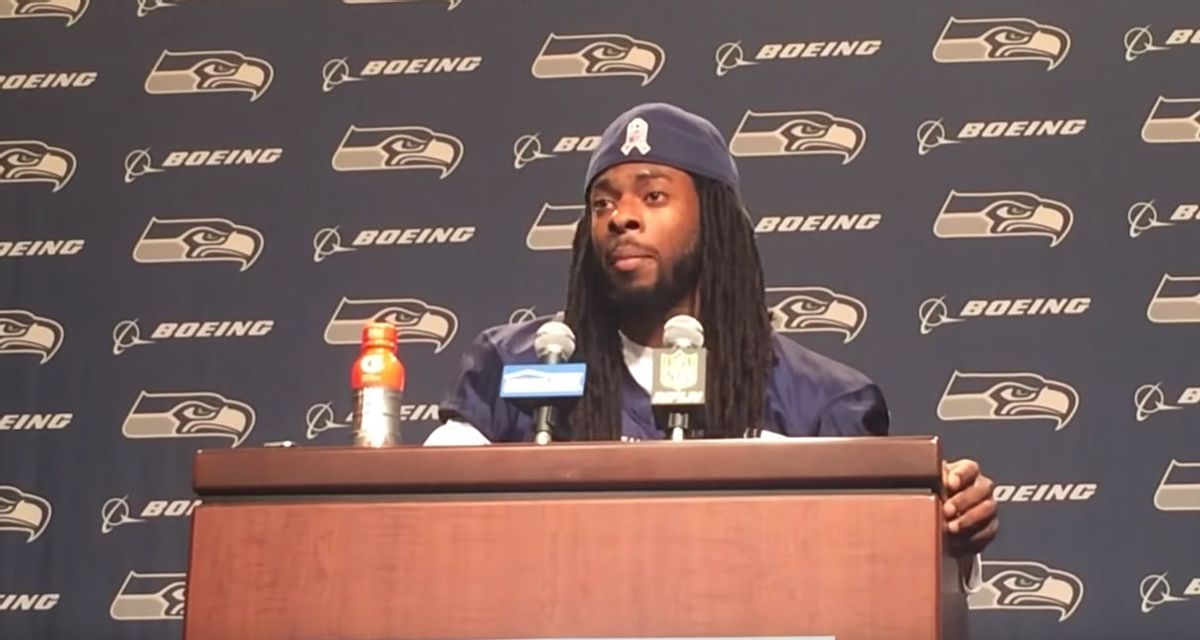 Seattle Seahawks cornerback Richard Sherman is an NFL star. And he just made it clear, he wants NOTHING to do with the Black Lives Matter movement… especially their more violent members.

King Noble is a controversial leader in the Black Lives Matter movement, and used Sherman’s image in a violent cartoon calling for the killing of white people.

Now, we’re learning Sherman allegedly fired back with a FURIOUS response. There is rough language here, and it is definitely not safe for work (NSWF):

Although these articles were pubished on 10 July 2016 (not long after five police officers were killed by a sniper at a Black Lives Matter protest in Dallas) they actually refer to a message posted in September 2015.

Ending The Fed did not provide this information, instead misleading readers into thinking that the story was current; they added fuel to the fire by including a screenshot of the rant attributed to Sherman, bearing the timestamp "6 days ago":

I did not believe this when I heard about it. I watched your videos. I started a life in the gehto. I banged like a fool till I woke up. I was not suppressed by any man or woman, white or black.

I worked myself up from Compton High School to a scholarship at Standford University and I did it myself. I take pride in what I have accomplished both as a black man, and an athlete. I could have stayed in LA and banged and used drugs and thought that it was all the white mans fault. But that would be a lie. We are who we want to be, that is what is great about america. We are all born with the same chances in life..white or black…YOU choose to be a woman-abusing racist loudmouth. I would love to debate you on national tv. And if you condone senseless black shootings of whites and police officers, you better make that a debate on Springer, so I can bitchslap your ignorant ass!

You are what is keeping and making the black race look bad. Wake up fool. Do not glorify this half a man, he has worked for nothing. He chose to keep himself where he is, not the white people. It is time to take responsibility for your own actions, and not act like a stinking fool. Kids and young black men and women look at this site, and believe that they are abused. That is a bold-faced lie. It is out of the mouths of cheap thugs like you that are hurting our young and taking away the chances they have to make themselves a productive part of society. Brothers and sisters: the only slavery in america now is the one you put yourself into Rise up like Doctor King as taught us, and be a real human being. We are all in this together white and black. Peace to all and I hope this stupid fake hate stops real soon. We are all brothers and sisters. Do not be fooled by the tyranny of evil men like this lift yourself up educate yourselves and work hard for a good life [sic]. No one owes you anything stand proud as a person of color , and do something meaningful with your life. I did and I am the best at what I do! Peace out, R Sherman.

Richard Sherman did not author the post displayed above, nor did he write it in response to the shootings of Dallas police officers. The message originally circulated in September 2015, after a meme featuring a photograph of Sherman was included in a blog post purportedly written by radio host King Noble calling for an "open season on killing white people and cops." At the time, Sherman flatly denied writing the post: Before reporters could even ask him a question at his weekly press conference, Sherman brought up the issue.

"I did not write that article," said Sherman, who said some people had sent it to him over the weekend.

It all started with a blog post purportedly by Atlanta-based activist "King Noble," who in a recent video called for an "open season on killing white people and cops." The blog post purportedly showed a meme of Sherman with his arm around running back Marshawn Lynch with the caption, "When we gon Kill These KKKrakas Bro."

That blog post led to the response by someone claiming to be "R Sherman" and included a picture of Sherman as the avatar.

Sherman said the impostor's response was poorly written, but did have some points he agreed with.

At the same press conference, Sherman gave his own thoughts on the Black Lives Matter movement:

"I don't think any time's a time to call an all-out war against police or any race of people. I thought that was an ignorant statement but as a black man, I do understand that black lives matter. I stand for that. I believe in that wholeheartedly but I also think there's a way to go about things and there's a way to do things."

As yet, no one has claimed authorship of the posting that was originally attributed to Sherman.